Had it not been for COVID-19, the skies over Japan, from Hokkaido to Okinawa, would’ve been blazing with the brilliance of hanabi fireworks nearly every weekend in July and August.

Every year, the season is host to over 80 fireworks festivals all over the country. This tradition dates back to the Edo Period when, in 1733, Shogun Tokugawa Yoshimune, ordered a fireworks display at a festival on the Sumida River to ward off an evil spirit thought to be behind epidemics and poor harvests. 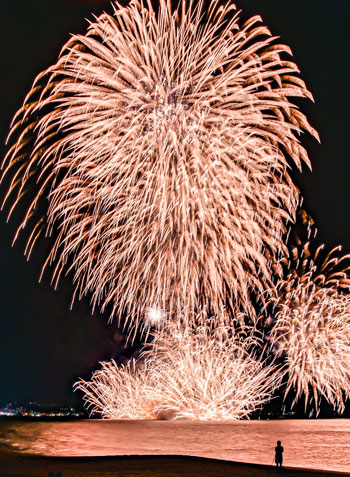 Today, these summer festivals serve as the peak of a city or town’s summer festival. Whether viewed from the banks of one of Japan’s many rivers, on a yakatabune houseboat, or on a beach, these displays draw a crowd eager to see the bright color and sounds of the summer.

These firework shows are so elaborate, they’ve garnered worldwide attention for the perfect shapes, exquisite colorings and enormous sizes, as well as the excitement they instill in their audience. In many cases, a single firework changes colors two to three times after it is launched.

Many festivals are created around the evening fireworks displays with food, entertainment booths and those yielding yukatas arriving early to reserve a prime spot for the main event. 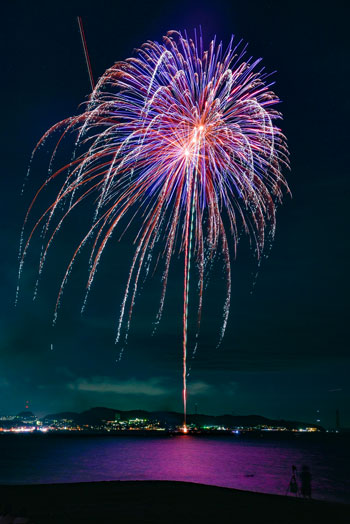 But this summer tradition, like so many others, will be different this year. In early June and again in July, a group of over 160 pyrotechnicians organized a “Cheer Up” Fireworks Project illuminating the skies again but in unannounced, secret times and locations. These displays were as the name suggests— to cheer up the masses during this difficult time, encourage people to stay home, and to motivate frontline workers fighting COVID-19.

There are more secret fireworks planned through this project for the rest of the summer season, so keep your eye on the sky! (Or, if you missed them, check social media for the videos and images others are sharing.)