IWAKUNI, Japan -- “Don’t let your accomplishments define you. If you let one define you, then you will become that very thing forever. Always keep climbing for more," said U.S. Marine Corps Sgt. Nahla Beard.

Beard has been stationed at Marine Corps Air Station Iwakuni, Japan since 2019. Beard is of Iranian descent; her parents emigrated from Iran to the U.S. when they were in their 20's to start a new life in California.

She is now an Air Traffic Control supervisor with Headquarters and Headquarters Squadron who values physical fitness and is routinely setting new goals for herself and her fellow Marines.

“I wasn't always into physical fitness,” said Beard. “ Just basic levels that were required of me, but during my second year in the military I hurt my back pretty badly which took almost nine months to recover from. When I felt like I was back at a hundred percent, I really started getting into fitness so I would avoid getting injured again.”

She started by putting more effort into aerobic physical training sessions that furthered her cardiovascular ability, with an emphasis on stretching afterward, which she says is something that some service members neglect from time to time.

“It's not all about running and doing max pull-ups” Beard said. “In my experience, people don't really take the time to have PTs that are dedicated to mobility and stretching.” 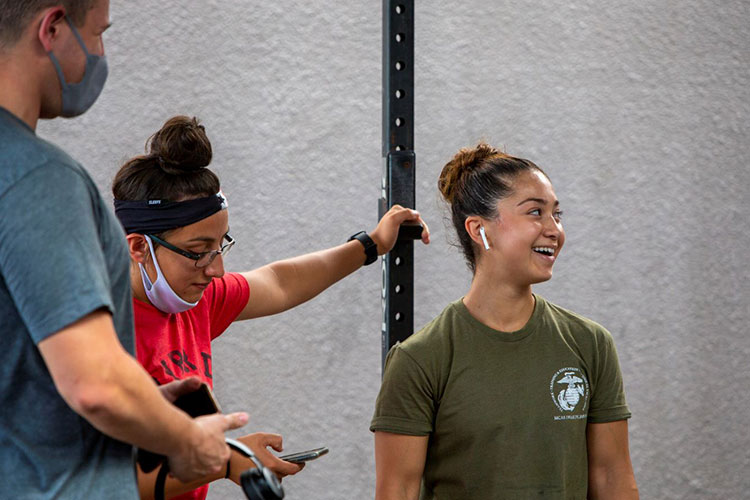 When Beard was a corporal, she led her shop in a PT program where they worked on their mobility and stretching. In a few weeks' time, her Marines improved in their physical capabilities drastically and became significantly more proficient in their annual physical fitness evaluations.

She continues to focus on her agility and aerobic drills in order to improve her abilities and her resilience to injury, driven by a desire to never be in a physical slump for a long period of time again.

Her motivation to stay free from injury eventually culminated in a desire to push herself to the apex of her abilities. Beard was getting stronger, faster, and more efficient with her movements, and she began to develop a strong proclivity for a specific exercise that is one of the cornerstones of cardiovascular fitness: burpees. “I got into high intensity tactical training for a really long time and participated in the HITT competition they had on base,” Beard said. “That was really fun. It built my stamina to the point where I was able to do a lot of burpees and then that's when I looked up the world record out of curiosity.”

For a time, Beard volunteered as a Physical Fitness Test Regulations for H&HS when the unit was running low on CPTRs. Over time, she decided to get certified, and now she conducts her own PFTs and CFTs with the H&HS operations office, or S-3.

Beard would later attempt the Guiness World Record for most chest-to-ground burpees in one minute for the female category. With three months of rigorous training to make sure her form was flawless, Beard would have to give all she had -- and more -- in order to break the record.

With the rules for a chest-to-ground burpee being different from a regular burpee, Beard wanted to make sure she did exactly what the rules dictated for the Guiness world record.

“During my three months of training I did a lot of burpees while timing myself and kept trying to break my last record. I then set it up according to the rules they had and tried to do it within the time limit .” -  U.S. Marine Corps Sgt. Nahla Beard

In order for her to perform the correct technique for the burpees, she had to make sure her arms were extended out by her sides when her chest was on the ground, and when she jumped up in the air and landed, her feet and hands had to be the correct distance from tape markings on the ground.

On August 14 2021, Beard decided to put her body to the test and attempt to break the world record.

“It was a really cool day because a bunch of the command on base showed up with friends and family,” Beard said. “I ended up attempting five times on the same day because I wasn't sure if I did it.”

Beard was uncompromising in her approach, deciding to do it multiple times to ensure that success would be hers that day and that all the hard work she put into herself would pay off and be symbolized in the coveted world record plaque.

“It was super nerve-wracking,” claimed Beard. The on-going coronavirus pandemic meant that she was not able to compete for the world record with a Guiness judge in person and instead had to record herself and submit her attempt virtually. “They had more delays than usual because it was the time of covid. They kept on emailing me asking for more evidence to help verify it more. When they gave me their final email my heart dropped for a bit when I saw the word ``congratulations.”

She was elated by the good news. She achieved something that she could not have even dreamed of accomplishing just a couple of years ago. But with world record plaque in hand, it was all too real.

When asked if she would be attempting to break other Guinness world records, she did not keep it out of the question.

“Right now, I'm focusing more on powerlifting,” Beard said. “I’m trying to get my numbers up for that. A year ago I was in the 500 pound club and just last week I made it to the 700 pound club.”

Beard is now working on getting her bachelor’s degree in nutrition to further her education with fitness and perhaps make a career out of it.

Beard continues to inspire others with her initiative and physical prowess, showing others to never have a single incident define who you are for the rest of your life. Despite her early injuries, she built herself up stronger and more capable than before and achieved something that relatively few have ever accomplished.