Sandi Anderson-Watanabe works on a kirie of a Red-Billed Tropicbird at the Camp Zama Library May 6. Anderson-Watanabe’s kirie works are on display at the library for another eight weeks. In addition to being an artist and writer, she is also a Navy veteran about to complete her fourth year as a third-grade teacher at Camp Zama’s John O. Arnn Elementary School. Photo by Winifred Brown

CAMP ZAMA, Japan (May 8, 2019) – Sandi Anderson-Watanabe has always been an illustrator and writer, but it wasn’t until she began helping her husband with his job at a Japanese art museum that she learned about the art form of kirie.

In Japanese, kirie literally means “cut picture” and it involves cutting a single piece of paper to create an image. Her husband, Shigehiro Watanabe, was the assistant manager of the Fujikawa Kirienomori Museum in Minobu, Japan, and although her discovery of the art form came randomly, it appealed to her for several reasons.

“It’s a really different kind of form art because once you get done with your sketch, it’s actually a cut-out piece that you can hold up and look at,” said Anderson-Watanabe, whose kirie artwork is on display at the Camp Zama Library for another eight weeks. “It’s not as (two-dimensional) as a regular sketch. I thought I’d try it and I really liked it.”

Anderson-Watanabe, a Navy veteran about to complete her fourth year as a third-grade teacher at Camp Zama’s John O. Arnn Elementary School, began creating kirie in 2012. Since then, two Guild of American Papercutters annual art books have featured her work, and the Fujikawa Kirienomori Museum’s International Cut Paper Art Competition and National Cultural Festival displayed her work as a top-50 pick in 2013.

The display at the library includes several of her larger pieces, which feature, for example, a large pelican, called “The Pelican Queen,” a dragon, and a boy riding a bike with huge wings on his back. In addition, the kirie illustrations she used for her children’s book “This Is Piffiny Muckledorn Macabee Oogley Thorpenstein” are on display.

Visitors can also see her other books, “The Secret Stable,” a chapter book for children in grades four through six; “Tennis Shoe Samurai,” a novel; and “I Am a Super Artist!,” a children’s book.

Anderson-Watanabe, who holds a bachelor’s degree in psychology and a master’s degree in early childhood education, said that although she doesn’t hold a degree in art or writing, those subjects have always been a part of her life.

Originally from Davis, California, she has three children: Ava, 19; Ryu, 5; and Carina, 4. She has dedicated works to them, as well as to her mother.

Nature has also served as an inspiration for her work, Anderson-Watanabe said.

“‘The Pelican Queen’ is a reminder that nature is the true keeper of the earth and the need to respect and revere the creatures and resources that exist here,” she said.

Anderson-Watanabe said she bases her works on her own original sketches. She places a sketch on top of a single piece of black paper, and using the sketch as a guide, cuts out the picture with an X-Acto knife through both pieces of paper. When she is done, she displays it against a white backdrop.

She largely keeps to the traditional black-and-white color scheme because she likes the stark contrast, she said, but when it comes to the art of paper cutting, it doesn’t have to be that way.

“Different artists do it all differently,” Anderson-Watanabe said.

For example, Polish paper cutting artists use all different colors and use big sheep shears when cutting, Anderson said. The Polish call the art form “wycinanki.”

Anderson-Watanabe said she will sometimes add a little pop of color to her works, and plans, for example, to add a red bill to the picture of a red-billed tropicbird she is currently working on.

Anderson-Watanabe said the art form can be challenging, and it is sometimes necessary to change knife blades often because the tips break off.

Anderson-Watanabe said she starts at the center of a work and cuts her way out to the edges to reduce tearing.

“A lot of people ask me if I make mistakes and I say, ‘Oh yeah, I can see them all,’” Anderson-Watanabe said. “I’m like, ‘You know what? It’s a mistake, but it’s not, because if you cut too much or slip or something, you just either change it or you don’t say anything so nobody notices,’ but I know where they are.”

Anderson said she created most of her larger works from 2012 to 2014, when she was transitioning from Navy life to civilian life and worked part time as an English teacher.

Although she does not have as much time for large works of kirie these days, she still finds time for gifts and creating smaller works from the occasional idea, she said.

“It’s time-consuming, but it’s kind of like one of those relaxing Zen things—kind of meditative—where you’re just cutting all these little details, and then when it’s done, it’s just amazing to cut out the edges and hold it up,” Anderson-Watanabe said. “It’s a really satisfying type of art to do.”

“Once you start, it’s kind of hard to stop,” Anderson-Watanabe said.

Jim Lacombe, supervisory librarian at the Camp Zama Library, said Anderson-Watanabe’s work is inspirational and he is proud to have it on display.

“When people come to libraries, they don’t have all the answers,” Lacombe said. “They are sometimes looking for answers and to broaden their perspective, and this does it. They learn about something new, and they see that somebody in their own community did it.” 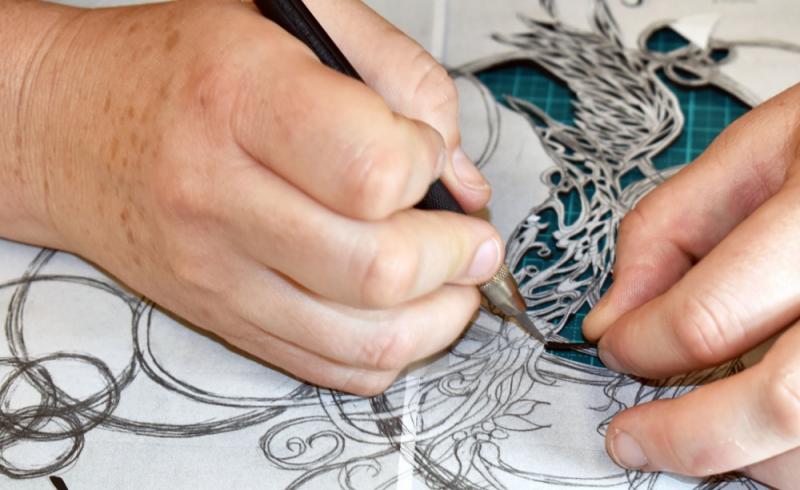 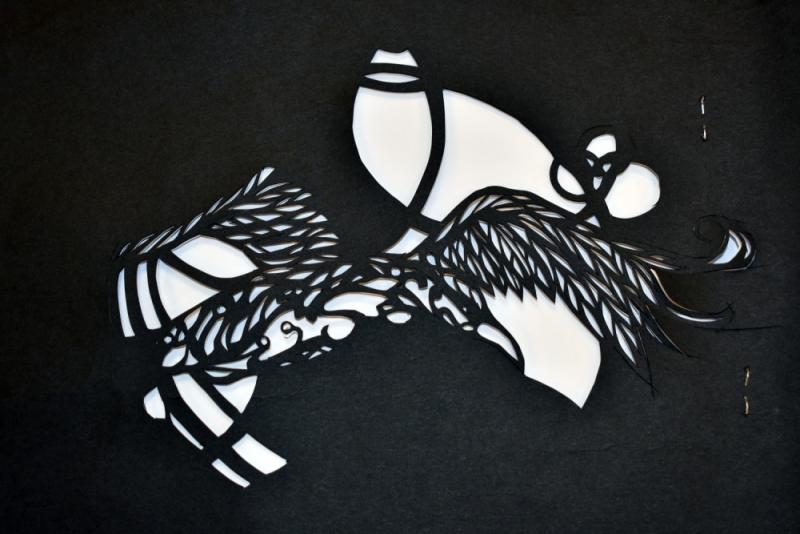 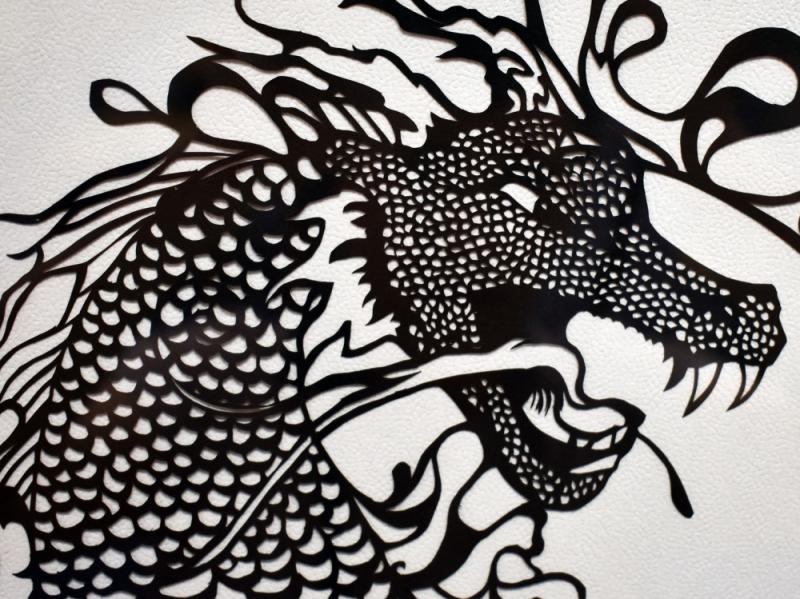 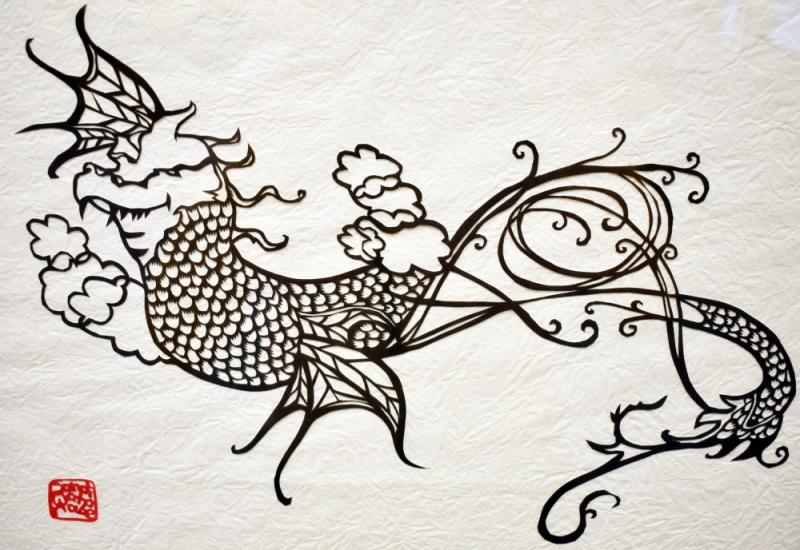 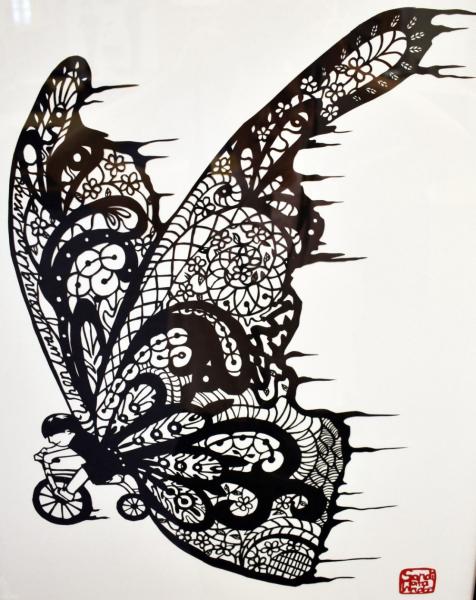 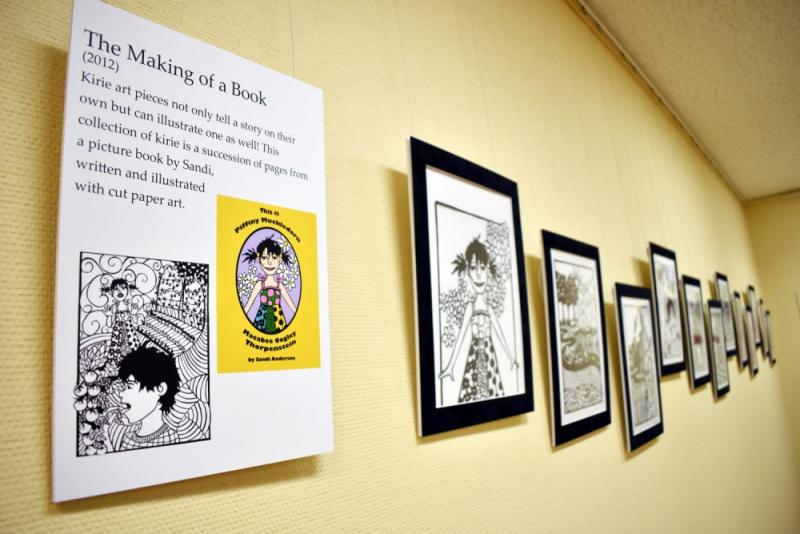