There are handful prominent soba noodle shops in Shuzenji, such as Bokunenjin, Yamabiko and Zenpuutei Nanaban. They are, however, always crowded with tourists on weekends and throughout the autumn leaves season.

Located a little outside the center of town and near Shigetsudo Temple, you’ll find a soba joint called Shigetsuso. It offers a tasty soba noodle lunch for a good price and less waiting in line.

The place is housed in a former traditional Japanese inn. According to a staffer, the inn was closed in 2016, and some of the employees began running the noodle shop using the inn’s lobby. Old wooden tables, counters for receptionists, a grandfather clock and various scriptures made us feel as if we were staying at the inn.

We ordered the soba noodle lunch with locally produced wasabi, dumplings and orange for 500 yen. After receiving a discount because the dumplings and oranges had run out for the day, we got our soba in about 10 minutes. The noodles were placed in two places on the plate, so that we were able to sample it with broth and wasabi separately. The noodles were smooth and tasty, although not very chewy. The fresh local wasabi really stood out and helped the flavor of the noodles with its stimulating aroma. The broth made from kelp stock also went very well with the cold white noodles. 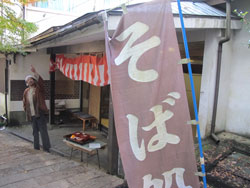 Slurp Japan’s buckwheat noodles with a stunning view of bamboo