Why not hop onto the bullet train and be whisked away to Kyoto? Expect narrow winding streets that ooze quintessential Japanese charm and atmospheric gardens with stunning foliage views.

Kyoto is a true embodiment of Old Japan awash with beautiful vestiges of its past glory. With its celebrated centuries-old wonders, breathtaking temples, serene Zen gardens, narrow cobbled alleyways, bustling markets and vibrant nightlife, Kyoto effortlessly blends the past and present to create an alluring destination. During World War II, Kyoto was spared from the majority of the destruction and as a result, is one of the best preserved cities in Japan that spoils visitors for choice of magnificent landmarks.

What do you feel when you are about to travel to the City of Ten Thousand Shrines? I know I felt excited, thrilled and utterly overwhelmed. Even though my expectations and pedantically compiled itinerary where firmly set, I was in for a big surprise. I imagined a little cozy town where temples are compactly huddled within walkable distance from each other and the atmosphere is nothing but Zen-inducing and tranquil. Yet I was greeted by a sprawling metropolis and all the hustle and bustle that comes with it. I also thought Kyoto was all about cobbled streets, old wooden teahouses, ancient shrines and meticulously maintained gardens. Yet I faced a city with highly developed urban landscape, modern shopping complexes and Western-style restaurants.

Kyoto certainly turned out to be multi-faceted, a place where the modern and the age-old harmoniously blend and coexist. Every nook and cranny in this enchanting city hides its own gem ready to be discovered and marveled. While naming the best places to see in Kyoto makes me feel a bit uncomfortable (there are way too many and every one of them is individually striking and special), there are still some landmarks which would be an absolute pity to miss. That’s why I compiled my list of Top 10 Breathtaking Spots in Kyoto to assist you in better prioritizing your list of places to see in Kyoto: 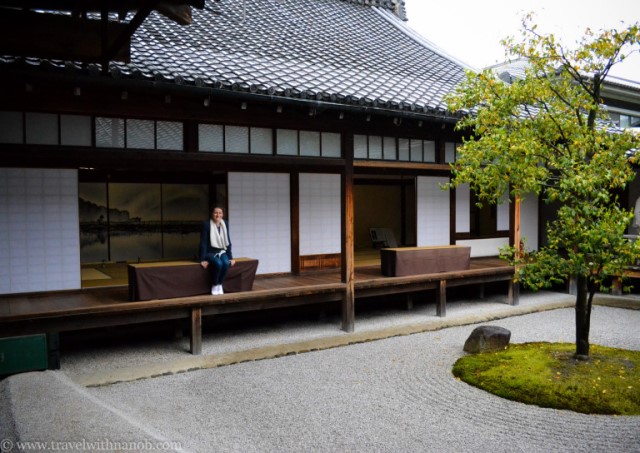 Founded in 1202 Kennin-ji is the oldest Zen temple in Kyoto. Due to the lack of visitors, the place oozes serenity and is an absolute gem. You could spend hours here walking in its wooden hallways, marveling the painted sliding doors and woodwork, admiring the extraordinary landscape and just soaking up the tranquil Zen atmosphere. 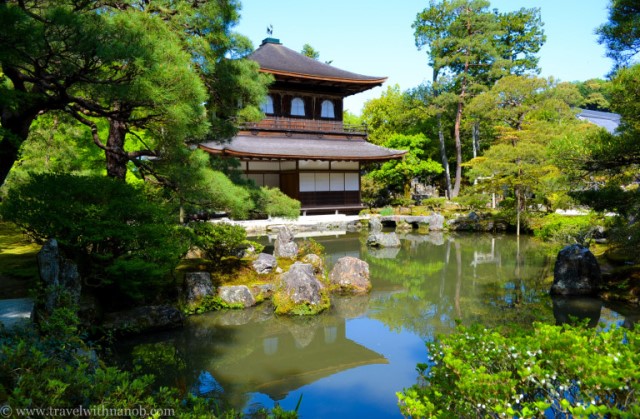 Another place that irrevocably stole my heart was Ginkaku-ji Temple, a.k.a. Silver Pavilion. Built in 1482 by the grandson of Ashikaga Yoshimitsu, shogun who built the famed Golden Pavilion, as his retirement villa. Unlike its opulent golden sister, Ginkaku-ji is an exercise in elegance an restraint, although the gardens surounding it is much more impressive. An expansive, meticulously maintained dry sand garden, known as the “Sea of Silver Sand” lays side by side with a mesmerizing verdant moss garden and tranquil woods on the hillsides, creating contrasting yet harmonious landscaping characterized by the traditional Japanese gardens.

After your tour of Ginkaku-ji you can also take a quiet and relaxing stroll along the Philosopher’s Path. Tucked away in the lush foothills of the mountains, the path winds along a canal which is lined up with quaint cafes and boutiques. 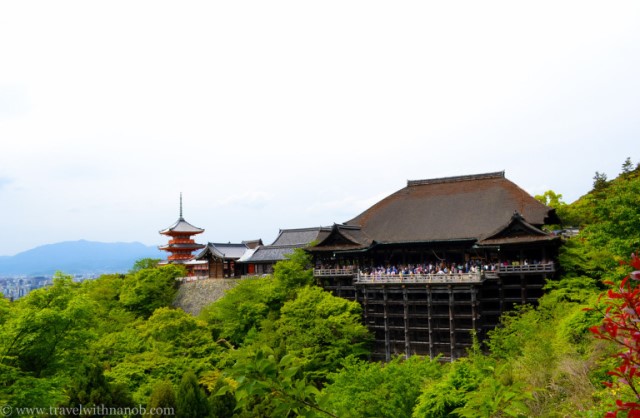 A stroll up the steep cobbled street in Higashiyama, will take you to Kyoto’s iconic Kiyumizu-dera, or Pure Water Temple. While it is sprawling and usually extremely crowded, the sweeping vistas of entire Kyoto as well as the lush green (or colorful in Fall) forest seen from its wooden stage will take your breath away. 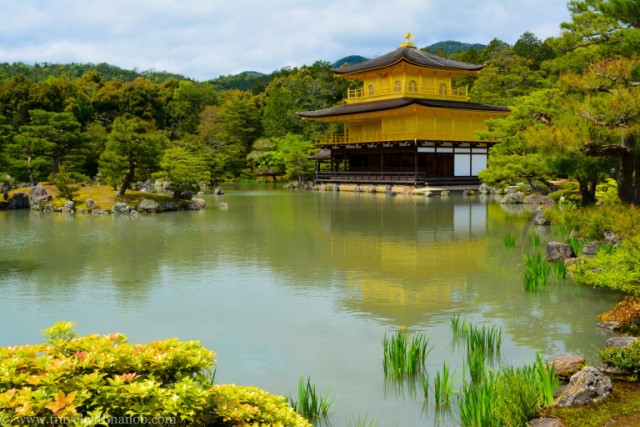 No visit to Kyoto is complete without visiting this jewel-like Zen- Buddhist temple which sits in the middle of the pond, totally untouchable, and taunting thousands of visitors with its beauty from afar. The Golden Pavilion gets its name from the gold leaf which covers the entire exterior of the building. The current structure dates back to 1955 when it was rebuilt and restored to a close approximation of the original building. 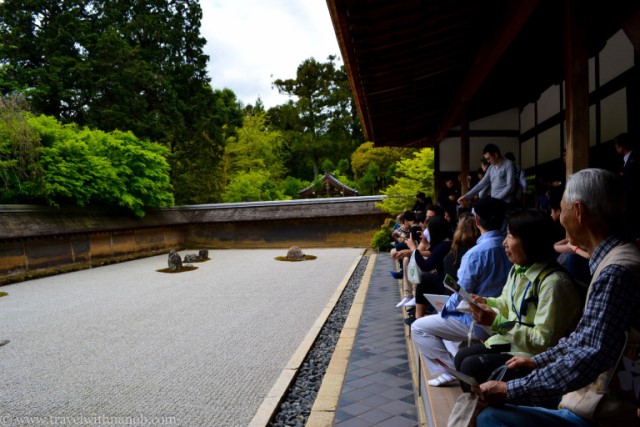 The rock garden is probably one of the most quintessential images of Japan, a sight for meditative contemplation or a riddle to train the mind. In the Buddhist philosophy, number 15 signifies completion and the message conveyed by the garden is that completion is not possible in this world. The garden is also an epitome of Japanese wabi-sabi aesthetics, which finds beauty in transience and imperfection.  The clay wall, which is stained by age with subtle brown and orange tones, reflects “wabi” and the rock garden “sabi”. Although don’t expect to find solitude and tranquility in this garden as it is flooded with tourists, just like Ginkaku-ji. 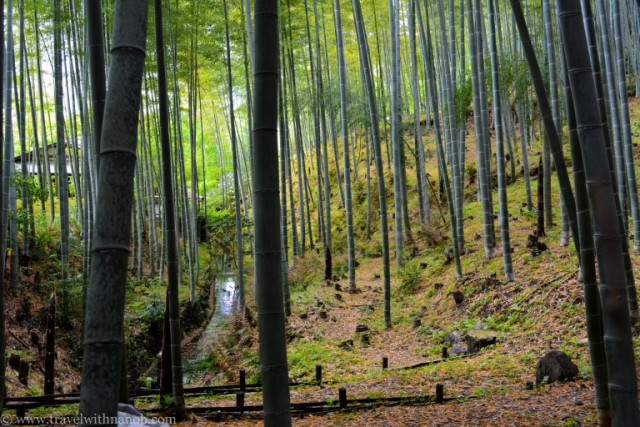 If you have time make sue to visit the thick emerald bamboo grove which is magical, mysterious, inspiring and peaceful at the same time. The soaring trees fill the space with an eerie green glow, and each stalk in the forest is its own hue. The light is flowing through the thick leaves while birds sing along the sounds of the wind blowing through the trees, leaves rustling and stems knocking against one another. A feeling of composure and tranquility takes over as you walk among the rows and rows of ringed, smooth stems.

From the world of emerald to the world of bright orange. Hundreds of vermilion torii gates form a tunnel which winds through a lush forest, the wooden posts are artfully adorned with kanji characters, the mini carpets of moss grow at the base of everything, centuries-old lanterns dangle along the way, the bright orange of torii contrasts with rich green of the forest, the intricately woven spider webs catch the sunbeams, statues of sly-looking foxes (kitsune) stand on guard and ward off evil spirits… atmosphere is tranquil and totally enchanting. Fushimi Inari Taisha or Shrine is the shrine dedicated to Inari, the Shinto god of rice, sake and business prosperity.

Each gate has been donated by a company or organization giving thanks for their prosperity and in hope of good fortune in the future. It is definitely a place not to be missed when visiting Kyoto. 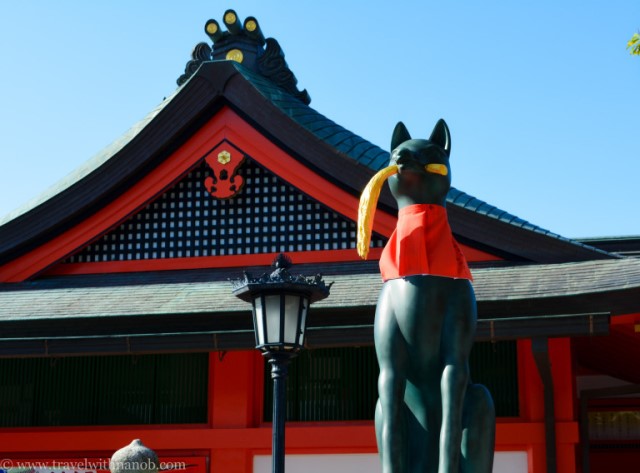 From the world of emerald to the world of bright orange. Hundreds of vermilion torii gates form a tunnel which winds through a lush forest, the wooden posts are artfully adorned with kanji characters, the mini carpets of moss grow at the base of everything, centuries-old lanterns dangle along the way, the bright orange of torii contrasts with rich green of the forest, the intricately woven spider webs catch the sunbeams, statues of sly-looking foxes (kitsune) stand on guard and ward off evil spirits… atmosphere is tranquil and totally enchanting. Fushimi Inari Taisha or Shrine is the shrine dedicated to Inari, the Shinto god of rice, sake and business prosperity. Each gate has been donated by a company or organization giving thanks for their prosperity and in hope of good fortune in the future. It is definitely a place not to be missed when visiting Kyoto. 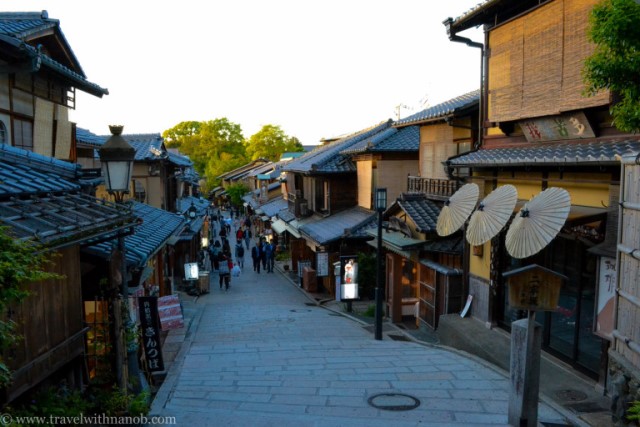 The neighborhood that oozes quintessential Japanese charm and age old traditions. It’s enchanting. It’s mysterious. It’s intriguing and evocative. Gion originated in the Middle Ages to provide accommodation for pilgrims to Yasaka Shrine, gradually evolving as the most exclusive and well-known entertainment neighborhoods in Japan. Most often referred to as Kyoto’s Geisha District, Gion lies north to south of Shijo Street and stretches from Kamo River in the west all the way to Yasaka Shrine in the east. Beautifully preserved wooden ochaya, or teahouses, where geisha entertain affluent clientele, line up along the narrow winding streets which have retained much of its original character. I loved meandering through the picturesque maze of cobbled alleyways which looked more like a movie set of an Edo period, filling me with the sense of suspended time. If you are lucky, you might even bump into a maiko or geisha. 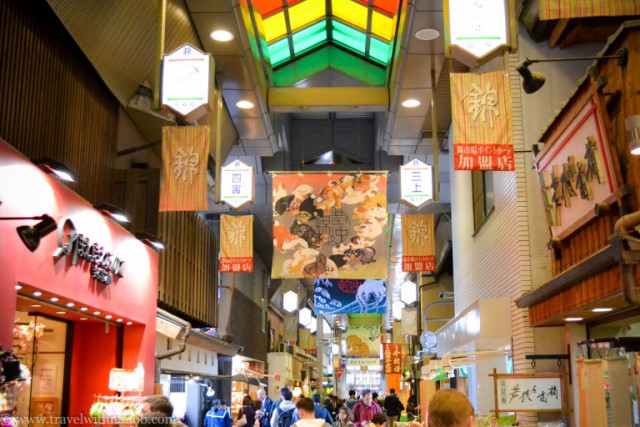 I loved exploring Kyoto’s curiosities and quirks and one of the best places to do so was certainly centuries-old Nishiki Market, city’s largest traditional food market commonly referred to as Kyoto’s Kitchen. Meandering through its tiny shops is definitely a pleasant sensory overload. Imagine row after row of the freshest Japanese produce, seafood, meats, dried, bulk, and prepared foods you can find. Most importantly, it is a wonderful place to pick up beautiful crafts and other souvenirs for yourself and your loved ones. 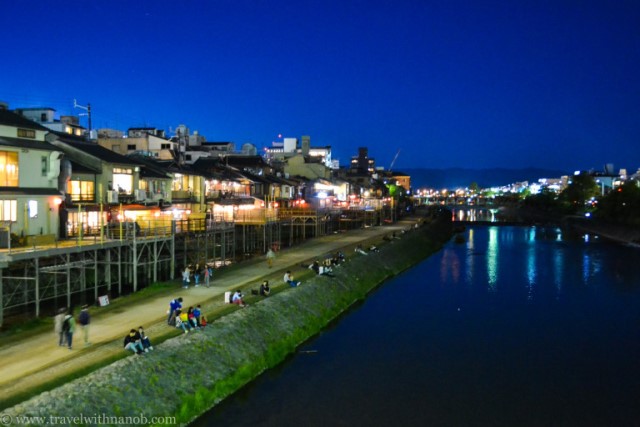 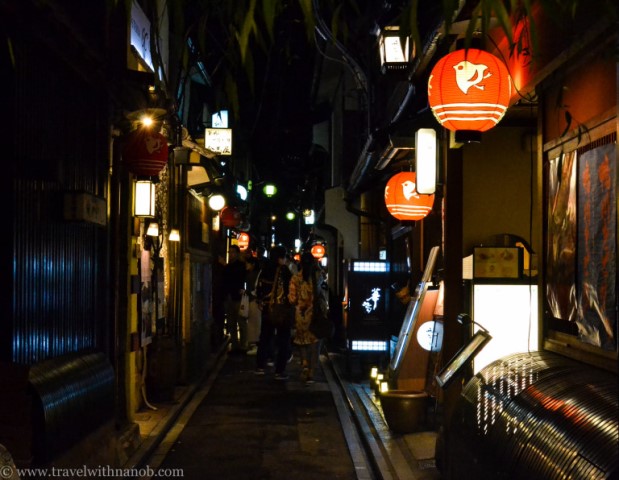 I found these two spots, running parallel to each other to be extraordinarily atmospheric and ideal for either a midday snack or nighttime dinner and drinks. The Pontocho Alley as well as the canal are lined up with dozens of enticing cafes and restaurants, some of which have balconies overlooking the water. I could only imagine (it was mainly chilly and raining during our visit) how relaxing it would be to sit on one of these lantern-lit terraces at the end of the adventure-filled day, gazing at the stars and soaking up the buzzing atmosphere of nighttime Kyoto.

VIDEO| Soaking in the culture in Japan's charming city of Kamakura