Foods like omurice, ton katsu and naporitan spaghetti are items you’ve likely seen on a menu if you’ve ever visited a casual dining restaurant in Japan. 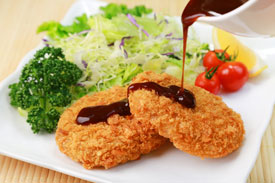 Called “yoshoku” (literally Western dish), these familiar looking dishes are imported and have a Japanese twist to them. While authentic foreign dishes have country names such as French, Italian and German, and are enjoyed at specialty restaurants (often more expensive), yoshoku can be enjoyed at causal family restaurants, usually at a much cheaper price.

The history of yoshoku dates back about 160 years when Japan eliminated its seclusion policy and opened its doors to the world and the various Western foods and cultures.

Japanese have often localized foreign culture by mixing it with their own and yoshoku is a good example, according to Naoko Ishikawa, a Japanese food culture expert. Japanese took the imported Western foods and swapped the expensive ingredients for cheaper local ones. The fusion dishes were established by the early 19th century and some popular dishes were widely served at various café and restaurants in the 1910-20s.

Some yoshoku dishes can go back to even earlier days, sometime in the 16th century when Spanish and Portuguese merchants and priests visited Japan for the first time. Tempura and kasutera cake are some examples, and are still popular among Japanese.

Today, you can sample most yoshoku dishes at casual or specialized restaurants, called yoshokuya (eatery for Western dishes) throughout the nation. Among the countless yoshokuya restaurants, Taimeiken and Shiseido Parlor in Tokyo are known for their original takes on omurice, katsu sand (pork cutlet sandwich) and other yoshoku dishes.

Omurice (fried rice in an omelet), ton katsu (deep-fried breaded cutlet of pork) and naporitan spaghetti (ketchup pasta stir-fried with onion, green pepper and ham) are some of the popular fusion dishes originally from the West and have somewhat adjusted to Japanese taste.

Pizza is another common yoshoku in Japan. Everyone has had pizza in the U.S., but here, it often comes topped with mayonnaise and corn. Not your idea of a good pizza topping? Don’t for get to tell the server to “Hold the mayo!”

Some yoshoku have become so localized that they are assumed to just be Japanese food.

Many of these foods are important home dishes, as well. In fact, my wife cooks some yoshoku dishes, such as rolled cabbage, minced cutlet and omurice with recipes passed down from my mother. We often season these dishes with soy sauce, Worcestershire sauce, tomato ketchup or demi-glace sauce and enjoy them along with rice and miso soup, using chopsticks, just like other traditional dishes.

The next time you get a chance to try a new yoshoku dish, give it a shot and see how your favorites from home have evolved in Japan. 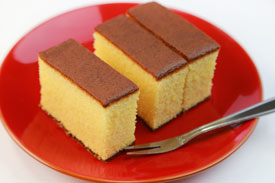 “Kasutera is one of very popular sweets in Japan and it really resembles Western sponge cake, but it is different,” said Traditional Japanese Sweets Association’s Mitsuo Yabu.  “While Western sponge cakes are made with baking powder, our ancestors made it by whisking eggs so that bubbles would make holes in the cake when baked.”

“Different from kasutera, chiirunko is a steaming sponge cake with plenty of eggs,” said Masae Arakaki of Okinawa’s traditional Ryukyu sweets shop, Arakaki Kashiten. “Like kasutera, we don’t use baking powder in chiirunko.”

Naporitan spaghetti has been one of the most popular yoshoku dishes among children for more than half of a century. I can remember as a kid, nagging my mother to cook it. It is an indispensable dish for kids, and any yoshokuya restaurant has it.

The spaghetti is just a ketchup pasta stir-fried with onion, green pepper and ham.

Despite the name, you will never find it in Naples, Italy, as it originated here in Japan.

With the end of war, and a food shortage in the postwar chaos, a Japanese cook at the hotel made the pasta by substituting pomodore sauce with ketchup, onion, green pepper and ham. There was plenty of ketchup available because of the American forces in Japan.

The greasy, sweet and sour taste of the pasta, called “naporitan spaghetti,” became very popular among locals and soon spread throughout the nation.

Naples pasta in Japan with the taste of America! 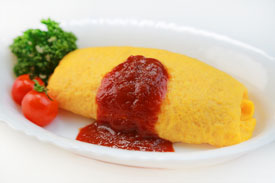 My favorite homemade yoshoku dish my wife makes is her omurice. It is known as one of the most popular yoshoku dishes and is fairly easy to cook. Besides of that, it is very tasty!  Try this recipe yourself and enjoy the yoshoku dish at home.

VIDEO| Taste of Japan: A look inside a sushi restaurant

Taste of Japan: 31 amazing dishes you didn't know about