Ken Watanabe may be the most famous Japanese actor in Hollywood these days, but “nabe” (hot pot) is one of Japan’s most popular wintertime dishes.

Imagine savory steam wafting from a broth laden with tasty seasonal vegetables and other ingredients as you lift the lid from an earthen pot atop the dinner table. It’s time to share the warmth of this cozy pastime with friends and family. It’s a nabe time. 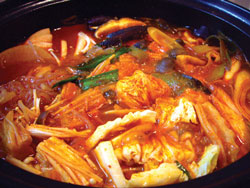 Nabe is the perfect dish to warm you up when it’s cold. It is a quick and easy one-pot hot meal. A wide range of ingredients can be used in nabe. It is usually with one main ingredient, meat or seafood, boiled together with seasonal vegetables and tofu in a single pot. The ingredients are cut into bite-size pieces for cooking.

Japanese use a “donabe,” or earthen pot, made especially for cooking nabe. A portable burner is placed in the center of table; the donabe is placed on it; and family or friends gather around for the humble feast.

The server is called “nabe-bugyo” or nabe master, based on the official positions of authority that were outlined during the Edo Period (1603-1867). The work of nabe-bugyo is to add new ingredients as the pot empties and control the cooking and taste of the nabe.

The most common type of nabe is “mizutaki.” Mizutaki is a very simple nabe in which ingredients (mainly seasonal vegetables and chicken) are stewed in unseasoned water. It is then eaten with a dip called “ponzu” sauce, a citrus-seasoned soy sauce. However, evolving nabe trends have led Japanese people into a wider variety in recent years.

Many different versions of nabe such as kimchi nabe, curry nabe, soymilk nabe, dumpling nabe, giblet nabe and ramen nabe can be seen on dining tables in homes these days. You can purchase variety of nabe soups at Japanese grocery stores this time of the year, which make it very easy to cook – and try different flavors. 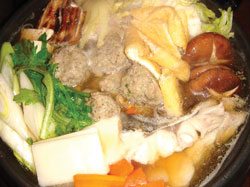 It is important to choose wisely what kind of vegetables you put into nabe. Although we can buy almost any vegetable year around today, the main vegetables for nabe are daikon radish, hakusai (Chinese cabbage) and shiitake mushrooms, which are in season in the wintertime. It is best to eat them when they are in season. The same goes for fish. We usually use seasonal white fish like cod. If you use meat, chicken or sliced pork are popular for nabe.

Also, there are local specialty nabes from different regions. For example, Hokkaido nabe is usually stewed in a miso-based soup. Hakata is famous for its mizutaki nabe made with high-quality chicken grown locally in Fukuoka. Akita Prefecture is famous for nabe with rice cakes called “kiritampo.” 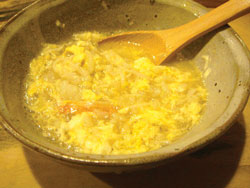 Most importantly, you have to remember that the best part of nabe comes at the end. To wrap up the nabe experience, many people enjoy “shime,” or meal-ending customs. Rice or udon noodles are added to soak up the remaining soup stock and then eaten. It has very rich taste full of all the flavors that went into the nabe.  It is a bit like risotto. Some people even use pasta and add cheese for shime. You can use use your imagination to make your own shime.

Nabe not only warms you up in the winter, it is also a way to have social gathering in Japan. Japanese love to have Nabe parties with friends and family at home. We enjoy sharing food and conversation over a single pot; we believe it strengthens relationships.

So have some nabe and warm your body and heart with this winter tradition in Japan. 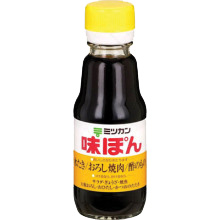 This citrus-based sauce is made with rice wine, rice vinegar, “bonito” fish flakes and seaweed. After the liquid is cooled and strained, it is infused with a citrus fruit called “yuzu.” Other Japanese citrus fruits such as “sudachi,” “daidai,” and “kabosu” are also used. If you like cooking Japanese food, you must have this.

Yuzukosho
This is a Japanese citrus-chili paste made of yuzu peel, spicy chiles and salt. It is useful when you want to add extra spice and citrus aroma. It goes very well with nabe. Definitely worth trying it.

You can buy both of these condiments at Japanese supermarkets.

Japanese Nabemono dishes: Drop it like it's hot pot

Japanese savor the cold months with these 8 winter comfort foods