Now that we’ve taken care of the happiness portion of the New Year food courses with burdock, it’s time to summon money with kumquats!

In Japan, this tiny citrus fruit is called kinkan and forms part of the Osechi Ryori because the name in kanji is either “金柑” or “金冠”, which means “gold tangerine” and “gold crown” respectively. In China, where the fruit originated, its name is “金桔 (jīn jié)”, meaning “wealth” and “good luck”, according to the Japan Weather Association.

Besides the prospect of more wealth, kumquats are delicious and delicately sweet! They can be eaten raw but for the New Year, we have it in kanroni, which stews kumquat with sugar and mirin sweet cooking rice wine. The cooking process brings up a distinct sweetness and fruitiness with a marmalade-like consistency.

Commonly called kinkan-no-kanroni, stewed kinkan is a regular menu item for the New Year’s meal. Try the recipe below, adapted from the Japanese Consumers’ Co-operative Union. With just a few simple steps to follow, this would arguably be one of the easiest Japanese New Year foods that you can make on your own.

The only daunting part of the entire recipe is removing the seeds. However, for 30 pieces of kinkan, I was able to complete this task in 10 minutes by making small slits on the delicate skin and using a toothpick to pry out the seeds with a little patience.

From start to finish, it took me about 90 minutes. Though it is a bit longer than I usually spend on cooking, the end result was totally worth it. The heavenly scent of the kinkan, sugar and mirin will entice you to give it a little taste, but just be careful not to burn yourself.

Another good pointer to know is that this can be cooked in a big batch and stored much like you would marmalade or jelly. Refrigerated in a jar or airtight container, the kanroni will last about six months to a year.

So, add this sweet dish to your New Year’s lineup and see if it brings you good luck and wealth in 2022! 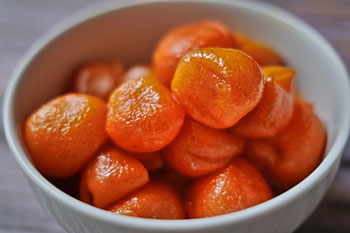 kinkan-no-Kanroni (stewed kumquat)
*For a family of four, this recipe should be enough for a few servings per person.

Recipe
1. Rinse and wash off kinkan with water. 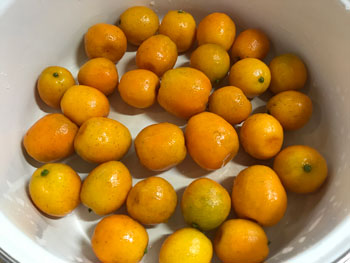 2. Put kinkan in a deep pot with water and place over high heat. (Make sure there’s enough water to cover the kinkan. Stop heating just before the water is boiled.) 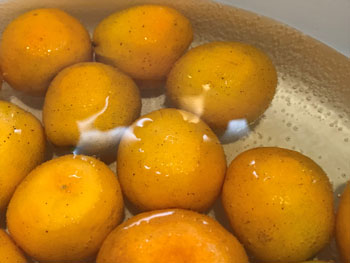 3. Drain water and take kinkan out of the pan. Let them cool.
4. Once cool enough to hold, remove the seeds. Do this by making about six vertical slits on each kinkan with a kitchen knife and using a toothpick to bring the seeds up and out. Be sure to remove stem ends as well. 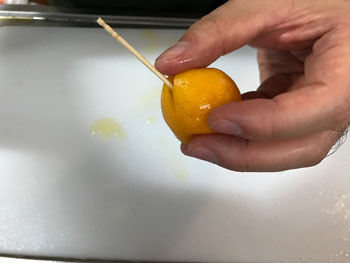 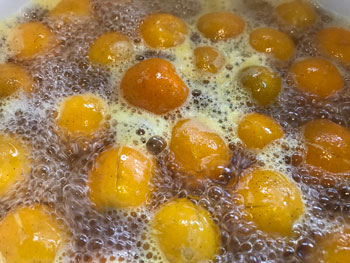 6. Add kinkan to the mixture and slowly heat it on a medium heat, until the tangerine starts to glisten and soften. 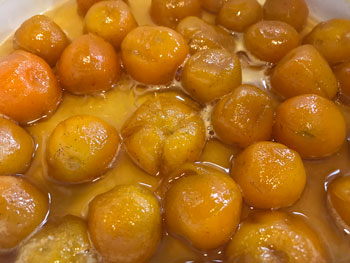 7. Serve on small plates cold (you can also enjoy this dish warm if you let it cool a little after cooking). Bon appetite and good luck in the New Year! 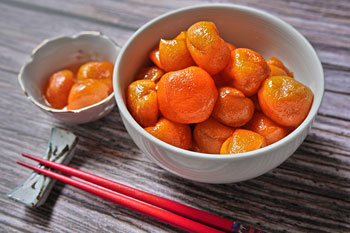 Have a happy (and sticky) new year with Okinawan Muchi

How to bake cassava cake like they do on Guam