Toshikoshi soba (year-crossing soba noodles) is a traditional food that many Japanese eat every year on December 31. Eating soba noodles to mark the end of the year is a custom believed to have been established around the Edo Period (1603 – 1868).

There are many theories surrounding how or why the noodles became a part of the year-end ritual. According to the Nihon Menruigyo Dantai Rengokai, an association of noodle makers in Japan, the most common theory involves the belief that the thin and long shape of soba noodles represents the hope for longevity and good luck.

Other theories include the breaking of bad cycles of struggle, misfortune, and debt because soba noodles are easy to cut. Or, another is that the noodles could bring in gold since in the old days craftsmen utilized buckwheat flour, the main ingredient of soba noodles, to gather scattered gold foil.

No matter what kind of luck it brings or which of the theories you subscribe to, soba noodles are a quintessential portion of the New Year celebrations in Japan and well worth a try.

If you live in mainland Japan, you will not have trouble finding a good soba restaurant. For those who live in Okinawa, however, it will be a different story.

On the subtropical island, Okinawa soba noodles, made from flour not buckwheat, are what you’ll find at local restaurants. Although there are some eateries dedicated to the Japanese-style buckwheat soba noodles, finding those spots is a bit of a challenge. But many family restaurants on Okinawa have Japanese-style soba on their menu, so check those out. Or, better yet, you can cook your own at home!

Try this simple recipe and have fun choosing the toppings to make it your own. This was my first time trying to cook Japanese-style soba noodles, but it turned out great. The soy-sauce based broth and the smooth texture of the noodles went well together. The shrimp tempura and shichimi togarashi (seven-spice chili pepper) I used as toppings added a nice punch of flavor.

My soba noodles and broth were so good, I am now wondering whether I should go with Japanese-style or my usual Okinawa-style soba noodles for Dec. 31. This will be a difficult choice, but either way, I am on track for eating a lot of soba noodles to bring luck for 2022.

1. Peel the shell off shrimp except for the closest portion to the tail. Devein the shrimp. Slit the tip of the tail diagonally and squeeze out water.

2. Slit the stomach of the shrimp a few times and bend backward and straighten them by stretching the slitted portion. Wipe water off the shrimp and sprinkle salt and flour on them.

Step 1. Mix beaten egg and cold water in a bowl. Add flour and mix them together to prepare tempura batter.

Step 2. Heat salad oil in a pan to 160 ℃（３２０℉). Holding the shrimp’s tail, dip into the batter, then transfer to heated oil. (Make sure its tail is not soaked in the batter.)

Step 3. Sprinkle additional batter on top of the shrimp and fry for about 3 minutes. Take it out and drain excess oil.

Step 5. In a separate pot, bring water to a boil. Add the soba noodles and let it simmer until the noodles are cooked through (about 1-2 minutes for raw noodles, and

3-4 minutes for dried noodles/see note below). Then, turn off the heat and strain out the water.

Step 6. Portion out your noodles into a bowl and pour the broth over.

Step 7. Top with shrimp tempura and other toppings to your preference.

*For convenience, I utilized preprocessed shrimp and skipped preparations 1 and 2.

* Regarding step 5, boiling time depends on how soft or hard you want your soba noodles to be. The longer you boil the noodles, the softer they become just like pasta. I boiled the

noodles for 5 to 7 minutes.

*Recipe adapted from Ajinomoto, a major food company in Japan. 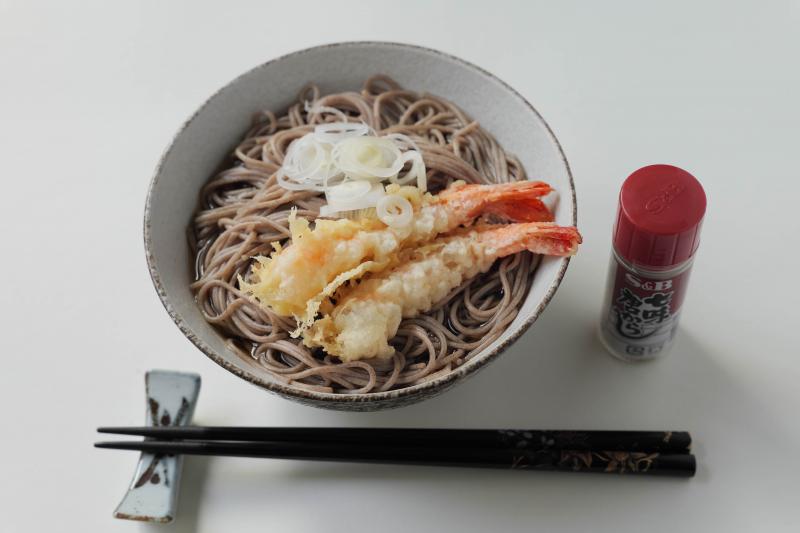 Taste of Okinawa: Have a happy (and sticky) new year with Muchi