If you have sampled the traditional sweets of Japan, you might have been surprised how different the tastes – and ingredients that include sweet potatoes, sweet beans and rice - are from Western sweets.

These sweets are not only savory, but generally extremely fancy and beautiful. They usually are served with tea and are used for temple ceremonies, offerings and gifts. They also have a deeper meaning to the Japanese.

The traditional sweets supply nourishment to the heart, according to Mitsuo Yabu, managing director of Traditional Japanese Sweets Association.

“As you know, food is necessary for a man to live, but sweets are not,” he said. “But they enrich and encourage our heart with their delicious tastes and elegant looks. I think this is very important.”

“I would like as many people as possible to be touched by these souls by enjoying these traditional sweets.”

Okinawa has its own group of traditional sweets called Ryukyukashi, developed under the influence of both Japanese and Chinese during the Ryukyu Dynasty (1372-1879). “Ryukyukashi is the fruit of a Ryukyu Dynasty aesthetic sense,” Arakaki said. “It is said that Ryukyu-kashi is 30 percent Japanese taste and 70 percent Chinese.”

According to Arakaki, existing documents from that era show there were more than 230 recipes of sweets during the Ryukyu Dynasty, although most have been lost. The Ryukyukashi available today are mostly baked sweets, which include the famous Okinawan Cookie, “chinsuko,” and “hanabo-ru,” cookies shaped like Wisteria flowers.

While Okinawan sweets are hundreds of years old, the first form of Japanese sweets, wagashi, was developed about 5,000 years during the Jomon Period. During this time, people started making food out of nuts, according to Yabu.  “Smashing oak nuts into powder to make “dango” (dumplings) after removing the bitterness with water are fundamental processes for making wagashi,” Yabu said.

Another important part of wagashi is mochi, a chewy rice cake. As rice can spoiled easily, ancient people invented a way of preserving it by making mochi.

“Rice cakes can be preserved for a long time without refrigeration,” Yabu said. “And once you cook it over a fire, it becomes very tasty.”

These two ancient sweets, dango and mochi, are mainstream wagashi today, with many popular shops specializing in them.

“As wagashi is made mainly from cereals, rice flour, nuts, beans and potatoes, the smell is very faint,” Yabu said. “Japanese traditionally prefer a faint smell for sweets.”

And until about 50 years ago, wagashi did not include dairy products nor eggs. However, today “most wagashi shops use these animal products for some of their sweets,” he said.

The biggest difference between wagashi and Ryukyukashi is oil. While wagashi almost contain no oil, Okinawans use a lot of oil in their sweets.

“A majority of traditional Okinawan sweets use lard for baking and for flavor,” Arakaki said. “Chinsuko, for example, is a cookie using lard instead of butter, and that gives it a unique flavor.”

On the contrary, the use of oil is traditionally avoided when making wagashi, according to Yabu. “Adzuki beans are used quite often to make bean paste in wagashi, but soybeans have never been used because of the lipid,” he said. “An adzuki bean is only 2 percent fat while the soybean has 20 percent. The (vegetable) fat makes bean paste sticky and spoils the flavor, which is why our ancestors avoided it.”

Climate also plays a part in differentiating the two traditional sweets. In mainland Japan, the sweets are seasonal.

“We know spring has come when kusamochi (rice-flour cake flavored with mugwort) is available in February,” Yabu said, adding that the shapes and colors of the sweets also vary from month to month. “Summer is heralded by mizuyokan (soft adzuki-bean jelly) and kuzuzakura (cherry-leaf-covered kuzu bun filled with bean jam), and for autumn, there are persimmon and chestnut sweets.”

Since there are not four clear seasons on Okinawa, the same sweets are sold throughout the year. “But we often shape our sweets in accordance with the season,” Arakaki said. “We shape chinsuko in a cherry-like figure in spring, and star-like for summertime.”

So, exactly how popular are these traditional sweets?

When the Ministry of Agriculture, Forestry and Fisheries conducted a nation-wide survey on Japanese sweets in 1978, Yabu said the data clearly showed a majority of younger people didn’t eat the traditional sweets, while those age 70 and older did. The data made those in the traditional sweets industry worry that their products would fade into history.

“However, when the ministry did the same research 28 years later, the data was still the same,” Yabu said. “The data clearly shows that people enjoy the traditional sweets as they grow older, which made us very relieved.”

Wagashi Trivia – Do you take off the leaf?

When you eat “sakuramochi” or “kashiwamochi” sweets, do you remove the leaf wrapping, or eat it with the leaf?

According to Mitsuo Yabu, managing director of Traditional Japanese Sweets Association, a famed television announcer once told viewers that a true connoisseur of traditional Japanese sweets should eat them with leaves on, and many believed what he said.

“That is absolutely wrong,” said a notably perturbed Yabu. “It took me a long time to correct the public’s misunderstanding.”

According to Yabu, to fully enjoy these rice cakes, you should enjoy the faint aroma of cherry or oak leaves first, then remove the leaves just before eating it.

“The salty taste of the leaves remain on the rice cakes, making the sweets even sweeter with a delicate flavor.

Dango - A sweet dumpling that comes in an assortment of colors and is made from cereals and rice.  Soy sauce and sweet bean paste are often used to flavor it.  Applying sugar to a well-pounded dango can preserve it for long time.

Monaka - A wafer filled with adzuki bean paste. The paste can be made from sesame seed, chestnuts or rice. Most wafers are sqaure shaped in a square. Monaka is usually served with tea.

Senbei - A Japanese rice cracker in various shapes, sizes and flavors that are usually baked or grilled, traditionally over charcoal. A typical senbei is flavored with soy sauce and mirin, and wrapped with a layer of seaweed.  There also are salt- and sugar-flavored senbei.

Chinsuko - An Okinawan cookie that originated during the Ryukyu Dynasty. It is made from wheat flour, sugar, and lard. It is baked until an appealing exudes. Chinsuko is one of the most important traditional sweets on Okinawa.

ChiIrunko - Often called “Okinawan kasutera,” Chirunko is a brightly colored steamed cake topped with a smattering of peanuts that have been dyed red with citrus peels boiled in sugar syrup. The recipe includes plenty of eggs, which were scarce and thus highly prized during the Ryukyu Dyanasty era.  It is said that this cake was eaten only by nobility.

Senjuko - A pretty lotus-shaped cake with pastry on the outside filled with a mixture of sesame and peanut butter and refreshingly fragrant kippan.

Hanabo-ru – A cookie made from wheat flour and egg yolk and shaped like a Wisteria flower. This Ryukyu-kashi requires the skilled techniques of an experienced patisserie chef. The Portuguese introduced this sweet to mainland Japan in the 1600s, and later it was introduced to Okinawa.  Today this sweet is enjoyed only on Okinawa.

“Kasutera is one of very popular sweets in Japan and it really resembles Western sponge cake,” said Traditional Japanese Sweets Association’s Mitsuo Yabu.  “But it is different.  While Western sponge are made with baking powder, our ancestors made it by whisking eggs so that bubbles would make holes in the cake when baked.”

“Different from Kasutera, chiirunko is a steaming sponge cake with plenty of eggs,” said Masae Arakaki of Okinawa’s traditional Ryukyu sweets shop, Arakaki Kashiten. “Like kasutera, we don’t use baking powder in chiirunko.”

Make it yourself
The following recipes of popular sweets enjoyed in mainland Japan and Okinawa. 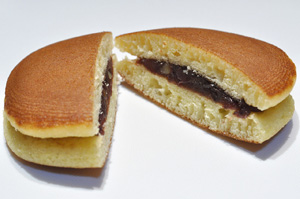 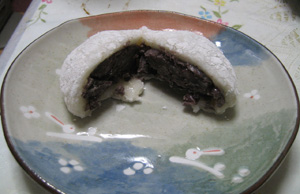