While it started out hundreds of years ago as a way to preserve fish, in its current form, sushi is now commonplace in many countries. As most visitors to Japan nevertheless want to sample the different fish found here, we've compiled a list of the 28 most common (and must-try!) sushi types you can find in Japan!

These days, sushi comes in many forms, from conical temaki rolls to cylindrical makizushi rolls. Some styles will even feature fish on the outside of a roll.

One of the more popular sushi forms found in Japan is the nigiri, which is a simple pressed rectangle of rice (shari) topped with a piece of fish or other ingredient (neta). This style of sushi can be found practically everywhere in Japan, from humble convenience store bento boxes to upscale sushi restaurants. 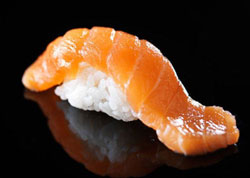 Meaning "melt" in Japanese, the toro cut of a fish refers to the soft, fatty belly section and tends to be prized in sushi restaurants everywhere.

Fatty and rich in flavor, served raw or slightly grilled, this cut of salmon has an extremely tender texture. 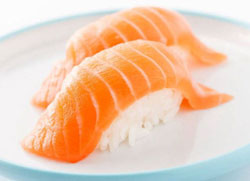 Although it didn’t start out as a traditional sushi topping, salmon is currently one of the most popular options. Even if you aren't ordinarily a lover of fish, salmon is a perfect beginner step. It's loved for its mild, creamy flavor, medium-body softness, and the perfect harmony of flavor it has with the flavor of rice, soy sauce and wasabi. 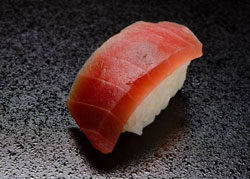 Tuna - and bluefin in particular - are a rather large type of fish, growing up to 3 meters (just over 9 feet). As a result, the texture and flavor varies greatly depending on where on the body the cut of fish is taken from.

Deep reddish-purple in color, the akami cut is quite lean, leading to a clean and slightly meaty flavor. Akami usually comes plain, but is also often served zuke-maguro style, where is it pickled in soy sauce or a mixture of condiments. 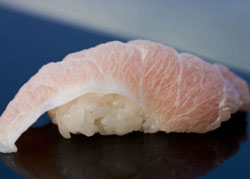 Taken from the tuna’s belly area toward the center and rear of the fish, this prized cut is a mixture of akami and the rich, fatty o-toro. It is soft and rich due to the high fat content. 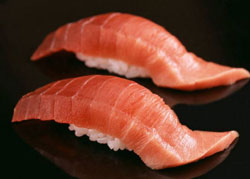 O-toro is taken from the front of the belly, the extra-fatty part of the tuna, and has marbled appearance. It is perhaps one of the most highly prized cuts. The buttery flavor and delicate texture makes it a popular nigiri topping.

Although often served as-is, it can also be served aburi-style, where a short burst from a blowtorch gives it a slightly smokey taste and extra meatiness. 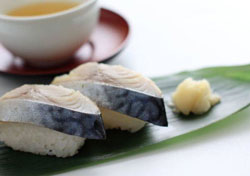 Saba is one of the most commonly eaten fish in Japan, as it is abundant, cheap and has high levels of omega 3 fatty acids. As it ages quickly after being caught, when used for sushi saba is pickled in a mixture of salt and vinegar to preserve it, while retaining a raw-like flavor. As a result its flavor can somewhat resemble a fresh ocean breeze. 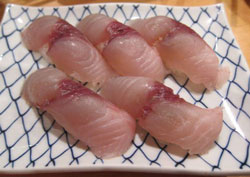 Regarded as the top-end of the mackerel available in Japan, sawara has a pinkish-white coloring and is opaque in appearance. It has a meaty but light flavor to it. While it typically arrives served plain, it can also be lightly grilled to enhance its succulence, or sprinkled with the smallest pinch of salt to balance its richness. 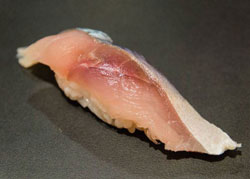 Whereas other varieties of mackerel tend to have a more distinct (and sometimes stronger) flavor to them, aji by comparison is fairly mild and even slightly sweet. It can be served raw or slightly cured in salt and vinegar. Often it will be served topped with ginger and negi, or a drop of citrus juice. 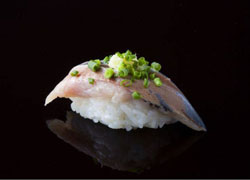 Sardines tend to have a reputation for being more of a saltier, pungent fish, though this impression often comes from the canned version. Served raw and very fresh, sardines can have a lightly sweet, oily flavor. They are considered quite healthy and delicious, and are often served with a dab of ginger and negi to balance their natural oiliness. 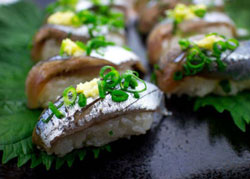 Certain fish are served seasonally, and sanma are an autumn specialty. They have a stronger oceany flavor and can be eaten raw or aburi-style, with the oils in the meat making it extra succulent when braised. 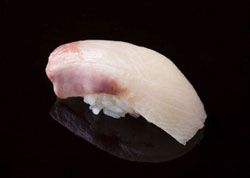 As with different meats (lamb vs. mutton), some types of fish are known by a different word to differentiate age. When a yellowtail reaches mid-maturity, it is called kampachi. They are caught along the coast of Central and South Honshu, coming into season from early summer to autumn. When sliced for sushi, kampachi have an elegant cream color with a pink edge. The fish has a clean, mild and slightly sweet flavor, and is usually served as-is. 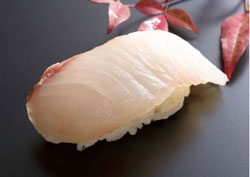 Adult versions of the yellowtail fish are known as buri, and along with kampachi it is regarded as a luxury fish. Buri has a dense, creamy flavor, and the peak time to eat it in season is from December to February, as it accumulates fat for the winter. 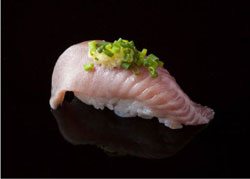 One of the earliest popular toppings for sushi, katsuo has been eaten this way since the Edo era. Generally regarded as a bold, meaty-tasting fish with dark red-purple colored flesh, katsuo has a leaner flavor when eaten during spring, while it is richer and fattier in winter. Often it is topped with negi and ginger to help balance out the deep flavors of the meat. Be sure to try it at least once. 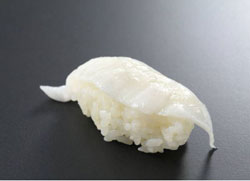 The frilly edge from a flounder's tail fin, engawa is a treat to eat. The meat is thin, with a soft and slightly chewy texture, and has a buttery flavor. Engawa may be served as-is or aburi-style, seasoned with a sprinkle of salt or splash of ponzu (citrus and soy sauce). 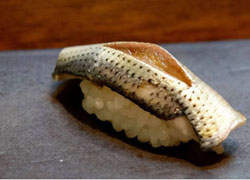 Together with iwashi, aji and sanma, kohada is another of the shiny silver sushi fish. Traditionally it is served with its dazzling silver skin on display atop the nigiri, with pieces either scored, layered or decoratively woven. With quite a bold taste indeed, kohada is often marinated first in vinegar and salt to balance out its flavor. 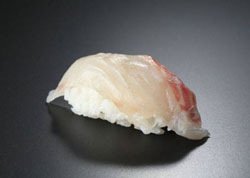 Tai is distinguishable by its near-translucent, pinkish-white flesh. It has a delicate, sweet taste; also it is fairly low in fat and high in vitamin B. 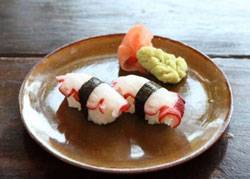 Since raw octopus can be surprisingly bland compared to other seafood, often it will be first blanched (quickly plunged in boiling water, then dipped in ice water) when used as a topping. This process draws out the mild sweetness of the tako while imparting a slightly chewy texture. 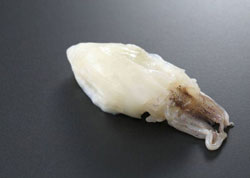 A section of cuttlefish legs, geso are served decoratively draped over the shari sushi rice. They have a delicate flavor, slightly chewy texture. Generally they come raw but are also served grilled and splashed with a little citrus or ponzu dressing. 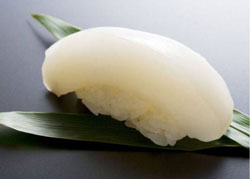 Now while there are several types of squid in Japan, one of the most popular is surume ika. This is nearly always served on top of rice, scored lengthways, crossways or cross-hatched. Sometimes a shiso leaf will be placed between the ika and rice, as its aromatic flavor goes well with the soft, sweet squid. 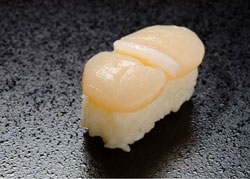 Scallops are a common favorite sushi topping. They have an extremely smooth, glossy flesh with a gentle and slightly sweet flavor. To prepare scallops for nigiri, the round flesh is sliced across the center to butterfly it, then pressed onto the shari. The sweetness of the scallop works well with a little citrus. 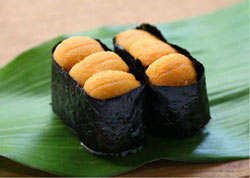 Regarded as one of Japan’s three major delicacies, uni is prized for its buttery, oceanic flavor and creamy texture. Generally uni is bright orange in color. Uni nigiri may be topped with a dab of wasabi, as the bold sharpness compliments the rich sweetness of the meat. 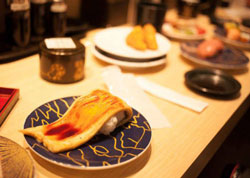 Unagi is prized for is bold, rich taste. Although it can be served raw, unagi is typically grilled and basted with a sweet soy-based tare sauce. 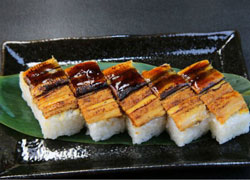 Anago is quite similar to unagi in flavor, however it has a softness and brightness to its taste. The texture is fluffy, and fillets are usually also brushed with tare sauce before serving. 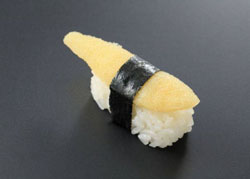 Kazunoko is herring roe that has been sun-dried or pickled in salt, a process which lends to its crunchy mouthfeel and sharp flavor. Often it is served fastened to the rice with a strip of nori. 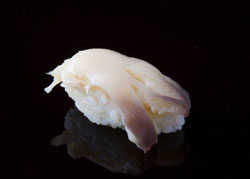 Hokkigai is very distinct and attractive in appearance, with a slightly rippled, fin-shaped form and pink color gradient. Its flavor is elegant and mild with a slight chewiness, making it a nigiri favorite. 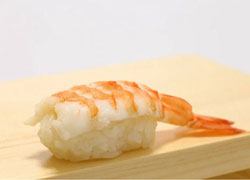 One of the ubiquitous sushi toppings, ebi come in many different varieties. The most popular are the large, fleshy and striped kuruma-ebi; the small, sweet and translucent ama-ebi; and the plump and sought-after botan-ebi. These are usually served peeled, with the tail left on. 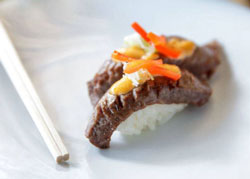 A non-traditional but nevertheless quite popular topping for nigiri: wagyu beef. Famous around the world for its fatty marbling, which imparts a rich, sweet and savory flavor, when wagyu is served as a sushi topping it may also come raw or aburi style. (Note that wagyu sushi is typically found more in beef restaurants as opposed to sushi restaurants.) 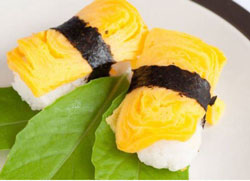 Often translated as "Japanese rolled omelettes" in English, it can be difficult for some to imagine egg atop rice! Made with eggs beaten together with dashi, soy sauce and mirin and then gently cooked as an omelette, their umami and mild sweetness make tamagoyaki a popular end to a fine sushi meal.

Why Japanese, foreigners crazy about curry

What did he say? 20 colorful, funny Japanes words that baffle foreigners

VIDEO: Eating in Japan: Quick look inside a sushi restaurant

SUSHIP: A floating world of fine dining in Japan