Whenever I get homesick or crave some comfort foods, there are a few dishes I turn to. But, usually I think about tacos.

No, I don’t think about chain store tacos, I think about the tacos I get at the street stalls in my parents’ hometown in Mexico, or the ones I could get from the truck outside of nearly every bar or grocery parking lot in the western Texas town where I grew up.

More specifically, I think about tacos al pastor, tacos made with tender pork seasoned in various spicy and sweet spices and slow-cooked on a rotating vertical spit and topped with roasted pineapple, cilantro, onions and guacamole.

This isn’t a typical dish cooked in the Mexican home, but it’s definitely a favorite at food stalls and restaurants in the States and in Mexico.

Living abroad and not one to easily forget a craving, I’ve definitely tried to replicate tacos al pastor at home, but to master this recipe it takes many ingredients not yet available in Japan and a lot of time. So, imagine my surprise when I heard a small California-based chain of taquerias (taco joint in Spanish) was bringing their al pastor and other tacos to Tokyo.

TacosWay opened not in some seedy parking lot or random street corner with access to the masses, but in the ultra-modern, ultra-sterilized environment better known as Mori Tower in Toranomon Hills, a place you’re more likely to find skyscrapers and salarymen in ties than tacos.

TacosWay is definitely a bright point in the building, which mildly represents a bizarro space station or staged Disneyland labyrinth for the line leading to a Star Wars ride. This is a good place to note that because of its location, it is easily accessible to the buildings’ and surrounding areas’ workers, so weekday lunchtime is probably best to avoid.

When I visited TacosWay on a weekday evening, I passed people heading home after a long day of work. Inside there were a few people having dinner, but my friend and I were seated at a comfortable distance from others in the dining area.

The menu consists of many taco options, including carne asada, beef tongue, grilled chicken and carnitas. They also offer salads and appetizers like carne asada fries and chips and guac. TacosWay’s locations in California are pretty popular on Instagram for offering an extensive list of crazy margaritas, which unfortunately seem to have been modified on the Tokyo drink menu. When you live in Japan long enough, you realize that Western chains cater their menus to the local taste, so I wasn’t surprised that TacosWay’s margaritas were probably too sweet or outlandish to have here. 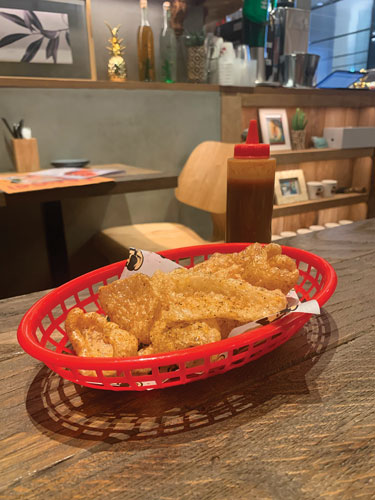 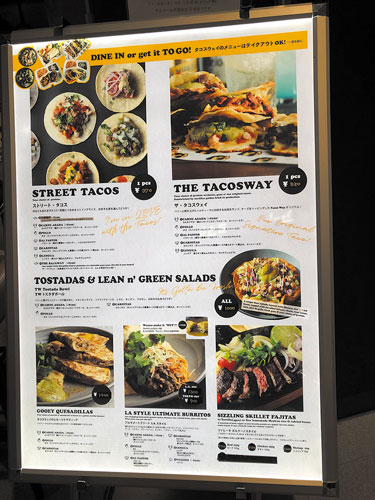 For drinks, we ordered the Venice Beach Margarita, one of a three cocktails (700 yen each or $6.30) named after the beaches of Los Angeles, the home of the TacosWay. The Venice Beach margarita is a mango, pineapple and passion fruit concoction with a Tajin chili powder rim and sour candy garnish.  The Hermosa Beach is a raspberry margarita, and the Malibu Beach is a non-alcoholic pina colada mocktail. We enjoyed the bright green margarita, and the Tajin chili powder was a nice touch that transported me home. 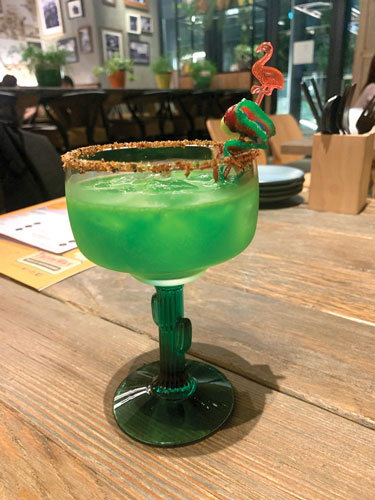 For my meal, I ordered two tacos al pastor, the TacosWay, which, according to their menu, means the meat, cheese and other toppings are sandwiched between two corn tortillas and fried “to perfection.” Diners can choose what meat they want, but a TacosWay-style taco is 580 yen or if you want the standard classic street taco, it will set you back 370 yen per taco. For an extra 350 yen, they add Mexican rice and refried beans. I’m not a fan of beans, so they were generous with the rice serving.

While I patiently waited for my Mexican comfort food, the server brought out fried and seasoned pork skins with a salsa squeeze bottle. These were part of the service for the night included in the table charge (300 yen per person). These pork skins were fried to perfection which made me more excited for the tacos that were on the way.

Soon, our food was out and though the servings did not seem gigantic, at the end of the meal, I was more than satisfied. I scooped up some rice first and it was delicious. TacosWay’s Mexican rice isn’t like my mom’s, but it’s closer than any I’ve had at Mexican eateries in Tokyo. My friend liked his beans well enough. But it didn’t matter, we were really here for the al pastor!

I picked up a crispy, greasy taco. It was like a fried corn tortilla quesadilla slightly larger than the palm of my hand. It was, as promised, fried to perfection and the flavor explosion from the well-seasoned and marinated pork melding with the onions and guacamole was mouth-watering. These were the best al pastor tacos compared to any of the other Mexican restaurants I’ve been to in Japan. I say this recognizing that one does not travel to Japan to have Mexican food, while admitting that I will spend exorbitant amounts of money at Mexican restaurants when I’m homesick.

Either way, I found the place worth visiting the next time the craving hits at TacosWay, smack dab in the middle of a concrete gray futuristic-looking business building. And, at just under 5,000 yen for two of us, it wasn’t a bad deal for four tacos, rice, beans and two cocktails. The menu has many options for different palettes, so bring your friends and family.

I know I’ll be back again and again for more al pastor and maybe to try the other types of tacos. But I can appreciate that TacosWay opened in Toranomon Hills and that office workers have the opportunity to sample and love the food I grew up with. 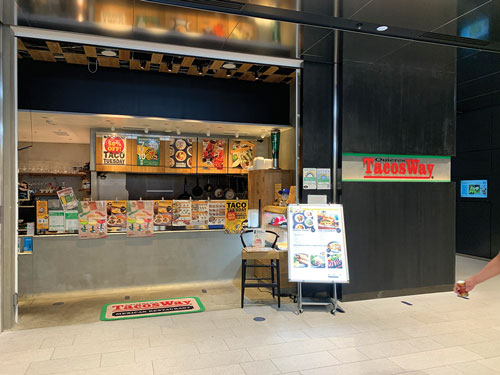 There's a fiesta on my taste buds