There are few things more refreshing than sipping a cold beer on a sandy beach in Kamakura or while enjoying the panoramic vista from an Enoshima restaurant. And the region’s local microbrews only help enhance the flavor and area’s beach resort atmosphere. 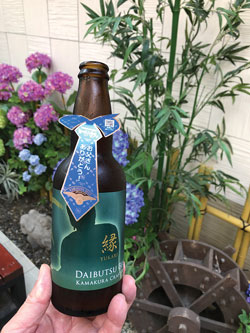 During our day in Enoshima and Kamakura, I had the opportunity to enjoy several of the local craft beers.

With our shirasu-don lunch, I sampled Enoshima Beer. The smooth, fruity flavor with silky-white fine foam paired well with the great view our table at the restaurant had. I was impressed with the beer’s well-balanced bitter and sweetness, while the smooth texture enhanced the tasty whitebait dish.

Daibutsu Beer, which I had at the Enoden Kamakura Station, was clear with a bright, straw-yellow hue, and had a prominent but not extreme hop aroma. Slightly more bitter than Enoshima Beer, its stronger, crisp aroma was refreshing.

Another beer I sampled was Kamakura Beer (Tsuki). At the end of a day full of sightseeing, this refreshing bottled beer tasted like it was just off the tap. I enjoyed this beer’s complicated taste of blended bitter and roasted malt flavors, and its aroma reminded me of sweet brown sugar.

Though these craft beers share similarities in brewing methods and balanced malt flavor and hop aromas, they are unique in their own right.

Kamakura Beer Brewery uses the top fermenting method, which applies relatively high temperature (between 59- and 68-degrees Fahrenheit) in the brewing process, making the yeast rise to the top. This method changes the flavor of the beer in comparison to major brand bottom-fermented pilsners. 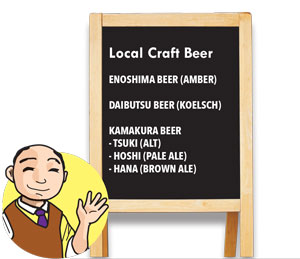 In addition, the brewery says they don’t filter the yeast out. Since the yeast in the bottle is still active, the flavor remains fresh and keeps the crisp hop aroma.

To maintain the high quality, Kamakura Beer Brewery produces only 4,500 bottles during a single brewing process, according to its website. Although these craft beers are not very cheap - around 500 yen (about $4.50) for a 300-milliliter bottle - they are really worth a try.

Sample some of the local craft beer when you visit Kamakura or Enoshima. The local brews are another way to taste the flavors of the region.

Enoshima and Kamakura beer can be purchased at souvenir shops, convenience stores and restaurants in the area.