Living in Japan, I miss a few things every winter from my hometown in Texas. Tamales are one of them.

For those not familiar, tamales could be described kind of like meat or vegetable pies made of cornmeal-and-lard-based masa, or dough, wrapped in dried corn husks. Using “meat pie” is probably a description that might make tamale-purists scowl, but the English language fails to do the poetic justice only my Spanish words could do for this taste of heaven.

My favorite tamales were the flavorful and steaming hot red pork tamales my grandmother would make in her kitchen back in Mexico when I was a kid. The recipe continues on in my mother’s kitchen, but I’m not sure if I will ever be able to replicate that flavor when it is my turn to give it a go, but it is not for lack of trying.

I have helped my mom make tamales plenty of times, but my mom’s cooking has no recipes, similar to many of your own mothers and grandmas. Instead, it is all from heart, muscle memory and intuition. And I should also add, making tamales requires some finesse to keep a delicate balance of meat-to-masa-ratio and a focus on technique for folding the husk correctly. Pair that with my mom looking over her glasses and dishing out critiques requires a bit of a thick skin. 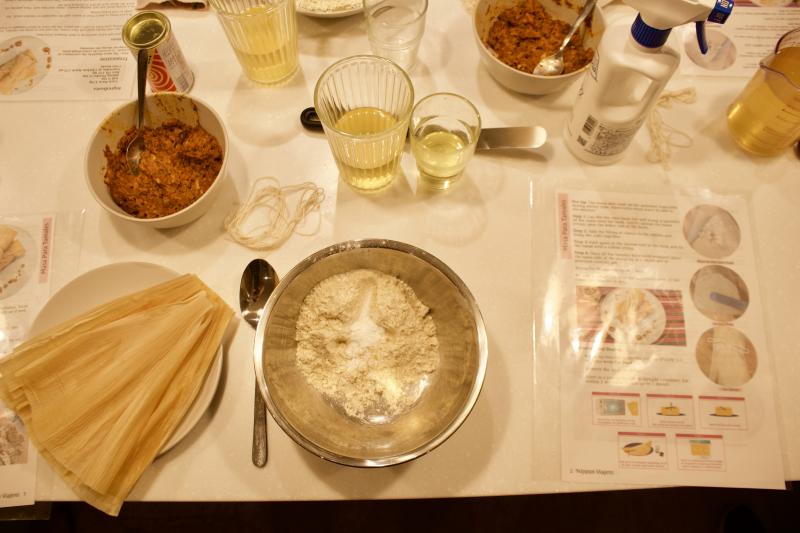 Trying to replicate this experience and that flavor is difficult in Japan. But, of course, it’s not impossible, and I’ve seen many spouses bringing a taste of home to the bases. Still, for me, beyond figuring out my grandma’s recipe, sourcing the necessary ingredients in a country like Japan seems like an enormous feat I should avoid.

Thanks to Nippon Viajero in Tokyo, no more! Nippon Viajero specializes in exposing others to Latin American culture through culinary workshops and private cooking lessons. Like me, founder Vanessa Quintana is from the southwest U.S., so I knew her tamales workshop would be an excellent opportunity to learn and have a familiar taste of home without the pressure of a watchful mother.

My two friends and I were lucky enough to score spots in the last tamales session of the winter. Unfortunately, Quintana said the workshops are seasonal, so you won’t be able to catch the tamales one until next winter. But keep an eye out for the other tasty treats you’ll be able to master with Nippon Viajero throughout the year. You’ll want to act quickly if you see any particular workshop you want to try as the classes are limited to six students.

Nippon Viajero’s kitchen is a few blocks away from Tokyo Skytree. First, Quintana greeted two other students and us with a temperature check, handwashing station and loaner aprons. Once settled in, Quintana went over some introductory knowledge about tamales and the ingredients and recipe. Then, we got to cooking!

With Quintana’s help, each of us stirred our own bowl of corn flour with rice oil and chicken consommé—ingredients modified and readily available in Tokyo—, until we had a nice paste. Then, she demonstrated how to smear the masa onto the pre-boiled corn husks and add the red shredded pork filing she had made ahead of our arrival. By the sound of it, the meat filling recipe is time-consuming. Though I would’ve loved to have seen this process, this is a three-hour class, so I was definitely grateful I didn’t have to do extra work. I’m starting to realize why my mom doesn’t involve me in the early stages of the tamale process either!

After we topped the tamal dough with a little bit of meat filling, we folded the cornhusk and secured it with butcher’s twine. I’ve never used twine to secure tamales nor seen that in Mexico either, but it was very helpful in keeping our tamales separated by person. I also realize that folding tamales is something I grew up doing, so the twine is a pretty smart idea for others new to this art.

We each repeated the dough-meat-fold-secure process for each tamal until we’d depleted what was in each of our bowls. Then, each student wrapped their own tamales into a bundle secured with twine to place into a giant pot with a steamer basket and water inside.

While we waited for about an hour for our delicious tamales to steam, Quintana went over the masa (dough) and meat recipes. She also told us where we could find the ingredients in Tokyo, including the pork cut to ask for at the butcher or grocery store. Didn’t catch the notes? That’s okay, the class also provides the recipe pages used in class via email after so you can always refer back to them.

We sipped on a hot hibiscus blend tea Quintana had prepared for us and talked about the recipes, our familiarity with tamales and got to know each other. The warm hospitality Quintana brings to the class created an atmosphere reminiscent of being at home gossiping in the kitchen, waiting for the first batch of tamales to be ready.

Soon, our tamales were thoroughly steamed and we got to try the fruits of our labor. These tamales were not like my mom’s, but they were mine! They were delicious and I could absolutely see myself trying to make these again in the future. The dough was the right texture and flavor and the meat filling Quintana made was flavorful and had a nice kick without being too spicy for others to enjoy.

Another plus was that we got to keep the tamales we made in class and bring them home with us. I ate tamales for a week thanks to this class!

And now, since I know what ingredients I can get at the Japanese grocery and witnessed my two friends become tamale-making experts, you can bet I will be recreating the tamale parties from back home here in my Tokyo kitchen. Better yet, at the end of the class, Quintana had a raffle and my friend Carolina was the lucky recipient of a tamale-making kit. So, you know we’ll be practicing our new skills together once we’ve depleted our reserves.

When I got back home after a fun afternoon, I got on the phone with my mom. She might have winced a little when I told her I had paid for a cooking lesson she could’ve taught me. However, for me, this was an afternoon well spent sharing my childhood memories and culture with two of my closest friends.

If you are missing a taste of home or are a foodie, Nippon Viajero’s workshops are a wonderful introduction to Mexican dishes made with locally-sourced ingredients. Upcoming classes include tacos and Mexican sweetbread, with hopes to expand to dishes from other Latin American countries.

Pancho Villa the place for some tasty Mexican food