When my wife and I walked in through an old-fashioned façade, I found a casual and cozy interior made up of four wooden tables, large and small, accommodating about 15 customers. Vietnamese-style, colorfully illustrated wooden menu boards hung on the walls. 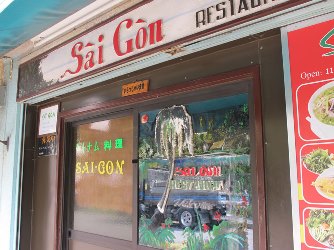 Among many popular dishes, such as cha gio (fried spring roll), pho bo (beef pho) and banh xeo (crispy pancake) available in the shop, Nguyen recommended pho ga (chicken pho) for 800 yen ($7) and bun tiht chat (pork and spring roll on rice noodle) for 1,000 yen ($8), as they exemplify the traditional tastes of South Vietnamese dishes. According to Nguyen, South Vietnam dishes are rather sweet and mild while northern dishes have a sour and spicy flavor.

While waiting, we talked with Nguyen about his life and how he ended up with a restaurant in Yokohama City.

Nguyen, 57, is a refugee of Vietnam War (1964-75), born in suburb of Saigon in Vietnam. When the city was finally occupied by communists during the war, he decided to escape his nation.

“There was no hope to find a job under the new communist administration,” Nguyen said. “What is worse, they were going to send me to the battle fields as one of their soldiers.” 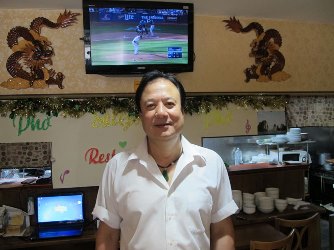 Nguyen hopped on a small boat, left Vietnam and was able to reach Okinawa after a week at sea. After learning Japanese at a Refugee Support Center and working at various locations in Japan, he finally opened his restaurant 17 years ago.

In fact, Ichodanchi housing complex accommodates 2,200 housings, over 1,400 foreign residents, mostly from Indochina and China living in there. To accept refuges of Vietnam War, Kanagawa Prefecture built a refugee settlement promotion center near the location in 1980, and that helped the housing complex become a multicultural community. So, the town is just a suitable location for Nguyen to begin a Vietnamese restaurant.

Not only local Vietnamese in the town, but also Japanese residents, along with some American service members of NAF Atsugi and Camp Zama frequent the shop, according to Nguyen.

Both pho ga and bun tiht chat were very tasty and impressive dishes.

Although they simple and less salty and did not have a particularly strong flavor that Indian, Tai and Korean cuisines have, mixed herbs and spicy sauce made the mild flavor intense.

The spring rolls were tender and meaty, and really went well with the shining rice noodles. The broth of chicken pho was extremely smooth yet full-bodied – various fragrant herbs combined with the gentle flavor of chicken, help make it a really sophisticated soup, which reminded us of sampling superb consommé soup at a 5-star French restaurant. 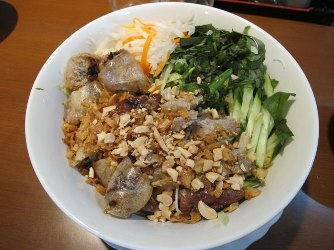 Nguyen added that they cook many off-menu dishes, as well.

“As customers frequent my shop, we learn their tastes, and we cook special dishes according to their tastes,” he said.

If an exotic taste is what you’re craving, visit Sai Gon to get a sample of some authentic South Vietnam cuisine.