Do you ever get a craving that just won’t go away? You wait it out. Hope that after an hour or two (or in my case a few days) you’ll want something else. Something healthier, like a salad. But it doesn’t. What starts out as a hankering ends up being a mild obsession. Has that ever happened to you? This was me and doughnuts the other day. It started on Thursday. I saw something on Instagram (I think) that made me feel like I just had to have one. But I’ve been trying to eat fewer sweets. And it was my mom’s birthday. I knew I’d be eating cake and dessert all weekend long. So I tried to think about something else. The more I tried, the more my mind became consumed with doughnuts. Lemon doughnuts. Glazed doughnuts. Cinnamon doughnuts. All. The. Doughnuts. So… I decided I HAD to make some.

I’ve never made doughnuts before. This was my first time. I’m sure they will only get better the more I make them. So I started by doing a bit of research. Then I figured out what kind of doughnut I wanted and got to work.

I was certain I wanted a fried doughnut. I like the cake variety, but it wasn’t what I was craving. I wanted a fluffy, fried doughnut covered in sugary goodness (also known as glaze). So I opened up Pinterest and searched for a recipe. I must have read at least fifty. They all provided fairly similar instructions with a few differences here and there. Then I looked at a small book with family recipes and found one I thought might work. I wanted something that was fairly simple. I’d never made doughnuts before and wasn’t interested in having my first attempt be really complicated. Also, I didn’t want a recipe that would take all day. Unfortunately, when working with yeast, it’s not always that simple. 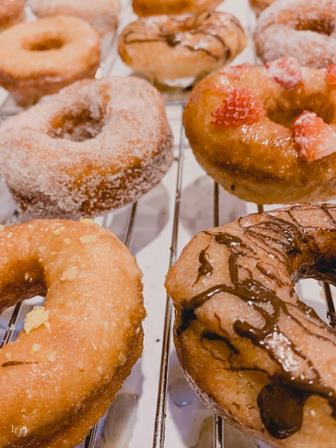 The recipe I used did take quite a bit of time. It requires the dough to rise twice, so it took several hours. I made the first few doughnuts yesterday (they were delicious), but by the time the dough was ready it was late, and I didn’t want to be up all night frying. I stored the remaining rings in the fridge, and allowed the dough to continue to rise overnight. When I pulled them out of the fridge this afternoon, my perfect O’s were deflated. But I set them on the counter to bring them to room temperature and crossed my fingers that they would puff back up. A few hours later, they were nice and fluffy.

I fried them at 4.5 (out of 10) on my glass-top electric stove. I was aiming for 350 F; I think I achieved it. Each doughnut cooked for about 45 seconds on each side to reach a beautiful shade of golden brown. They turned out light and crispy on the outside and a soft, airy inside. I made a variety of flavors to mix it up: sugar, cinnamon sweet, lemon crush, strawberry dream, chocolate drizzle, and classic glazed.

Pour warm water into a large bowl and add the yeast. Let yeast activate (10-15 minutes). Once activated, it will look foamy.

Then, add in warm milk, sugar, salt, eggs, shortening, and half of the flour. If using a stand (or hand) mixer, mix ingredients at a low speed. If you don’t have a mixer, use a wooden spoon to stir all the ingredients together. Add the rest of the flour into the mixture half a cup at a time until and beat (or stir) until the dough doesn’t stick to the sides of the bowl.

Knead the dough until it’s smooth (5-10 minutes). Then, put the dough in a greased bowl and cover. Let it set until it doubles in size (about 2 hours). Don’t put it in the refrigerator or a cold place.

Roll the dough on a floured surface to a thickness of about half an inch. Use a doughnut cutter, biscuit cutter or cookie cutter to shape your doughnuts. I didn’t have any of these. I used a cup. But it worked. Make sure you cut as many doughnuts from the dough as you can. The dough can be more difficult to handle when you re-roll and it’s a little hard to make the second and third set of doughnuts the exact same thickness as the first.

Once you cut them, let them set another hour or two to rise again. They should double in size.

Heat the oil to 350 degrees. I had no way telling the temperature, so watched the oil and tested it by dropping little pieces of dough in the oil. When it rose to the top almost immediately, I took it to mean it was good. Then I cooked the doughnuts on each side for about 45 seconds and placed them on a rack to cool.

When cool enough to touch, I dipped them in sugar or glaze. 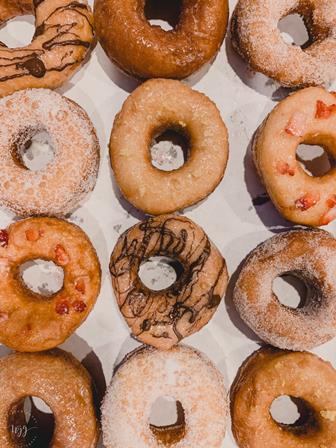 For my glaze, I melted 1/3 cup of unsalted butter. Then, I mixed in 2 cups of powdered sugar, 1 1/2 teaspoons of vanilla and six tablespoons of hot water. With the water, I added them in 1 tablespoon at a time until I got the consistency I wanted. If you like a thinner glaze, add more water.

This recipe yielded two and a half dozen doughnuts and holes. And they were DELICIOUS! Definitely worth the time and effort. And absolutely satisfied my craving. What’s your favorite doughnut recipe?

Potluck ideas for the holiday season