Philip Troussier, the French coach who led Japan in the 2002 FIFA World Cup, blamed the weakness of young Japanese soccer players on convenience stores. From what I remember, the point the Frenchman was trying to make was that young people in Japan don’t compete hard enough because convenience stores have made them too comfortable; they can easily get what they need wherever or whenever they want.

I’m not sure if convenience stores are responsible for the sloppy performance of Japan’s national soccer team, but it is true that Japanese convenience stores, commonly called “conveni,” have advanced to the point of spoiling customers.

Although I am no longer young, I guess I belong to a generation that was “spoiled” by the ubiquity of convenience stores. It is hard for me to imagine life without them, and it has been that way ever since the first “conveni” opened on Okinawa when I was a middle school student. Back then, I mostly bought snacks and sweets. Nearly 30 years later, I still do the same, but my shopping list now includes items like bento, bread, alcohol, and other necessities. I’d say I go to the convenience store nearly every day. 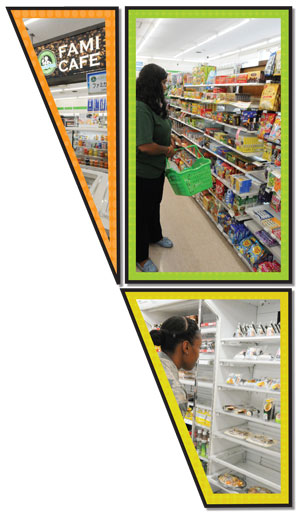 If you come to Kadena Air Base, you’ll probably notice the Family Mart just outside Gate 1, the main entrance to the facility. This location, one of 279 stores in the prefecture under the “Okinawa Family Mart” chain, is where many people from the U.S. military facility and the local neighborhood come for fresh food during lunch hours.

“I regularly buy a bento meals and drinks at this store,” said Gina Delacruz, a young lady from Kadena. “Here, you see a lot more variety and more healthy food than you would see in convenience stores in the U.S.”

“I come here two or three times most days for food and drinks,” said Shiko, a middle-aged automobile dealer from the neighborhood. “And I love the coffee. They have a good selection of coffee for reasonable prices.”

Some customers appreciate the various services that this place also provides.

“They have a good selection for whatever you might need,” said James, a young gentleman from Kadena. “It’s really convenient to be able to pay your bills at stores, which you can’t do in America.”

Seeing the way convenience stores are loved by customers, you’d think that business was always good on Okinawa, but that wasn’t the case in the beginning.

“When we started [nearly 30 years ago], convenience stores looked odd in the eyes Okinawans,” stated Naoshi Yoza, a deputy chief of the Family Mart’s public relations office. “Local people were not used to seeing stores open 24 hours a day. Some people didn’t even understand what the stores were good for.”

As soon as Family Mart opened in Okinawa, I became a huge fan of the Mexican/curry fried rice. It was one of those foods you could order at the cash register and have the cashier heat up. My love for the food was almost an addiction. At one point, I ate the fried rice three days a week. It turns out I wasn’t alone in my addiction to the “conveni” food.

“That fried rice was very popular only in Okinawa at first,” Yoza said. “Likewise, snack foods displayed beside cash registers were more popular in Okinawa than in any other parts of the country. It has been like that until now. Whatever the reason is, the fact remains that the per-store sales figures of hot snack foods in Okinawa are the biggest in the country.”

Sometimes, the unique taste of Okinawans sets trends for the rest of the country. According to Yoza, Okinawa Family Marts were the first to sell fried chicken, after seeing the success of Kentucky Fried Chicken.

“If Okinawans love fried chicken so much, why don’t we sell it at our convenience stores?” Yoza said. “That’s how fried chicken came to be sold at Family Mart stores nationwide.”

“Famima café” is another example of local tastes setting trends for the country. This brew-it-yourself service, now available at many Family Marts, saves many heavy coffee drinkers a lot of time and money. There are similar services at other convenience stores across the country today, but according to Yoza, Okinawa Family Mart was the first.

“The idea was generated by Chairman Gouichi Itokazu, who was the then COO of Family Mart Okinawa. He got the idea for ‘Famima café’ when he looked at coffee being served at convenience stores during his days in L.A. as a CEO of Family Mart USA,” according to Yoza.

“Coffee bean grinders and coffee machines were introduced to solve the problem,” Yoza said. “Our customers loved the taste of our freshly brewed coffee. ‘Famima Café’ became a huge success.”

Not only was it a huge success, the “Famima café” was a good learning experience for the company.

“We used to have this perception that coffee is for people in urban areas. People like career women, corporate employees, or young ladies were the ones we assumed as potential customers for ‘Famima Café,’” Yoza said. “Probably we were preoccupied with the image of such people buying coffee at Starbucks and McDonald’s. But when we started ‘Fami Café,’ we saw many customers in work clothes coming to our convenience stores for coffee. That’s how we learned that these people had been looking for a place where they can buy coffee comfortably. I guess lot of them had hesitated to go to Starbucks and McDonald’s in work clothes.”

For an Okinawan, it feels great to see a local company or a branch on the island lead the market trend. According to Yoza, half of Family Mart’s food products are developed locally. As a result, there are many products that reflect the unique local food culture of Okinawa. Given the success of fried chicken and “Famima café,” I wouldn’t be surprised to see unique products such as Awamori coffee, a mixture of local sprits and coffee, become a smash hit across the country in near future. 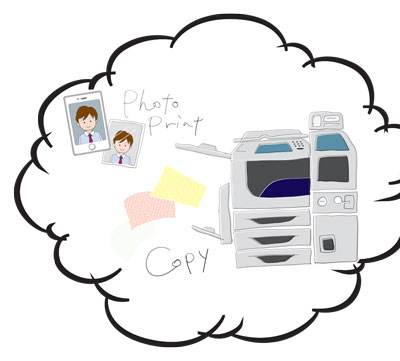 People may have the impression that life in Okinawa is slow and easy-going compared with life in Tokyo or other parts of Japan. That may be true for the most part. However, that’s not the case when it comes to convenience stores in Okinawa, because things come and go quickly.

“On average, 80 to 100 new products are introduced per week,” Yoza said. “Everything from rice balls to snacks – we have so many new things coming in. But only some of those products last long.”

Roughly 3,000 items are available at each convenience store. Among them, only 30 percent survive. The remaining 70 percent will be gone in the end. On the flipside, much can be learned through those failures.

“Okinawa has the biggest number of customers per convenience store in the country,” Yoza said. “Sales figures are high as well. But when we started, we were far from success. There were many challenges ahead. Sales figures on Okinawa used to be the worst in Japan until about 18 years ago. But thanks to locally produced food, Okinawa climbed up the chart. Now it is right behind Tokyo and Kanagawa.”

Without a doubt, this local convenience store chain is now a big winner. This doesn’t mean other chains aren’t eyeing the Okinawa market. In 2018, another big name in the Japan conveni industry – 7-11 – said they would be bringing 200 of its famous stores to the island no later than February 2019. Currently there are 57 stores on the island (as of Oct. 2020). A little friendly competition might be good to spice things up on the island.