Visiting a new place for the first time can make for some exciting discoveries. One of these is especially true when trying the local food for the first time. New flavors and local delicacies always make our travel more memorable and allow us to learn more about the history, culture and traditions through food.

In Japan, every major city, region, and prefecture has its own locally sourced dish and produce, so do some research before heading out. Enjoying the local offerings is a great way to enhance your trip and try something new.
Here are some of my favorite local foods available in or near the city of U.S. military bases. Try sample one or more, and you will see what I mean! 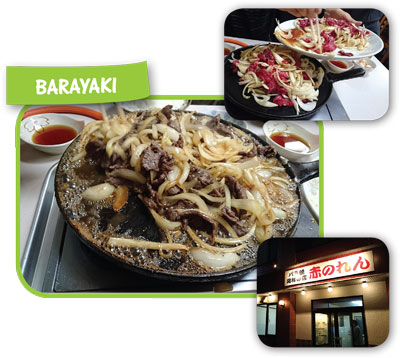 Barayaki, which is grilled beef rib, is known as one of Misawa’s soul foods. This dish consists of well-seasoned meat and onions in a soy sauce-based broth grilled in a large iron pan. The tender, sizzling beef will make you feel warm and happy in Misawa’s chilly temperatures, especially in the winter.

You can find this dish at many restaurants in Misawa, but you don’t have to travel far from Misawa Air Base’s main gate to find a good spot serving up delicious barayaki. Check out Akanoren, only a five-minute walk from the gate.

Akanoren’s red-illuminated sign invites visitors into its cozy and retro interior. When the barayaki arrived at the table in a sizzling pan, the dish’s smell and size were overwhelming, but made me hungrier. I enjoyed the tender, flavorful beef with accompanying rice and miso soup. 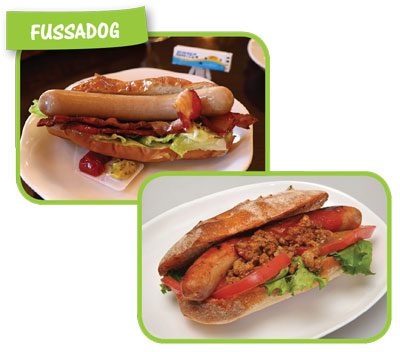 Fussa City, home to Yokota Air Base, always reminds us of its “Fussadog.” Not your average hot dog, this slightly-gimmicky food follows some strict rules to be called a Fussadog. First, the frank must be 16 cm long to represent Route 16, which marks one side of Fussa City’s border. The frank must also be 23 mm thick since Fussa has an alternate meaning, which is 23 in Japanese.

First introduced in 2011, Fussadog was a symbol created to promote the city as it is the home to an American military base and two ham factories, Ohtama Ham and Fussa Ham. You can find the Fussadog in nine restaurants around the city; be on the lookout for red Fussadog flags outside.

I tried two different takes on the Fussadog. First, I dropped by Stuben Ohtama, a German-style restaurant, to sample its original Fussadog for 460 yen ($4). Using smoked Ohtama ham, the hotdog came with bacon, vegetables, and a German-style bun. The meat was crispy and went well with the bun.

Then, I tried Bread Garden’s 330-yen version. This one used juicy Fussa Ham for the frank on a chewy bun topped with cream cheese and salsa.

Both were tasty and different, so I’m looking forward to trying other Fussa restaurants in the future. I found both of them very tasty and look forward to a return trip to try the remaining seven Fussadogs. 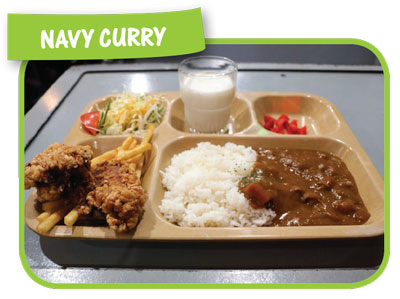 Yokosuka is primarily a naval city, and as such, its delicacy is Yokosuka Kaigun (Navy) Curry. This Japanese-style curry is thicker, slightly oilier, and features ample use of meat and vegetables. Did you know that this special curry was created in 1908 by the Imperial Navy stationed at Yokosuka?

Modeled after British Navy’s curry stew, the Kaigun Curry was adjusted to a Japanese taste and served with rice. The dish soon became very popular among sailors and throughout the nation, eventually leading to Yokosuka declaring itself the “Town of Curry” in 1999. Today, more than 40 restaurants in the city serve the navy curry dish.

Dobuita Shokudo Perry is one of the most recognized restaurants serving the authentic navy curry. The restaurant follows the original recipe by stewing quality chicken and local vegetables for more than five hours. They then add various spices to give it a nice kick. Sample the Yokosuka Kaigun Curry Plate set for 1,200 yen ($11). The set is served the same way it was originally served on ships— with a salad and milk on the side. And for an added bonus, the set also includes fries and fried chicken. 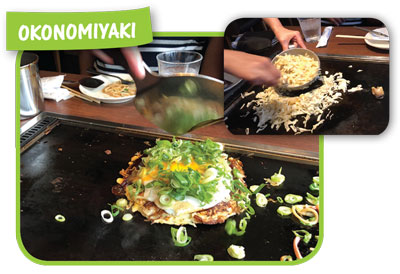 Hiroshima is an hour drive from MCAS Iwakuni and it is also the birthplace of okonomiyaki. This savory pancake dish consists of batter, cabbage, noodles and varying ingredients such as meat, seafood and cheese.

In Hiroshima, more than 2,000 restaurants are dedicated to or include okonomiyaki in their menus. This dish is so popular that other cities around the country also have their own versions. Interestingly, there are two different styles in cooking this popular dish – the Osaka and Hiroshima styles. In general, while the Osaka one applies more mayo and sweet sauce to the dish, the Hiroshima one usually uses noodles (soba or udon), omelet and a lot of chopped onion.

You can enjoy this savory pancake-like specialty in the authentic Hiroshima-style at Okonomi Mura (Okonomiyaki Village) near Hachobori Station. The building houses 25 different okonomiyaki restaurants, but it also has other Japanese favorite eateries like Yamachan, Sarashina and Hassho. 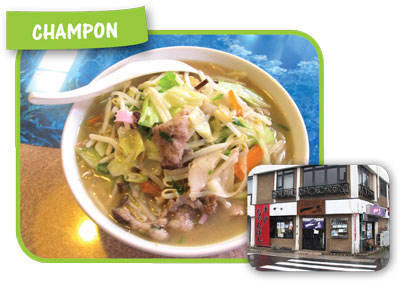 In Nagasaki Pref., home to Sasebo Naval Base, champon reigns king. The dish typically features chewy noodles, chopped fried pork, seafood and vegetables, but the ingredients for the noodle dish differ depending on whether you’re ordering in Sasebo, Nagasaki, Shimabara, or Hirado.

I like the champon in Hirado City because it has incredibly thick and chewy noodles served in a tasty pork-bone broth with fish, squid, clam and local vegetables.

Check out Ichiraku Shokudo, an 85-year-old restaurant near the center of Hirado City, for some champon at a reasonable price. Although my recommendation is its signature noodle dish, Hirado Champon, for 710 yen (about $6.50), you can enjoy another popular local food, “ago” (flying fish), in the Ago Champon for 880 yen.

MY FAVES: Daytrips near your base in Japan

My Faves: Top towers to visit in Japan

Players set to take to the courts, courses again this fall

The joy of living, traveling in Japan