My Faves: 5 instant noodles in Japan

My Faves: 5 instant noodles in Japan

Ever since I started working from home, instant noodles have become my go-to for a quick bite. Usually, quick ramen would just be a weekend snack, but these days it has helped remove some of the stress on cooking during the pandemic.

Below are five of my regular choices that I’ve enjoyed since I was a kid. Having these more regularly has definitely taken me back to those childhood memories. Instant noodles are not just a guilty pleasure. So, try one or all of the options below and itadakimasu! 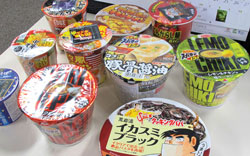 5. Nissin Chicken Ramen Noodle
This is the original instant noodle, the first ever invented, according to manufacturer Nissin Foods holdings. Since its debut in August of 1958, this instant noodle became an instant hit. Sixty years later, it remains the most popular and recognizable on the grocery and convenience store shelves.
This was my mom’s pick to cheer me up whenever I got sick as a child. Its chicken-consommé broth goes very well with its wavy noodles. The combination is something I would have no problem with having every day.

4. Nissin Yakisoba U.F.O.
U.F.O. is instant chow mein I still like to eat even today. This one debuted in 1976 and its name comes from its Styrofoam saucer Nissin used to differentiate it from other instant noodles on the market. I remember that U.F.O. was already very tasty when I had them in the 80s. However, this long-running food product has gone through many updates. Now, its chewy noodles and sweet and spicy sauce have made it even more addictive.

3. Maruchan Seimen Houjun-Koku Shouyu
Different brands advertise how closely their instant noodle offerings resemble noodles made from scratch at a noodle joint. Maruchan Seimen is the textbook example of noodles that are instant but don’t taste like it.
The combination of soft-but-chewy noodles plus smooth soy sauce-flavored broth has me hooked. The flavor is good enough to have alone but also versatile enough to allow you to be creative and add in your own favorite toppings like veggies or meat.

2. Shin Ramen (Shin Ramyun)
When trying to round out this list with a spicy variety, it’s hard not to include Shin Ramen, the South Korean variety found at any grocery or convenience store in Japan. As its name suggests, Spicy Ramen’s red broth is spicy and will not disappoint piquant enthusiasts. Spicy but flavorful, the broth will want you to sip it alone even if it burns your tastebuds a little. A great option for lowering some of the spice is topping the noodles with a raw egg. Give it a try!

1. Otafuku Okonomi Sauce Yakisoba
This instant chow mein comes with a very fruity sauce, which is by itself a huge draw for many yakisoba (chow mein) fans. According to Sanyo Foods, the manufacturer of the noodle, the sauce was jointly developed with Otafuku Sauce, a major manufacturer of okonomiyaki sauce. If you like okonomiyaki, you should give this a try. The noodles soften in about three minutes of soaking in hot water, but since I love chewy noodles, I cut the cook time short to keep the noodles on the chewier side. Not something I recommend for everyone but do experiment with the noodle soaking time to change up the textures.