If you’ve spent some time perusing the aisles of the convenience stores or local supermarkets in Japan, chances are you’ve come across packets or bottles of toppings specifically for rice.

These garnishes are called “gohan no otomo,” which literally translates to “rice escort.” Some of the common gohan no otomo sold in stores include umeboshi (Japanese plums), shake (salmon), and mentaiko (spicy cod roe).

At the store, you may see these are near or labeled as ingredients for onigiri rice balls. They are also a way to change up the flavors and colors to your gohan (rice).

Okinawa also has its own take on gohan no otomo. You’ll find some with spicy flavors, or others with a sweet taste. Though the usual Japanese garnishes are widely available and quite popular on the island, the Okinawa varieties dazzle locals and visitors alike.

Why not jump on the bandwagon and try some? 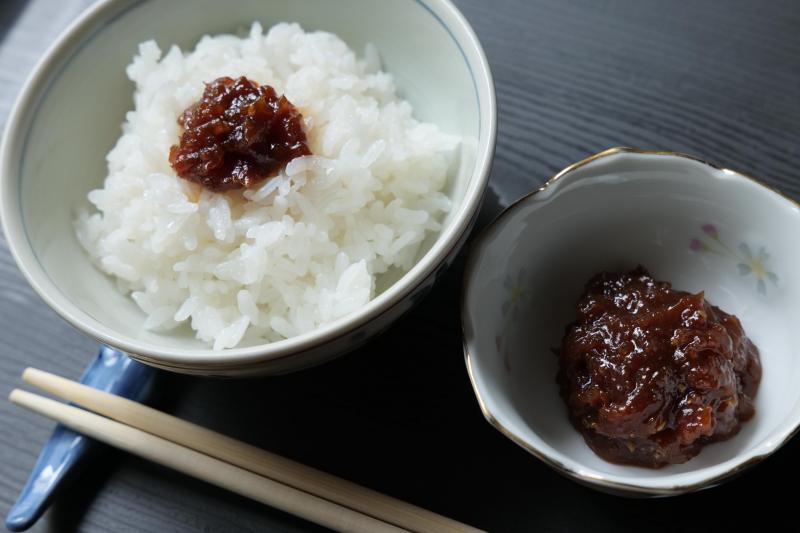 You may know miso from your experience with Japanese dishes such as miso-shiru (miso soup) and saba-no-misoni (mackerel simmered in miso). For Okinawans, miso can be a gohan no otomo as well. “Abura-miso” is a kind of miso that is fried with oil, sugar, pork, fish, or some other foods. Its sweet but spicy flavor appeals to locals across all ages. Several brands are available at local stores for this Okinawan signature food. Or, if you like to cook, it is possible to make andasuu at home. 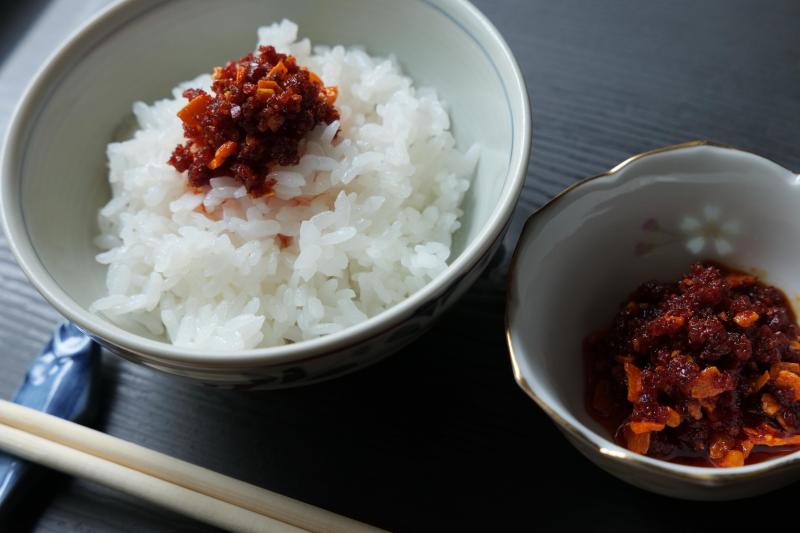 This chili oil-based gohan no otomo featuring pieces of sliced garlic and onion, gained popularity in 2010. Taberu rayu translates to “chili oil for eating” and it was originally sold in Pengin Shokudo, a small Ishigaki Island store. Today, thanks to its tasty flavor and word-of-mouth, major Japanese food companies such as Momoya and S&B offer their own versions all over the country. 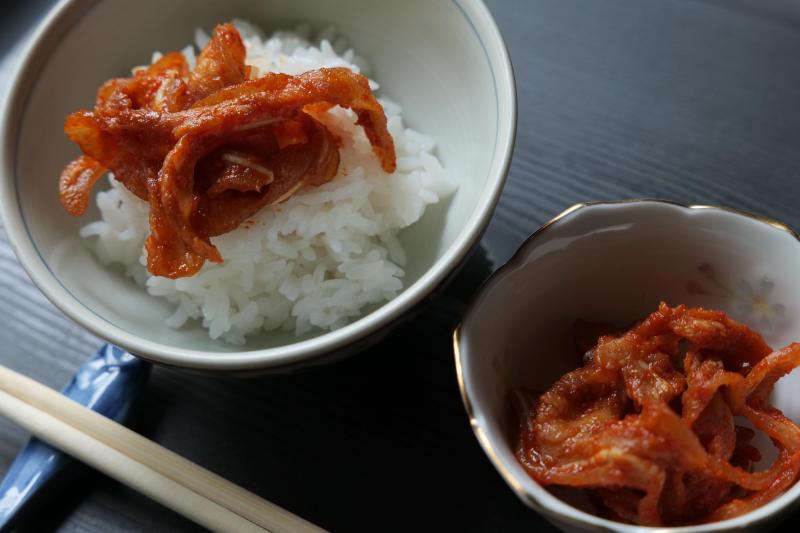 In Okinawa where nearly all pork parts are consumed, “mimiga,” or pork ear skin, is a popular snack food to go with alcohol.  The word “mimiga” literally means “ear skin.” Once it is pickled as kimchi, though, the snack food is also good as a “gohan no otomo.” The chewy but soft texture of the skin and the sour but spicy taste of the kimchi will have you craving another bowl of rice. 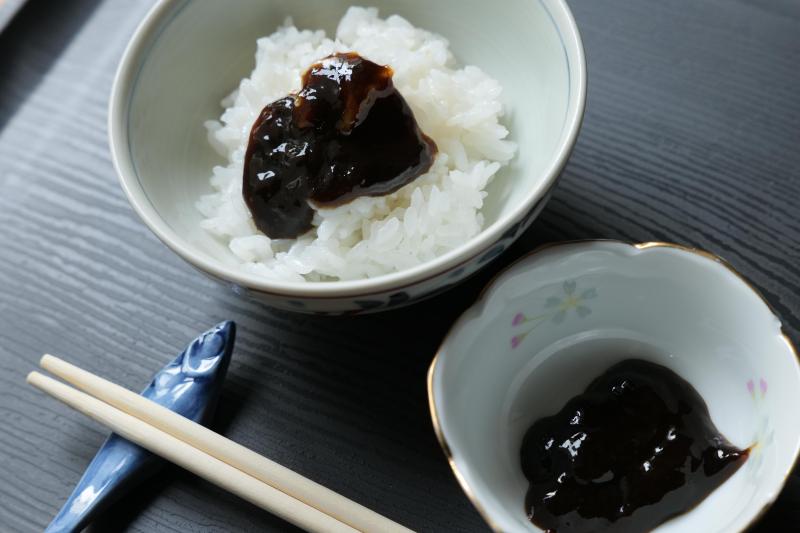 Seaweed, sugar, soy sauce, kanten (Japanese gelatin) and more make up this gohan no otomo. Even if you are a kind of person who would not eat seaweed, mozuku is worth a try because it is rich in nutrition. Plus, when it is served as a tukudani (food boiled in soy sauce), its sweet taste pairs well with rice. 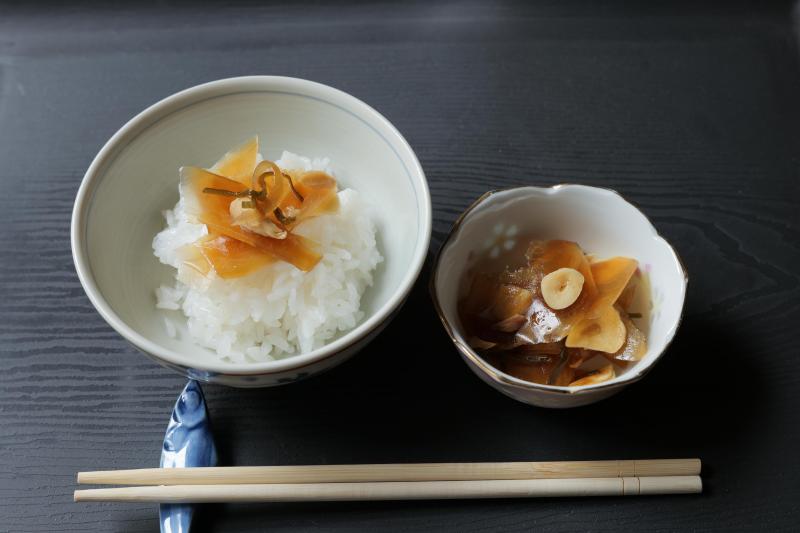 Okinawans are no strangers to tsukemono (pickles). One of the more common pickled items locally is papaya, and once it’s mixed with sugar and soy sauce, you’ll love the sweet and salty flavor. On the island, papaya is treated as both a fruit and a vegetable. Before it ripens, papaya is called “Ao (blue) papaya” and is commonly used for stir-fry. Likewise, it is the premature papaya that is used for the pickles.

As rice is my favorite food, my list of “gohan-no-otomo” doesn’t end in Okinawa. Here are my top-five garnishes for rice from other areas. 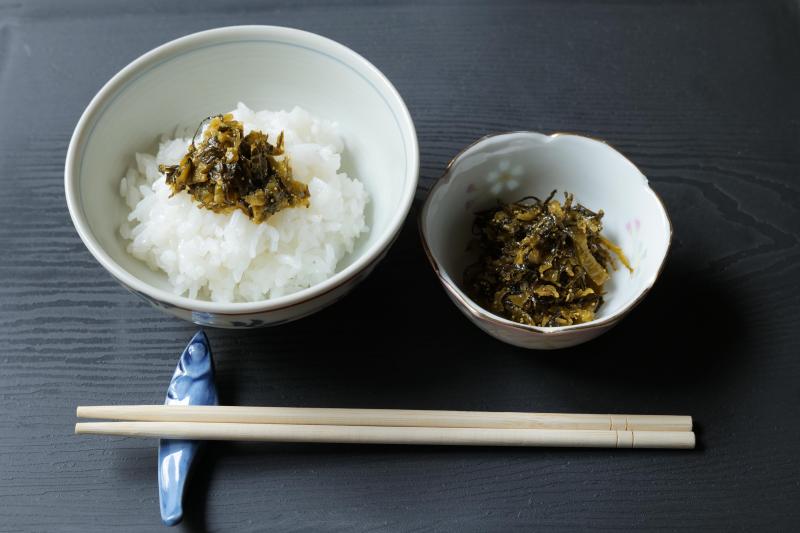 This is my go-to gohan no otomo recently. It has the right amount of spiciness to go with rice. In Japan, takana is mostly farmed in Kyushu areas such as Fukuoka and Kumamoto prefectures. Among several products which are currently available at local supermarkets, my first pick would be the ones mixed with spicy mentaiko (spicy cod roe). The mixture of different spiciness and textures will have you hooked. 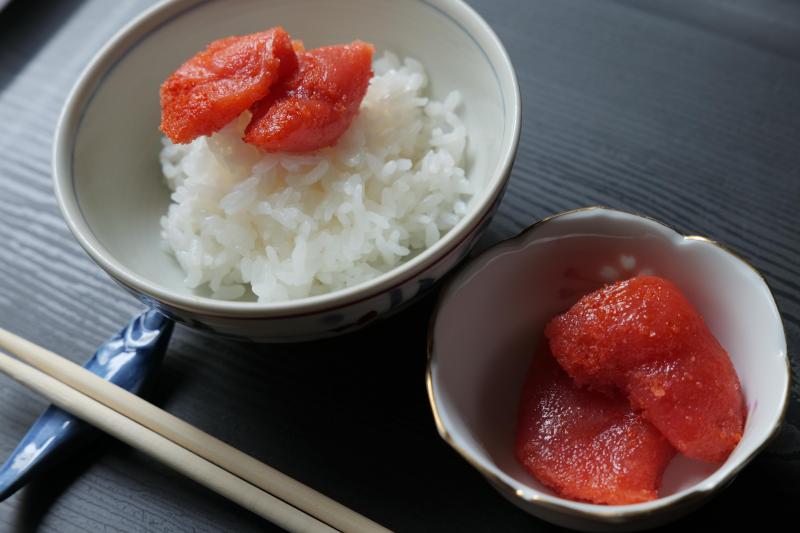 This is a very popular ingredient for onigiri, so you’ll be able to find it at any supermarket. This gohan no otomo is recognized as a signature product of Fukuoka Prefecture. Though mentaiko may not be spicy enough for some spicy food enthusiasts, it is actually intended for the enjoyment of its slight spiciness, the saltiness and savory flavor from the liquor, another ingredient used in its production. 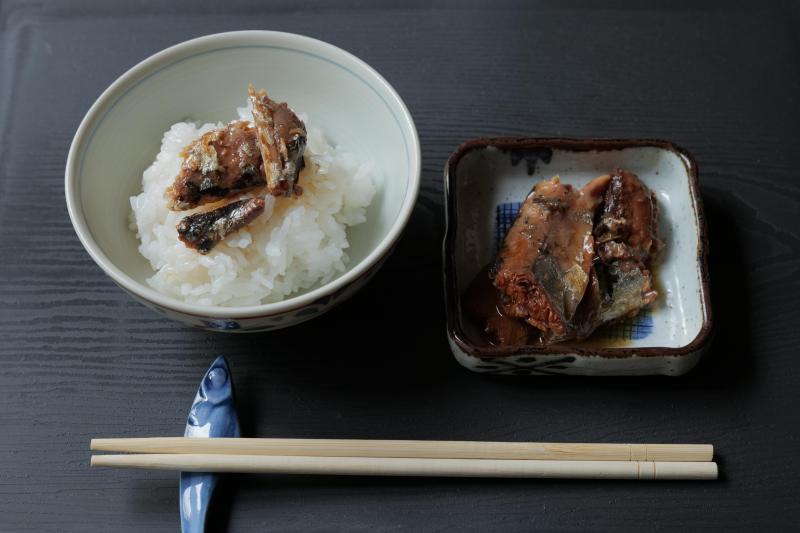 This used to be my go-to gohan no otomo on Sunday afternoon in my childhood when I had to prepare a meal on my own. With sweet sauce, even a fish hater like me used to be could eat fish with no problems. 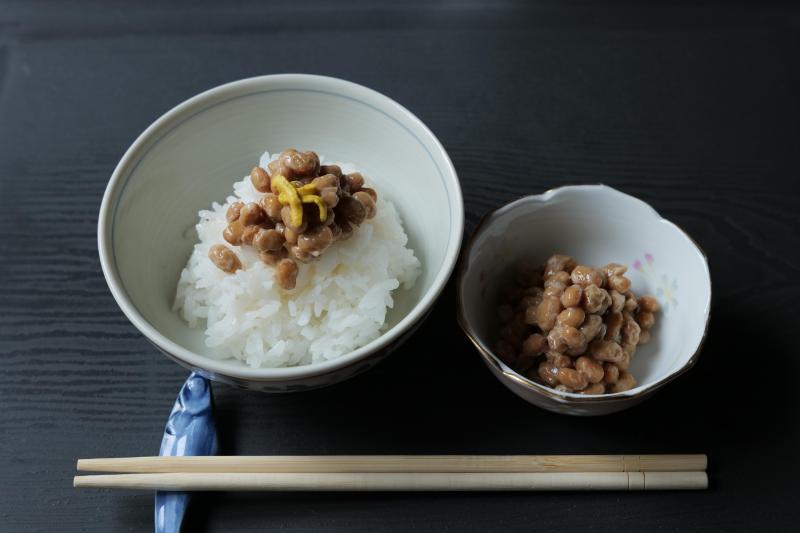 This can be a challenging food if you come from other countries and many Japanese people also don’t enjoy the fermented soybeans with a very sticky texture and not-so-pleasant aroma. Despite its appearance and scent, however, nattou is one of the healthiest foods you can eat. Eating it regularly might lead to you actually reach a point where the stickiness and the unique smell no longer bother you.  Nattou usually comes with pouched sauce or mustard. Those condiments can make the process easier. 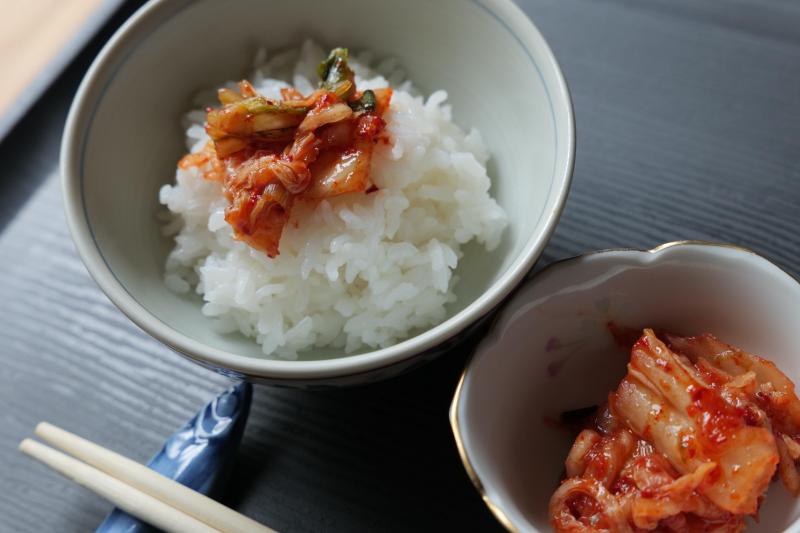 Of course, Kimchi belongs to Korea. But many Okinawans and Japanese love the food as well.

If you live on the island, you have seen many brands of Kimchi at local supermarkets. Some are imported from South Korea while others were made in Japan or Okinawa. I have a soft spot for the word “genuine,” so those from South Korea taste better to me.

Green Tea Furikake: Tea to top your rice with