Sinking your teeth into a slice of tasty pepperoni pizza at Montmartre Pizza House in Nerima-ku Tokyo is like biting into the good old days of the early U.S. military community here. 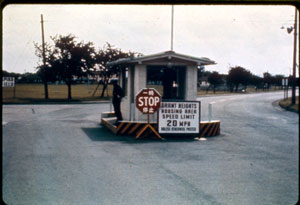 One of Tokyo’s oldest pizza parlors, Montmartre’s owner just marked the restaurant’s 56th anniversary in November. Even more interesting is the restaurant’s owner, Yasuhisa Kamei, 84. He got his start in the local service industry as an NCO club bartender in 1955 at the Grant Heights housing area near Yokota Air Base.

Grant Heights, or as locals liked to call it, “Grand” Heights, was a U.S. military housing complex in Nerima-ku from 1947 to 1973. It once housed more than a thousand U.S. military personnel and their families. Before that, the area was the site of a Japanese Imperial Army air base.

Kamei opened his pizza parlor close to Grant Heights in 1959.

“The NCO club I worked at in Grant Heights was called Elbow Room,” said Kamei. “Back then, there were more than a thousand Japanese workers in Grant Heights and many of them lived in a dormitory on base that was made just for these workers.

“It was almost like heaven for us because the economy in Japan was tough and everything on the base was so different,” he recalled. “It was a very large housing area. Good American living was there.”

Soon after opening his shop, it became a popular dinning spot where Americans from Grand Heights would hang out. The peperoni pizza was everyone’s favorite, according to Kamei, who said he did his own research and taught himself how to make it.

“Customers said my pizza was better than the pizza on the base,” he said. “I remember that the MPs from Grant Heights used to stop by in uniform to pick up pizza, which I believe they were not supposed to do.”

Interestingly, Kamei had always worked closely with U.S. military after World War II. His first job was as an elevator boy at the Hotel New Grand in Yokohama in 1946. Kamei said he also worked at the NCO club at Camp Wood in Kumamoto in the 50s.

“The Hotel New Grand was almost like an officers’ club for U.S. military folks during that time,” Kamei said. (To this day, it keeps one suite just as it was when Gen. Douglas MacArthur once occupied it.) “I was told that I was not supposed to speak Japanese there, only English. That was around the first time I ever had pizza. It was pepperoni pizza; and I’ve been in love with pizza ever since.”

After the Grant Heights housing area was returned to Japan in 1973, it was replaced by a high-rise residential buildings and the mammoth Hikarigaoka Park. It’s not the only change. These days, you won’t see very many U.S. service members at Montmartre Pizza House, either. 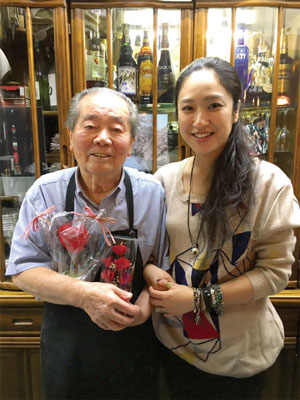 “It’s sad that all the old buildings from Grand Heights have been replaced,” Kamei said. “I always miss Grand Heights whenever I drive past where the main gate used to be.”

Kamei’s sincere hospitality and tasty handmade pizza, however, have been attracting new generations of Japanese fans. At the age of 84, he still opens his shop every day and occasionally can even be found mixing cocktails at the bar.

What’s the secret to his staying power after running a pizza parlor for more than half a century?

“Don’t expect too much and take it slow,” Kamei said gently. It appears to be working.

He says his most popular pizza is still pepperoni, which sells for 900 yen ($7.33). Other favorites include pineapple and ham pizza for 1,200 yen, the BLT sandwich for 900 yen and minestrone spaghetti soup for 900 yen.

Those looking to partake in a little nostalgia with the owner will find that the classic 50s-style Americana interior, with its counter and two tables, sets the perfect mood for reminiscing about the good ol’ days. There are even a few photos of Grant Heights from the 1950s adorning the walls.

It is a rare opportunity to enjoy a slice of American military history in Japan – along with some delicious pizza at the same time.

I Love Pizza: An authentic slice, minus the corn

10 places in Tokyo to grab pizza and beer: Logic