A look at 10 Japanese veggies and how they are used

A look at 10 Japanese veggies and how they are used

Often overlooked, Japanese vegetables are every bit as important to Japanese food culture as seafood and meat. Japan uses an abundance of root vegetables, leafy greens, and many others in its cuisine. Vegetables play a prominent role in not only salads and side dishes, but soups, main courses, and even desserts.

The following is a selection of ten Japanese vegetables that are commonly used in cooking. 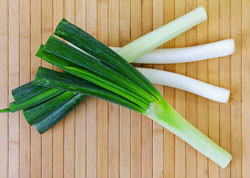 One of the most ubiquitous of Japanese vegetables, negi, is often mistaken for the Welsh onion and the leek due to their striking similarities in appearance and taste.

In Japanese, it may also be referred to as “naga negi” (long negi) or “shiro negi” (white negi).

This long, green onion is used to add flavor to simmered dishes, as well as soups and hot pots.

Negi is especially popular during the winter months, as it is also known for being a popular cold remedy. 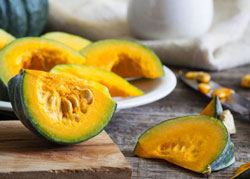 Kabocha is a type of squash, similar in taste to pumpkin, but known for being slightly sweeter. These gourds are stout and dark green in appearance, revealing a bright orange color when opened.

Kabocha simmered in soy sauce, and sugar is a typical home-style side dish. When cooked, the skin is entirely edible and as delicious as the inside, so make sure not to waste it!

It is also a popular Japanese vegetable tempura item, and both diced and mashed kabocha are used for salads. This food is said to be rich in beta carotene and vitamin A, and also contains vitamin C, iron, and potassium.

The word daikon means “big root,” and this white radish certainly lives up to its name!

Crispy when raw, and tender when cooked, this Japanese root vegetable has a milder taste than some other types of radishes.

This versatile Japanese vegetable can be prepared in a variety of ways. It may be simmered with seafood, cooked in soups or pot dishes such as oden. When grated raw, it is referred to as daikon oroshi, which is popularly eaten with grilled fish, both soba and udon noodles, and also tempura.

Daikon is known for being a good source of fiber, folate, riboflavin, and potassium, as well as containing various other vitamins. 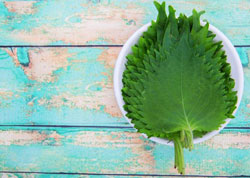 If you’re looking for an herb that leaves an impact on your tastebuds, look no further than shiso.

Known in the west as perilla or beefsteak plant, this leaf is known for packing a sharp, flavorful punch.

There are different types of shiso used in Japan. Green leaves are known as aojiso, while the red leaves are akajiso.

In Japan, aojiso is a characteristic flavor for Japanese-style salad dressing, and shiso can often be found paired with umeboshi (pickled plums) when adding flavor to rice.

In addition to being flavorful, this leaf is known for its nutritional benefits, including its relatively high omega fatty acid content. 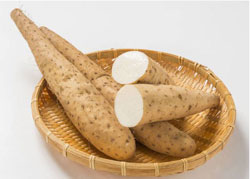 Naga-imo means “long potato,” and it is easy to see why! However, unlike a typical potato, it is most commonly served grated, a preparation known as tororo, which is a slimy, gooey topping served on rice and noodles.

It is also used as a thickener in the pancake-like dish called okonomiyaki.

Its mellow taste makes it the perfect accompaniment as a vegetable whose flavor will not overpower the main dish.

Even better, it is a good source of protein, potassium, magnesium, and other vitamins! 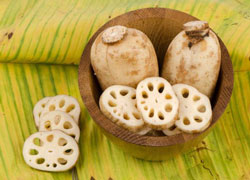 Renkon is a Japanese vegetable that can be found in all sorts of Japanese dishes.

While the lotus plant may be most well-known for its blossoms, its roots are prized in Japan for its crispiness and delicious taste.

Its firm texture makes it ideal for tempura or in stir-fry, in addition to being rich in nutrients.

Whether pickled, sauteed, or fried, renkon is undoubtedly worth tasting! 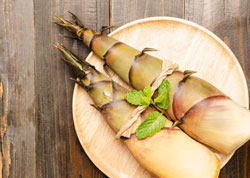 In Japan, bamboo shoots are the characteristic food of the spring season.

Tender and savory, they are the star of the springtime favorite, takenoko no gohan, a bamboo shoot rice dish. Takenoko is also delicious when stewed or simmered with other vegetables and meat and is a good source of protein and fiber. 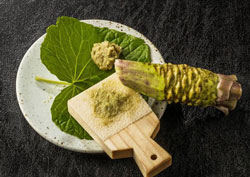 People worldwide have become familiar with wasabi as the green condiment with a burning hot taste that is served alongside sushi.

However, they may not be aware of how it is made; the paste known as wasabi is the grated stem of the wasabi plant, which is related to the family of plants that includes horseradish and mustard.

In fact, what is called “wasabi paste” is often not real wasabi, but a mixture of horseradish and food coloring. This is due to the very particular conditions required to cultivate the wasabi plant, resulting in a somewhat high price.

But almost anyone who has tasted genuine wasabi will say that this rare treat is well worth it. 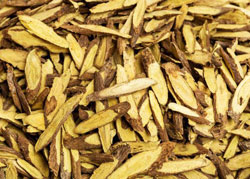 Gobo is a long Japanese vegetable root that is popular for being both tasty and nutritious.

It is not only used in soups and simmered dishes, but also in the form of tea. Burdock root has something of a sweet flavor that many compare to the lotus root. And like lotus root, it has a crispy texture that does not soften even after cooking.

If you have the chance, we recommend the unique burdock root dish gobo kinpira.

Gobo is another Japanese root vegetable thought to be a cold remedy and is high in iron. 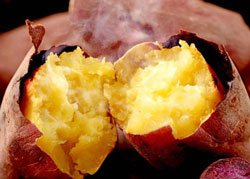 While sweet potatoes are famous in many places in the world, there is perhaps no country that enjoys them in as many ways as Japan.

Despite being a beloved Japanese vegetable, the sweet, delectable taste of satsuma-imo make a prime ingredient in many desserts, such as the famous candied sweet potato treat daigaku imo. It is so prevalent in Japan that it is even a flavor of ice cream! However, it is also featured in other kinds of dishes as well.

As sweet a treat as they are, satsuma-imo are very healthy, low calorie and a good source of vitamin C. If you are in Japan, don’t miss out on this unique vegetable!

Taste the Rainbow of Japanese Vegetables! 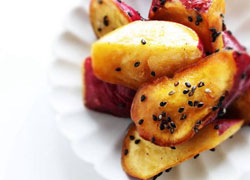 While we’ve included ten of the most famous Japanese vegetables found in the country, it is by no means a complete list, so don’t be surprised if you come across even more delicious vegetables while tasting the country’s exquisite cuisine.

Vegetables with Foam of Rocket and Anchovy Mayonnaise