Kaiseki: The art of Japanese plating

Kaiseki: The art of Japanese plating

For anyone that has relished the delicately complex beauty of a kaiseki (multi-course) meal, has wondered why sushi looks particularly attractive in Japan or has tried to plate any meal ever and make it look half-decent, they may be relieved to hear that the splendor of Japanese plating is no coincidence. Putting food on a plate in restaurants in Japan is a highly codified process, an interplay of several cultural factors and accepted plating principles. Fundamental to it all is the intention of Japanese cuisine to not just appeal to the most immediate sensory denominator for food (taste), but to appeal also to the eye. 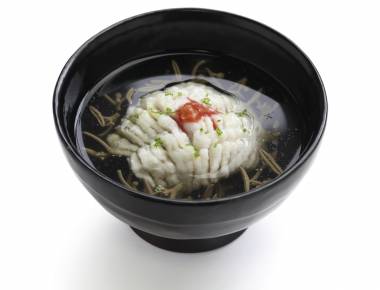 Here are several of the key concepts.

A dish is considered well harmonized in Japanese cuisine when it feels peaceful to look at. Interestingly, symmetry is not a prerequisite for this, but quite the opposite. A bird’s eye view of a Japanese plate will generally show an off-kilter, yet visually pleasing arrangement. Symmetry is regarded to be predictable, where asymmetry is tantalizing and engaging. Japanese culture also prizes asymmetry in numbers—3, 5 and 7 are found commonly in plating. Five, in particular, is regarded as auspicious and is reflected in many facets of Japanese cuisine. The five senses—taste, sight, smell, hearing, touch—are regarded as important to a balanced meal. The five colors—red, blue (interpreted as green), yellow, white, black—are collectively represented in many dishes and meals. The five tastes—sweet, salty, savory, bitter, sour—are key to balancing flavor. Contrast is also important to balance in color and taste, as well in texture. Silky, creamy chawanmushi (steamed egg custard) comes topped with popping, briny roe. Bitter mitsuba greens are mixed with sweet rice and sour vinegar, served on a black dish, and covered with bright orange and salty-tasting grated karasumi (dried mullet roe). Garnishes like pieces of pickled daikon, a herb leaf, citrus zest, chirimen (dried whitebait) and bonito flakes, add contrasting color accents, as well as help balance flavor and texture. 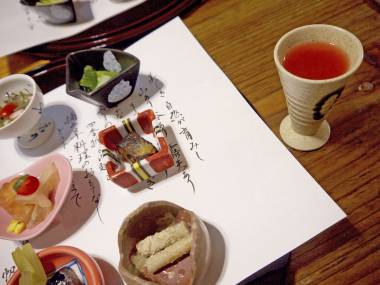 Western restaurants and homes have a tendency towards plain plates, and there is a sense of unity in a ‘set.’ In Japanese culture, it’s the opposite—there is enjoyment in the expression of a variety of vessels. Japanese receptacles come in an array of shapes, sizes and colors, are made from pottery, glass and lacquer, and are often emblazoned with decorative patterns. Receptacles are chosen based on the dish to be presented, and often inspire a dish. The result is a technicolor kaleidoscope that somehow manages effortless composure—not unlike the vastly contrasting fabrics of a junihitoe (kimono of the ancient Japanese court).

Japan’s staunch allegiance to seasonal eating is unwavering. Each season is like a complete scene change on set, from what’s featured on menus, cooked at dinner parties, in bento boxes, and at convenience store ice cream cabinets. Plating proudly showcases seasonal produce, as well as theming the colors of ingredients and servingware for a season—pink and green for spring, reds and gold for autumn. Noodles may come served in large bowls in winter and chilled on top of ice in bamboo baskets for summer. Even chopstick rests provide seasonal cues—a cherry blossom in spring and maple leaf in autumn.

In Western restaurants, plates are piled high and to the edges with food, and white space is usually the marking of a fine-dining establishment. In Japanese dining, plates are rarely fully covered—30% is considered the minimum amount of space to leave empty. This concept of empty space in Japanese culture is called ma, and echoes through many aspects of Japanese life. Japanese interior design is famously minimalist, and traditional Japanese painting is often predominantly negative space. Ma is the void between things, an emptiness that is full of possibilities. In plating, this negative space focuses the diner’s attention as distractions are omitted, as well as stimulating a connection from the eye to the palate by providing a sense of intrigue that makes the diner want to find out more. 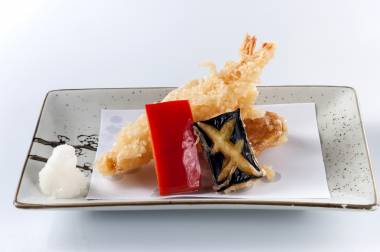 The arrangement of food on the plates of Japanese restaurants is largely dictated by the rules of moritsuke, or serving arrangement. These are a set of styles that draw on the ideas of balance and contrast, underpinned by ma and seasonality. Here are some of the most common. Hiramori is the arrangement of food on a flat plane. Similar sizes and colors of food are placed together, in a slanted direction. Tenmori is the final touch (using the kanji for ‘heaven’), which provides balance in flavor and appearance; Yama no katachi is a mounded, mountain-like arrangement; For sugimori, food is in a conical shape that resembles a cedar (sugi) tree; Kasane-mori is vertically layered arrangement; Nagashi-mori is a mountain arrangement in a sunken vessel; Yosemori comprises two or three contrasting ingredients gathered centrally; Chirashimori is a ‘scattered’ arrangement, and thought to be the most difficult as it relies on the ability of chef to balance aesthetics of random arrangements; Sansui-mori is a landscape arrangement, and may include metaphorical elements such as fanned slices of fish to indicate waves; Sugata-mori is a ‘figurative’ arrangement, which is where a fish or other ingredient is placed in the shape of the original entity.