During lunch, you may have witnessed a Japanese coworker eating out of a home-packed box. Or maybe during a stroll in the park, you noticed a salarymen sitting on a bench with a smartphone and a little wooden lunch box.

These colorful and artistically arranged dishes in a pretty lacquer boxes are often eye catching.

They are traditionally put together by the homemaker in the family for their spouse, children or themselves. In fact, my wife still prepares a bento for our 25-year-old daughter who, appreciates the convenience and cost, or lack thereof.

But, making these boxes isn’t like throwing a sandwich, crackers and juicebox in a bag. When making a bento, the key is paying close attention to the nutritional balance and an aesthetically pleasing arrangement.

According to my wife, these requirements often mean visiting several different supermarkets to buy various foods, including some pre-cooked foods and frozen products.

The tradition of bento goes back to the feudal era when soldiers carried dried rice in a small bag and ate them in between battles. In the Edo era (1603-1867), the tradition of bringing food in lacquered wooden boxes to go along with hanami, tea parties and various other celebrations outside the house was established, according to National Rice Association. 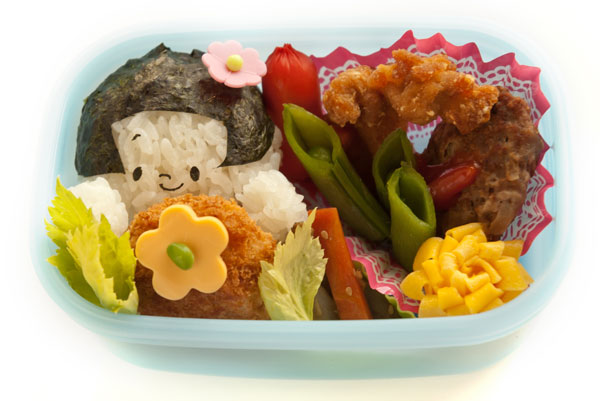 Although bento was meant to be a portable homemade meal, it has since become less and less homemade. Commercial boxed lunch franchise Hokka Hokka Tei began offering its take-out bento in disposable boxes in 1976. The freshly cooked, piping hot meal attracted salarymen and rapidly spread across the nation with nickname of “hokaben.”

Convenience store chains soon followed the trend and started offering their so-called “convini bento,” which helped lead to the mass production of prepared lunch boxes throughout the nation in the early 1980s.

While hokaben and convini bento have been gaining in popularity, homemade bento is still popular among those who want to keep the food expenses low, just like my daughter. But there are plenty of other reasons, as well.

“Homemade bento enables me to stay in the office, which helps me accomplish more work in my busy day,” says Ayako Kamio, a Stars and Stripes designer. “Preparing my bento by using three colors (red, green and yellow) of ingredients for good nutritional balance, helps me stay healthy and eat a well-balanced meal, too.”

Kunihiko Ishii, a Tokyo Salaryman who works for a mobile phone company, always buys a bento at the convenience store to avoid waiting in line at the often-crowded restaurants around him.

“It is much better and less stressful to eat a bento in a park than waiting in a long line for a restaurant,” Ishii said.

A typical bento is made up of rice, karaage (fried chicken), fried or grilled fish, eggs or hamburger. These foods are packed into a tiny rectangle wooden, plastic or aluminum box. The rice is often wrapped with seaweed, or comes with pickled plum. In the box, partitions separate the rice and staple food from other small bits of accompanying ingredients, such as pickles, boiled or fried vegetables and fruits.

Among the various kinds of bento, one of the simplest and most popular forms is onigiri, or hand-shaped rice ball. Wrapped in seaweed, the salt-flavored rice contains various ingredients, such as flaked salmon, fish roe or pickled plum in the middle. Convenience stores often have stocked shelves of various types of onigiri. 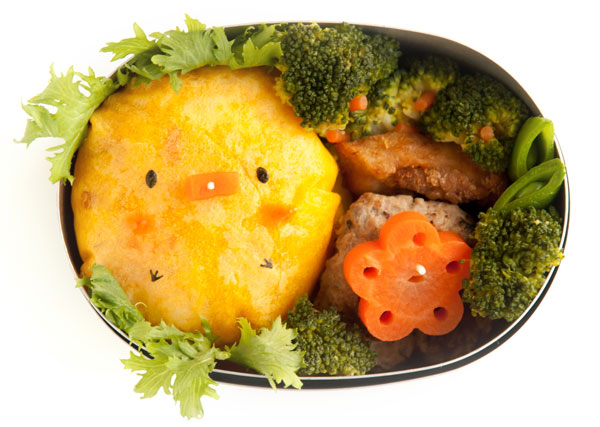 Bento goes well with family trips, picnics and sporting events, as well. For a school field day, mothers will compete by preparing a gorgeous bento for their children to be proud of among their friends.

Bento is often found at gatherings like a funeral or town assemblies, as well.

At a train station, various ekiben (train station lunch box) cooked with local delicacies are available. Be sure to grab one at a station bento shop the next time you hop on the shinkansen.

Some of the top bento in Japan

These are popular forms of bento. Some of them are available in a local bento shop or convenience store. Try one and enjoy the taste of lunch in the Land of Rising Sun!

1. Onigiri (Omusubi) – A hand-shaped rice ball wrapped with seaweed and full of a variety of ingredients, such as pickled plum, flaked salmon or various other fish in the middle.

2. Hinomaru Bento – A boxed dish consisting of plain white rice with a pickled plum in the center. It is named after the Japanese flag which the dish resembles.

3. Kamameshi – Rice boiled with chicken, crab or other ingredients in a small clay pot.

5. Sakeben – Boxed rice with a slice of broiled salmon and pickles.

11. Katsudon – A Bowl of rice topped with a breaded deep-fried pork cutlet and egg.

Tips and recipes for a safe, tasty bento

Tips and recipes for a safe, tasty bento