Look down the main alleyways of most major Japanese towns and you will probably find one or two small shops with red lanterns, or “akachochin,” at their entrances. The scene is likely to be accompanied by the aroma of skewered “yakitori” chicken over hot coals and the sounds of merrymaking.

These are Japan’s ubiquitous “izakaya” pubs where people relax and enjoy a local taste of good times with good food and drink.

Izakaya, literally means “stay-in” (i) (liquor shop” (sakaya); these are much-loved local establishments for casual drinking and dining. Since the prices are usually more reasonable than those at restaurants and fancy bars, they are favorite places to grab a couple of drinks after work or have a casual party.

It is said that izakaya were started in the Edo Period (1603-1867) when sake was sold at large in individual servings. People would drink in front of the liquor shops, so eventually the shops began to serve simple foods to go with it. As matter of fact, you can still find some liquor shops that have places to sit and drink with simple finger food today.

Today, there are more than 80,000 izakaya throughout Japan, according to Nippon Telegraph and Telephone Corporation data. There are various types.

Some izakaya have traditional private rooms with tatami mats, where you need to take off your shoes. These places are often used for big groups such as company parties.

Chain iazakayas such as Shirakiya, Warawara and Uotami are popular with all groups, young and old, alike because they are very affordable, easy to find and have a large capacity.

Traditional-style izakaya, which are called akachochin for their red lanterns, are favorites among older patrons, but they are my personal favorite, too.  Akachochin izakaya are usually smaller establishments that may play folk music such as “enka” inside. These shops tend to draw regulars from the surrounding neighborhood. What I love the most about akachochin is listening to the local patrons talk.

In Okinawa, there are also “minyo izakaya,” which feature stage performances such as “eisa” and “shishi-mai (lion) dances as well as traditional “shimauta” (island songs). Some of these establishments are old Okinawan homes that have been renovated and the servers wear traditional Ryukyu attire.

There are also Western-style izakaya, which are more stylish and modernized to draw in couples and the younger generation. Standing-bar izakaya, or ‘tachinomi,’ are also popular because their prices are even more reasonable.

In fact, there are so many types of izakaya that you can’t always be sure whether to call some establishments izakayas. For example, some people call a Spanish tapas bar an izakaya, while others call it a dining bar.

“There is no regulation in Japan that defines an izakaya because there is so much diversity in what we call izakaya today,” said Sachiko Sakurai, secretary general of Japan Izakaya Association. “But basically, we consider an izakaya to be a place you can enjoy both eating and drinking. I think that in many foreign countries, people go to restaurant to eat and they go to bar to drink. But izakaya are places where you can satisfy both desires at once. Also, it is a place for communication. It’s a place you can eat, drink and talk.”

Although the legal drinking age in Japan is 20, patrons of any age can eat in at most izakayas but they must be of age to drink alcohol. Parties with members under the age of 18, must leave by 10 p.m., according the Japanese law. So, it is no problem if you want to have a family dinner at most izakaya. There are, however, some where patrons must be 20 or older to enter.

Weather up north or down south, however, izakaya culture abounds. And there’s no better place to get a taste of local culture than your local izakaya.

“When you are in izakaya, you will often see people having fun and mingling with strangers,” said Sakurai. “It is hard to see something like that in Japan. You don’t see that on the train or any other public place. But I think when people are in an izakaya, they tend to communicate more and everyone makes friends more easily. Izakaya are a very important part of Japanese culture.”

Anyone new to Japan’s local “izakaya” pub scene may find that many of these establishments – especially the more traditional – may be a little more challenging to navigate than a restaurant or simple bar. But don’t let that stop you, says Sachiko Sakurai, secretary general of Japan Izakaya Association.

“It may be hard for foreigners to come into an izakaya for the first time because servers may not speak English and they usually don’t have English menus,” he says. “But it’s worth trying. (Most servers) are willing to help you even though they don’t understand English.”

Here’re a few things to look out for.

In most izakaya, a small dish called “otoushi” will be served even before you order anything. These customary small appetizers come whether you like it or not, and are included in the cover charge added to your bill (usually 200 to 300 yen per person). Some people judge the character and taste of the izakaya’s food from the contents of the otoshi. So don’t hesitate to give this snacks a try.

One of the biggest difference between izakaya and restaurant is that the portion of food is very small. These small dishes are called “tsumami” which are prized locally as something to go with the drinks. Tsumami can vary between from the seasons and places.

“The good thing about izakayas is that you can try many different foods in one table because each portion is small,” said Sakurai. “So, you can order yakitori, sashimi, sushi and many other dishes without getting full too fast. It is something like dish department store. I think that for foreigners especially it is a great way to try variety of Japanese foods.”

There are so many dishes to choose from the menu in izakaya from Western food to Japanese food, and from pancakes to cow’s tongue. Some of the popular dishes among Japanese include “edamame” (young soybeans), “karaage” (fried chicken), “sashimi” (raw fish), “tempra” (deep fried vegetable or seafood), tofu (bean curd) and yakitori (skewered chicken).

You may already know that Japanese love to drink. We enjoy our beer, shochu (a Japanese distilled beverage), sake (rice wine), whisky or any alcohol drink.
“Sour,” sometimes called “chuhai,” is also a popular izakaya drink on Okinawa. This is a cocktail containing shochu, soda and fruit juice. Some popular sour flavors include lemon, grapefruit and oolong tea. In some places, if you order a grapefruit sour, they will bring you a half cut grape fruit and squeezer to squeeze the juice to pour into your shochu drink.

High Ball is also popular drink in recent trend, which is a mixed drink of whisky and soda. A jog of draft beer usually costs from 400-600 yen ($4-6). But if you find izkaya which has happy hour or any discount campaign, you will be able to get cheaper price. Also, some izakaya have an all you can drink system for certain period of time.

If you find your favorite Izakaya, some izakaya have “bottle keep service” which the place hold your unfinished bottle of awamori or shochu until next time you come back. And it usually becomes cheaper than ordering a glass each.

“So don’t hesitate to try it,” Sakurai says. “I hope you will find your own favorite izakaya.”

When you are drinking with Japanese friends or in any Japanese party. When they make a toast, they may say “Kanpai,” or cheers. According to Japanese custom, you are not supposed to take a sip or bit until everyone is served and the first kanpai is performed.

After the first kanpai, it’s customary to pour a drink for others in your group. So, if you see someone’s glass is empty, try to refill it for them. If someone wants to refill your glass, you are supposed to make a sip and put the grass down for the refill. This is a popular practice at company parties. But if you are drinking with friends casually, it’s not must-do thing.

Yakitori: It is loved by Japanese for its reasonable price and delicious taste. Even though yakitori literally means “grilled chicken,” it does not mean only chicken on a stick. Yakitori is used as the general term as any skewered items on the grill. The most popular is Negima, a skewer of small pieces of chicken thigh. Sasami is a skewer of minced chicken. Butabara is a skewer of pieces of pork.

There are vegetable skewers as well, such as asparagus, shiitake mushrooms and green peppers. When you order yakitori, you can choose to have them grilled with shio (salt) or sauce (tare). The sauce is made of mirin, sake, soy sauce and sugar, giving you a taste similar to a teriyaki sauce. 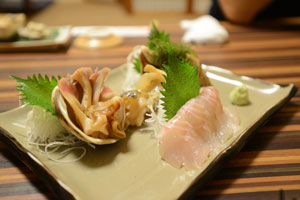 You can find fresh sashimi at most izakayas.  They usually have “Sashimi no moriawase,” which is the selected fresh fish of the day. You can also order individually as well.  The popular sashimi in izakayas is tuna or “maguro”, salmon or “sake” and horse mackerel. 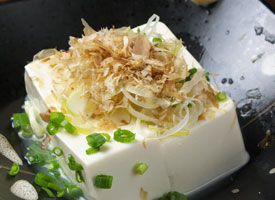 This best to eat on the hot summer night. Chilled tofu served with grated ginger, green onion and bonito flakes is simply delicious and helps to cool you down.  Good appetizer to start the night. 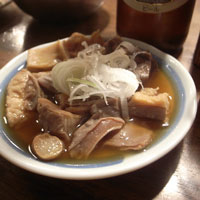 It is one of the most classsic izakaya dishes. Motsunikomi is pork or beef offal stew with vegetables such as carrots and radish in miso base soup. Make sure to put some spice powder or “shichimi” from the table into motsunikomi if you’d like to add a little kick to it. Shichimi is mixed with Japanese chili pepper, ground sansho, roasted orange peel, black sesame seed, white sesame seed, ground ginger and hemp seed. 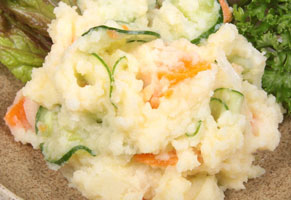 Most izakayas have potato salad, each offering its own rendition. I would say the biggest difference between Japanese potato salad and U.S.’s is mayonnaise. Japanese mayonnaise tastes more tangy and salty. 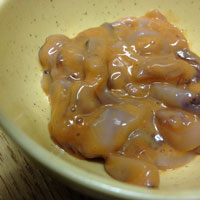 Eating this is a challenge for the most foreigners, even though Japanese love it. It is salted fermented squid guts. It has a chewy texture and a fishy and salty taste. The squid is thinly sliced so that you can eat just a little bit at a time. It’s popular dish to go with sake.

Toriaezu Nama: For now, draft beer. When you go to an izakaya, everyone tells the server “Toriaezu nama,” even before taking a look at the menu. Basically, you’re saying that you need a beer right now before you think about ordering food.

Toire wa doko desuka: Where is the bathroom?

Onaka Ippai desu: I am full

Mata kimasu: I will come back

Yokocho: Alleyway off the main street. This includes a bunch of the small izakaya that are found on these narrow streets.

How to cook Japanese-style potato salad (For 4 people)

4 famous Japanese rice dishes to cook up yourself