Every week, or so it seems, Tokyo’s famous kawaii central, Harajuku, releases a new, must-have snack meant to be both very cute and very photogenic. 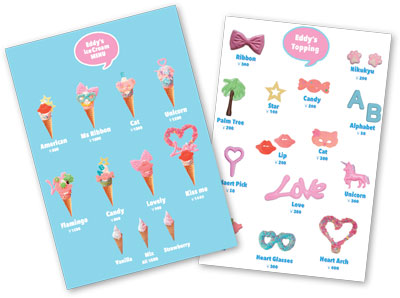 The list of Harajuku food fads just keeps growing: Pop ups often feature Hello Kitty pancakes, My Melody curry and My Little Pony ice cream parfaits. Near busy Takeshita Street, there’s a cookie shop serving up milk inside cookies baked to look like shot glasses; down the road, grab cotton candy spun into a cloud bigger than your head or take a turn down a side street for a stack of fluffy souffle pancakes deemed worthy of limited servings per day and of hours of waiting in line just to try to nab some.

Harajuku has a stuffed pretzel place, a rainbow grilled cheese spot, many boba tea stands and multiple dueling crepe places that serve up dozens of flavor combinations varying from savory sandwich crepes to the sweetest concoctions involving an entire slice of cheesecake and ice cream with crushed Oreos rolled into one crepe.

There’s no denying that from a place known for its funky fashion stores and kawaii culture, Harajuku’s food trends also make for some interesting accessories. 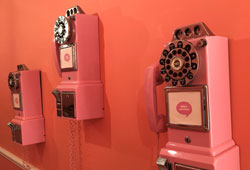 Since moving here, my taste for trying visually-appealing, cute foods has waned a bit. I’ve tried many and often end up disappointed. Plus, this habit for kawaii-only snacks tends to be pricey considering the taste is almost always mediocre and almost always overpriced.

Scrolling through Instagram one morning, snuggled in between a post about the latest Game of Thrones episode and the pictures of the birthday party my friend threw for her son, a sponsored ad summoned my attention. It was two awesome-looking ice cream cones topped with some chocolate decorations. One cone had Tokyo spelled out in white chocolate letters and a pastel pink heart. The other, the “American Cone,” featured a shortbread cookie set of red lips and yellow star cut-out chocolates. I HAD to go there.

My friend and I picked a rainy day to meet in Harajuku with the sole mission of snagging a mystical and super kawaii cone. It turned out that the dreary weather was the perfect time to visit as it meant no lines at Eddy Ice Cream shop and also meant I was that much closer to getting at least 30 likes on the Instagram photo I was planning to post before digging in.

The shop itself was tiny but cute with walls painted a festive Pepto Bismol pink and pop decorations, including old school non-working wall payphones. Preteens were posing in front of them with their ice cream for photos (But, before you snicker about preteens not knowing what pay phones are, know that in Japan, there are plenty of payphones still in commission).

However, I digress — know that since the space is small with only a few chairs, you might be stuck having your ice cream outside on the sidewalk. We were lucky and did not have to stand in the rain under umbrellas to enjoy our kawaii ice cream cones.

We approached the counter to check out the menu. Aside from 10 different themed ice cream cones, Edys also allows customers to customize their own creations. If you want to go that route, pay for a base soft serve ice cream flavor (vanilla, strawberry, or mixed) then customize the decorations and cone for around 200- 300 yen per cookie or chocolate piece. Cute, right? Not so fast! Edy’s ice cream cones will definitely cost you. Each range from 1,000 yen (around $9.00) to 1,800 yen. Customizing your cone instead can definitely put a deep dent in your wallet.

Normally I would’ve skipped on an ice cream cone this expensive, but we’d made the trek, so we decided to live our best lives. I went for the “Unicorn” because it was the most Harajuku one of the bunch and my friend went for the “American.” 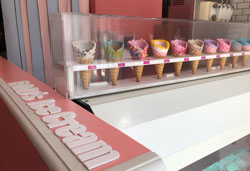 After a few minutes, our kawaii masterpieces were in our hands and, I admit, did look awesome. Others sitting around us on the counter turned to check out what we picked, and that seems to be the custom after every new customer entered and received their own cone – I call this move the “cone envy check.”

My unicorn cone came in a pastel-colored white chocolate-dipped cone. The strawberry-vanilla mixed soft serve base was covered with strawberry cotton candy pieces topped with a white chocolate heart and unicorn as the centerpieces of this pastel monstrosity I was about to consume. But first, some pix!

After I got my best shot, I dug in. The cotton candy was good, I guess. The unicorn and heart decorations weren’t special, just standard Wilmington chocolate melts mixed with food coloring then poured into cute molds.

And the ice cream? Your standard convenience store soft-serve. 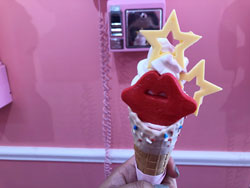 hough my friend’s cone wasn’t as cute as mine, the shortbread cookie lips had a nice taste. Everything else on his cone was similar to mine: not special.

Final verdict: cute but disappointing and not worth the diabetes I risked getting to try their ice cream. Super overrated.

I would say skip Edy’s if you’re looking for quality ice cream. It’s expensive and not worth the trouble. Head to the crepe shops instead, they have so many options, aren’t expensive, taste great and are a staple of the Harajuku area. Don’t let the hype drive you to make the same mistakes I made.

However, if you do plan on taking the whole family for these crazy cones, there are some cheap ways to still have the same effect by customizing the base cones with one or two cookies.