A new pop-up cafe in Tokyo will have Stranger Things fans running up that hill to get a glimpse inside the world of the smash hit show.

Stranger Pronto in Shibuya is a temporarily remodeled Pronto Cafe promising visitors a taste of the Upside Down.

For the unversed, Stranger Things is a Netflix horror/sci-fi series set in 1980s middle America featuring a telekinetic young girl and supernatural events.

The cafe opened five days after the release of part two of season four of the mega hit. The cafe is an official collaboration between Pronto Cafe— an Italian fast casual chain in Japan— and the streaming giant. 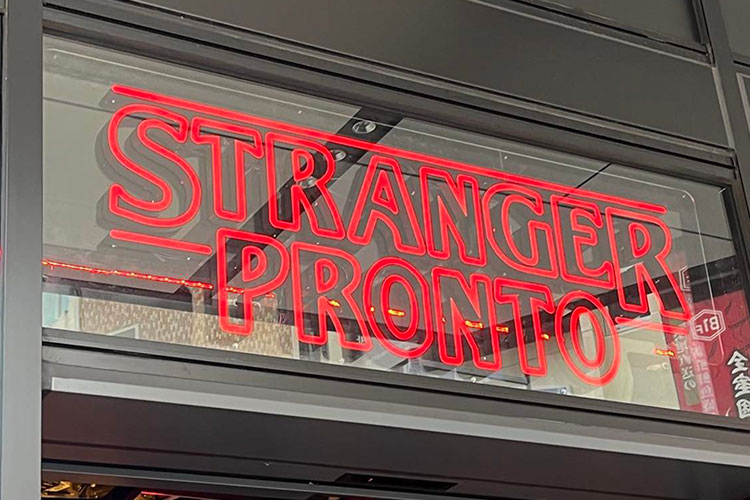 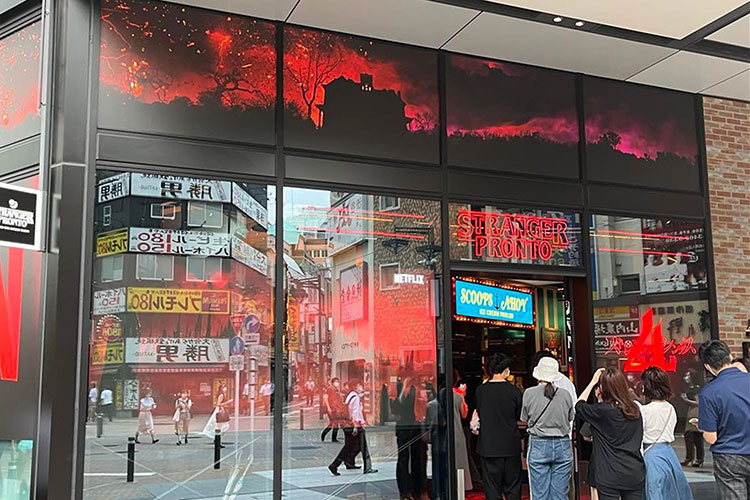 Stranger Pronto features a specialty menu with items like Eleven’s waffles and Demogorgon squid ink pasta with a gaping mouth of roast beef to look like the monsters from the show. The cafe also released seven themed non-alcoholic drinks. The immersive experience goes beyond the menu and is one of the most visually stunning and detailed themed pop-ups I have seen in Japan.

Often, themed pop-ups just change menu names, add a sticker to their drink cups, and hang up a couple of posters and call it a day. Stranger Pronto, however, goes the distance to impress fans. The shop is somewhat small but well-designed, including elaborate set pieces and photo booth areas. The lights even flicker every so often to warn guests that season 4 villain Vecna may be near. The staff are dressed in Scoops Ahoy and Surfer Boy Pizza uniforms as a nod to the fictional workplaces of teens in the show, and the soundtracks to all four seasons play throughout, a delightful blend of 80s rock and pop that enhances the experience. 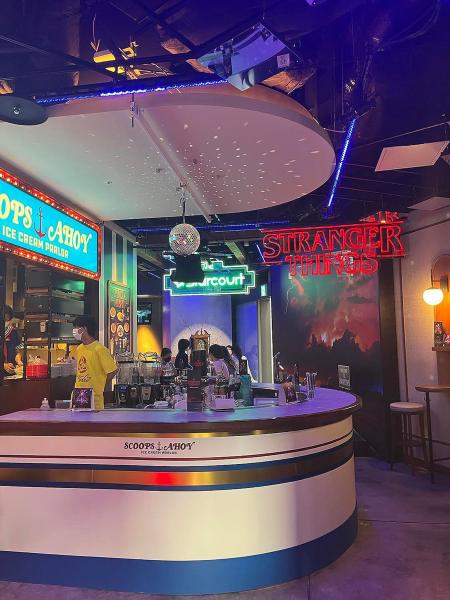 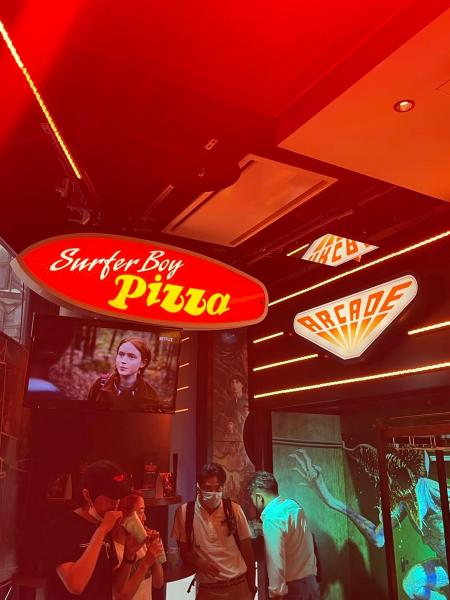 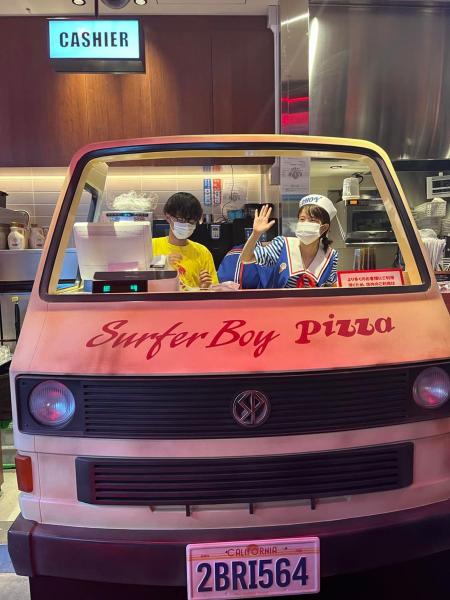 Several guests, including my friend and me, were dressed in 80s attire or like characters from the show.

To alleviate congestion, as of July 9, the café is now accepting online reservations. To reserve, timed slots are available online at midnight seven days in advance of the day you want to visit.  See the website below for more details.

When I visited the café still had in-person timed entry, so I was able to get a return ticket for 6 p.m. on the same day. By the time of my entry, however, most of the food items were unfortunately already sold out. Perhaps the new reservation system will mean you’ll be able to get your hands on a coveted waffle, burger or sundae to complete your experience.

Even with just sampling the drinks, I thought the visit was worth it and stayed for about two hours, which flew by taking photos and chatting with other guests about the show. The website warns however that time may be restricted to one hour on weekends and times prone to being more crowded. 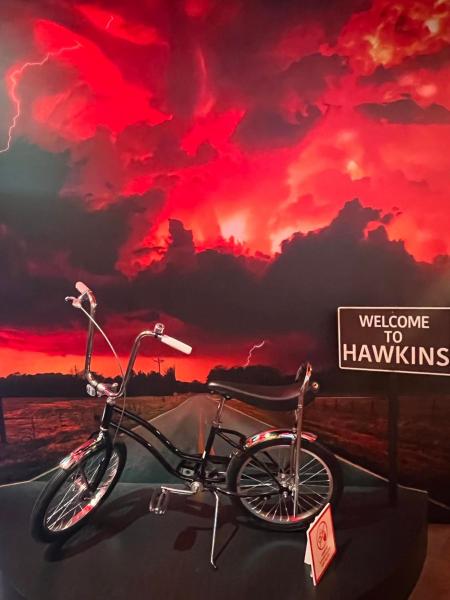 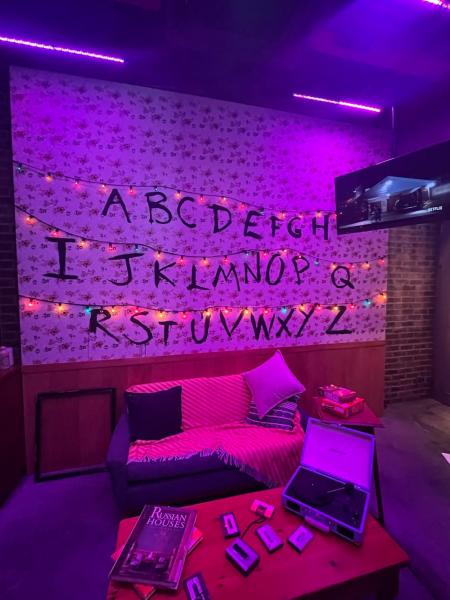 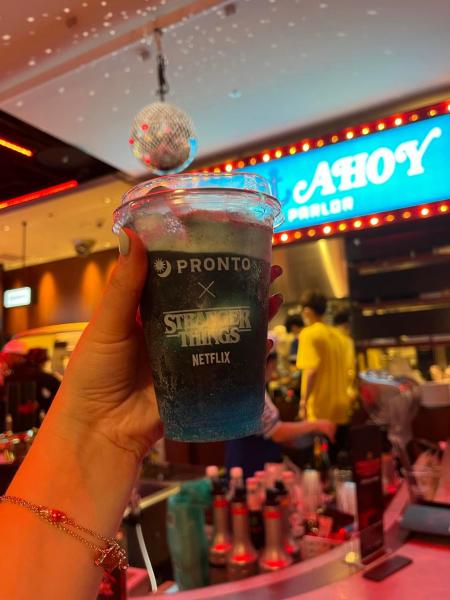 Despite being a cafe, the sparse seating and standing areas where patrons mix gives Stranger Pronto the feeling of a bar.

I had the Upside Down drink and Nancy’s Halloween Party Mocktail, and my friend had the popcorn caramel latte and the Dr. Alexei’s Blues, a sour cherry slushy (if you know, you know). My favorite was the Upside Down, a fruity cream soda.

The Pronto Cafe in the Shibuya Fukuras branch is the only one participating in the retheme, scheduled through Sept. 4, according to the shop’s website. During the pop-up’s run, only the specialty menu is available at this location.

After visiting the café, if you’re still craving a touch of Hawkins, Indiana, drop by the Stranger Things pop-up shop in the Parco department store in Ikebukuro before July 14 to check out their collection of Funko Pop dolls, posters, mugs and more.

All seasons of the Stranger Things series are available on Netflix and Netflix Japan. According to the streaming service, the latest season of Stranger Things is its second most streamed show on the platform, with over one billion hours of viewing worldwide. The Korean show Squid Game remains the top streamed program. 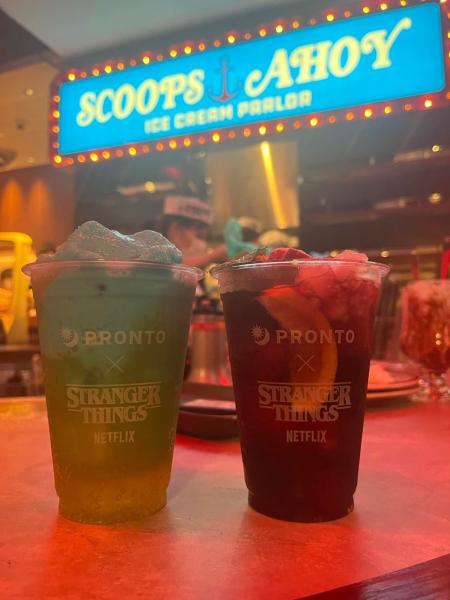