All You Need to Know About Kimchi

All You Need to Know About Kimchi

Kimchi is predicted to be one of the worldwide trends of 2020, according to Facebook’s 2020 Topics and Trends Report. The report mentions the current health-conscious attitude of Australia, and the digestive benefits of fermented foods such as kimchi on the gut. While kimchi is a staple of all Korean meals and is already well known among people with plans to visit Korea, there is always room for more knowledge! The best place to learn about this popular fermented food is at Museum Kimchikan, the first museum dedicated to this iconic dish. If you’d like to learn more about how it has changed over the years from one simple dish to having over 200 varieties, plan a trip here! 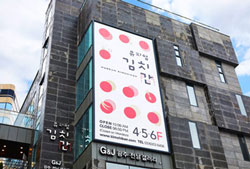 Museum Kimchikan, located in the center of the popular Insa-dong area, features many exhibitions and experiences to learn about kimchi, from the dish’s early beginnings to the UNESCO recognized culture of Kimjang. It is also the only museum in Korea to be included in CNN Travel’s article about 11 of the world’s top food museums. The museum starts from 4F and exhibitions flow naturally to 6F where the kimchikan kitchen is located. Visitors can freely explore the exhibitions using the barcode on their ticket, or request an audio guide device, available in English, Japanese, and Chinese, from the ticket booth to learn more. Guests should be aware that the Kimchi experience programs are only offered in English.

The origin of kimchi 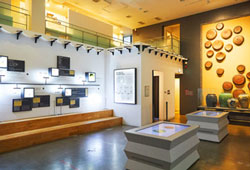 Kimchi is loved by people around the world, but few know the origins of this dish. Records show that kimchi started out like many simple fermented vegetable dishes in the 4th century. At that time, there was no way to store foods for a long period of time so vegetables were fermented as a way to enjoy the health benefits throughout the year.

By the 5th and 6th centuries, fermenting vegetables such as cabbage and radish was most commonly done using salt or soy sauce, and was referred to as jangajji. This type of salted vegetable with no seasoning was the standard up until the 12th century, when additional ingredients such as ginger, garlic, and onion were added, and kimchi began to separate into the two types of seasoned kimchi and water kimchi.

In the 15-16th centuries, jeotgal, or salted seafood, was added to the mix, creating what is known as seokkbakji kimchi. It may come as a surprise that the addition of gochu (Korean chili pepper) did not take place until the mid-Joseon era in the 17th and 18th centuries, when chili peppers were first brought to Korea. At that point, the seasoning began to be placed between each individual leaf of a whole cabbage, creating tongbaechu kimchi (whole cabbage kimchi) and bossam kimchi (wrapped kimchi), two of the most commonly eaten kimchi varieties in modern times.

The creation of kimchi 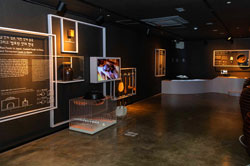 You can’t discuss the creation of kimchi without also mentioning the tools that were used to make this national dish. One such tool is the buddumak, a traditional cooking fireplace that helps separate Korea’s food culture from that of countries in Southeast Asia.

Buddumak was used for both cooking and heating the house through the use of ondol (traditional floor heating). However, because the stoves were made of clay or stones and had an open mouth, it was nearly impossible to maintain a very high temperature. Because of this, most Korean dishes require low heat or very short periods of high heat, leading to the necessity of fermented foods and dishes that could last for a long time without cooking.

The evolution of kimchi 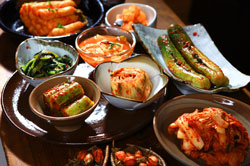 As mentioned before when discussing the origin of kimchi, there are many different ways to make this dish. It’s impossible to know the exact number, but there are records for over 300 unique types of kimchi! Each of these types is classified based on the region or season it is created, as well as the ingredients and presentation of the dish.

Each region has its own take on how to prepare the best kimchi. In the Seoul and Gyeonggi-do area, the kimchi is neither too salty nor too bland, and uses a lot of jeotgal in the seasoning. Most baechu kimchi (cabbage kimchi) served at restaurants is prepared in this style. In comparison, the Jeolla region, famous in Korea for their cuisine, prepares a kimchi that is both spicy and salty. Signature Jeolla region kimchi varieties include godeulppaegi kimchi (Korean daisy kimchi), gat kimchi (leaf mustard kimchi) of Haenam, and dongchimi (radish water kimchi) from Naju. Some regions with easy access to the ocean also include seafood in their kimchi. Some Gangwon-do kimchi types add gajami sikhae (spicy fermented flounder) or squid. The Chungcheon region adds jogi jeot (salted yellow corvina), hwangseogeo jeot (salted yellow croaker), or saeu jeot (salted shrimp) to their kimchi. 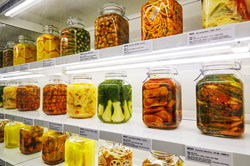 Museum Kimchikan has a unique exhibition space set within a temperature-controlled room similar to a walk-in refrigerator. The long white shelves are lined with glass jars, each filled with a different type of kimchi or fermented food from around the world. The space, known as the kimchium, references the space where kimchi was stored in the past.

The benefits of kimchi 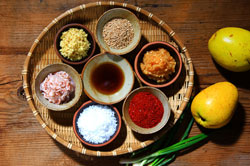 While there are hundreds of ways to make kimchi, most types will have the same basic ingredients. The standard seasonings for cabbage kimchi include salt, garlic, ginger, anchovy stock, saeu jeot, gochu garu (Korean chili pepper flakes), and chapssal pul (glutinous rice paste). Each of the ingredients has a special role in creating not only the flavor of the kimchi, but also in the fermentation, preservation, food hygiene and nutritional value of the dish.

Kimchi was listed as one of the 5 healthiest foods in the world according to Health Magazine, a US health publication. Kimchi has many beneficial bacteria that aid in digestion, including Leuconostoc, Lactobacillus, and Weissella. In addition, the gochu garu makes kimchi a great source of vitamin C.

The sharing of kimchi 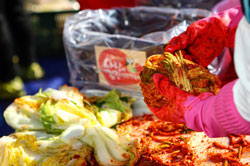 Kimjang refers to the time every year in late fall or early winter, when Korean families gather to make large amounts of kimchi, which they then share among relatives or people within their community. This traditional aspect of Korean culture has continued for generations, regardless of region and time. Kimjang allows the Korean people to feel a sense of belonging, as well as to put jeong, a Korean feeling of attachment and social collectiveness, into practice. These reasons and the creative use of natural ingredients helped kimjang become recognized as an Intangible Cultural Heritage of Humanity by UNESCO in 2013.

Tip - Make your own kimchi! 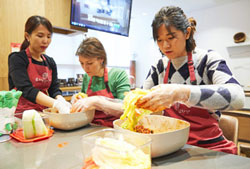 Museum Kimchikan operates kimchi making programs for international visitors, perfect for people wanting to get more hands-on knowledge. The program is operated in English, and participants can choose between making spicy baechu kimchi or the non-spicy baekkimchi (white kimchi). If you want the experience but don’t want to bring home a ton of kimchi, we recommend the DIY One-day Kimchi program. This program is not lead by a teacher, but instead includes an instruction guide, available in English, Japanese, or Chinese.

VIDEO| Spice up your life with some kimchi pancakes

How to eat with chopsticks properly in Japan