July 11 is Noodle Day in Japan! Now is there a single person on this planet who does not like noodles? While Japan is a country with a very rich rice culture, it does have a variety of different noodle delicacies that have been enjoyed by people since hundreds of years – the thick, tasty udon and soba made from buckwheat are just two of the most famous ones.

Besides those classic dishes, particularly Chinese noodles are an inherent part of Japanese cuisine. As such, it comes to no surprise that the island nation has a vivid variety of pasta deliciousness to offer!

In recent decades, noodle dishes from other countries overseas have also had an influence on Japanese menus and home cooking all around the country, creatively adapted and transformed to fit the unique tastes of the Japanese people. A large part of this influence comes from neighboring Asian nations.

But enough with the introductions, let’s dive right into Japan’s noodly variety and find out where all of its roots come from! 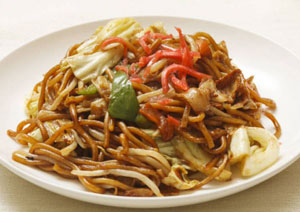 But where exactly does the idea come from to flavor the noodle dish with Worcestershire sauce? The origins of this are very hazy. One of the most prominent theories, however, names the black markets right after Second World War as the origins of Worcestershire sauce, while others are convinced that it has been used as a seasoning in an okonomiyaki restaurant near Asakusa before the war. As it could never be proven what kind of sauce this restaurant in question exactly used in their cooking, the truth about Worcestershire sauce’s origins in yakisoba still lies in the dark.

Nonetheless, there’s no other version of chow mein that uses Worcestershire sauce as a main seasoning besides Japanese sauce yakisoba. Chow mein itself, by the way, boasts an amazing history of 4,000 years! By now, sauce yakisoba is an inherent part of Japanese cuisine with a large variety of regional and seasonal differences – go try them all! 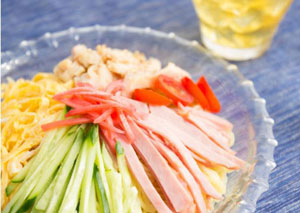 Next to sauce yakisoba, there’s another dish that is very representative of Japanese noodle dishes and beloved all around the country: hiyashi chuka, or cold ramen. Particularly amazing during Japan’s hot summer months, this delicacy will chill you to the bone – in a very pleasant way. This time, its origins aren’t hazy at all.

Therefore, Ryutei started a trial menu of noodle dishes that people would enjoy even during the hot summer months. An abundance of vegetables were hoped to fight summer fatigue and a slight sour flavor was added to invoke the appetite of guests. After much trial and error, cold ramen were born. To put it simply: cold ramen is a dish that was created to combat the intense Japanese summer heat!

Today, it is common to see signs saying “Cold ramen now on the menu!” at Chinese restaurants all around Japan at the beginning of summer. It’s by no means an exaggeration to say that “hiyashi chuka” has become both one of Japan’s seasonal words as well as one of the dishes that every Japanese person is familiar with.

3. Champon: a Dish Created for Exchange Students from China 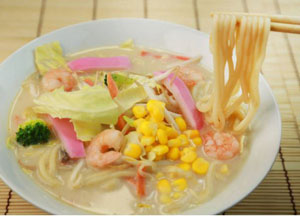 Champon is a local noodle dish from Nagasaki that also has its roots in authentic Chinese cuisine. The term “champon” means “mixing all kinds of things” and can be traced back to the Edo period (1603 - 1868), and there also is a theory that sees a common etymology of the Okinawan dish called Champloo.

The first Champon dish was created in the Meiji period (1868 - 1912) by the owner of the Chinese restaurant “Shikairo,” located in the city of Nagasaki. He wanted to make a dish that is both cheap and nutritious for the many students from China living in Nagasaki, and it is said that the inspiration for Champon was another noodle dish from Fujian Province called menmian.

One of the most prominent of Champon’s characteristics is the use of thick noodles made with Nagasaki’s distinctive brine called toaku. They are boiled in a broth infused with ten different ingredients, based on chicken and pork bones.

The delicious taste of Champon doesn’t only keep on attracting Chinese exchange students but also Japanese people from Nagasaki, Kyushu, and all over Japan. It is also said to have a strong influence on other regional noodle dishes of Kyushu. Another Kyushu specialty, its famous pork bone broth ramen, is said to have derived from Champon as well.

4. Sara Udon: Born out of Convenience 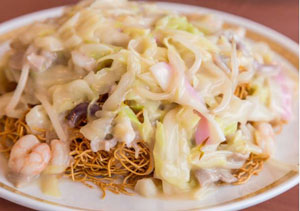 The founder of the aforementioned restaurant Shikairo didn’t only invent Champon but also another extremely delicious noodle dish based on Chinese cuisine: Sara Udon, or literally plate udon. It is based on a Chinese noodle dish that uses fried noodles and chicken meat and inspired by the arrangement to keep Champon’s soup from spilling when serving.

When chow mein came to Japan later on, a variation of the dish sprung up using crisply fried thin noodles instead. Nowadays, this version of Sara Udon seems to be much more commonly known around Japan and even if you order the dish in Nagasaki now, it is very likely that you’ll be served the crispy version if you don’t specify that you’d like to eat the original.

One place where thick noodles are still the standard for Sara Udon is the city of Sasebo. But if you’re in Nagasaki, got hungry from all the sightseeing and decide to try the classic Sara Udon dish, make sure to check beforehand what kind of version the restaurant of your choice serves!

5. Morioka Cold Noodles: An Iwate Specialty (After Much Trial and Error!) 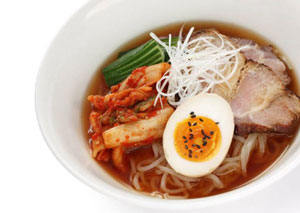 Morioka Cold Noodles, or Morioka reimen as the dish is called in Japanese, are a famous specialty of the same-named city of Morioka in Iwate Prefecture. They were created by Aki Teruhito who came to Japan from North Korea in his early childhood and later founded his restaurant called “Shokudoen” in Morioka in 1954. In an effort to recreate the cold noodles that he used to eat in North Korea as a child, he came up with the noodle dish that is now known and loved as Morioka Cold Noodles.

Made from ingredients such as flour and potato starch, the noodles for this chilled dish are made by pushing the dough through holes that have been adjusted according to the desired thickness of the finished noodles – a lot of strength is required for this! You can freely top your bowl with kimchi, adjusting the spiciness to your liking, and the rich and flavorful soup is made out of beef bone. Created on the “three elements of the taste of home,” it took quite a bit of trial and error until the final version of Morioka Cold Noodles was born, perfectly adjusted to the taste of the Japanese population – the end result is incredibly amazing, though.

By the way: at the time of their creation, the name of this dish was Pyongyang Cold Noodles but when the Nippon Men Summit (the Japan Noodle Summit) was held in Morioka in 1986, this noodle dish specialty participated and became known as a specialty from Morioka. The name Morioka Cold Noodles started to spread as a restaurant called “Pyon Pyon Sha” opened the year after the summit.

Are you hungry yet? It is evident that many of Japan’s most beloved noodle dishes have their roots in all kinds of countries but were tweaked, adapted, and refined in their very own unique way, becoming representative specialties with a lot of seasonal and regional nuances. And the love for Japanese noodle dishes just keeps on rising, in Japan as well as abroad!

Taste of Japan: The incredible world of Japanese regional dishes

Taste of Japan: Know when, how to slurp noodles

Take a food tour in Makishi Market, the Kitchen of Okinawa