This has been a trying year in many ways, but one bright spot has been all the specialty tastes that have been released for our favorite Japanese snacks and treats! We underwent a taste test of them all to give you an idea of what they taste like! 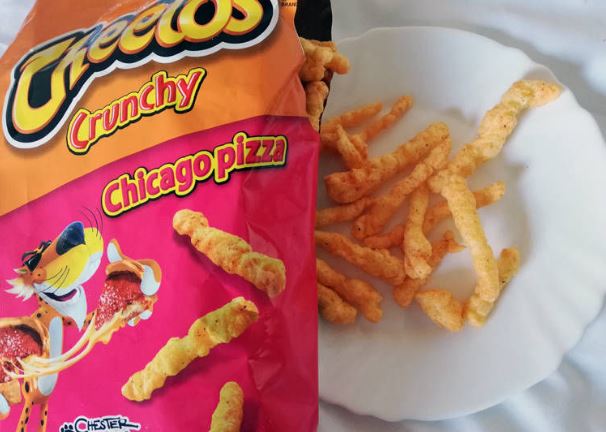 We know that Cheetos are originally an American snack, but Japan has made them their own. They regularly release special, Japan-specific flavors that you can't find anywhere else. Currently, you can find Chicago Pizza, Prosciutto and Cream Cheese, and Spicy Chicken Wings Cheetos sitting on the shelves of the supermarket.

Over the past few years, Chicago-style pizza has been seeing more and more popularity in Japan, so it's not surprising that snack manufacturers picked it up too! The Chicago Pizza flavor has a pleasantly mild cheesy flavor and a cheesy, slightly spicy aroma to it. The overpowering taste however comes from the pizza base – tomato. There is also a definite hint of pepperoni. Certainly makes a yummy snack. We have our eye on the Spicy Chicken Wings variety to try next time! 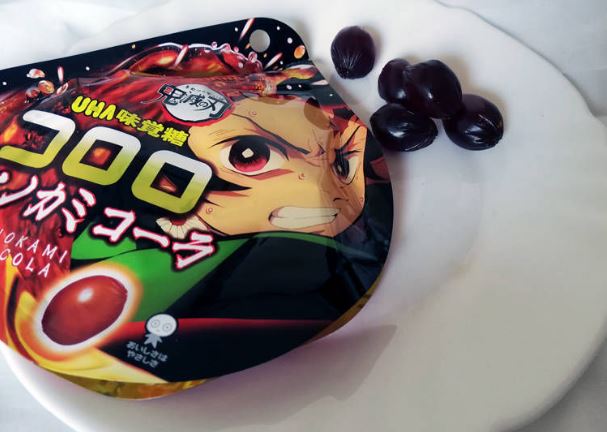 Kororo gummies are made with real fruit juice and are said to have a very unique texture. According to Japan Crate, they are very divisive, with people either loving them or not for the texture alone! Right now, Demon Slayer (Kimetsu no Yaiba) is one of the biggest hit movies of 2020, and so we thought it was only right to try the limited edition Demon Slayer Hinokami Cola flavor.

Immediately upon touching the candy, it's easy to see how the texture baffles people. It is soft on the outside but seems to have a firm inside. Then when you bite into it, it's actually soft, with a sort of waxy layer on the outside. The taste itself is a nice and tasty cola flavor, but what makes these unique is definitely the texture – if you try it, you'll understand! 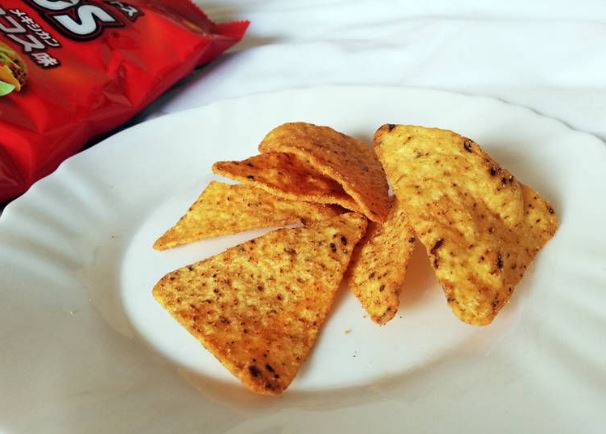 Like the Cheetos, Doritos are another American snack that made our list. Doritos came to Japan in 1987, over 20 years after the U.S., but they quickly made the chip their own, producing some exciting flavors that we're surprised haven't become a thing abroad too. 2020 has given us Wasabi, Avocado and Cheese, and Taco flavors to enjoy.

We tried the Taco flavor and we have to say, we come across people all the time who are looking for good Mexican food in Japan – we should simply refer them to these chips! They are both delicious and authentically "taco" tasting. It might not be quite actual Mexican food, but these Doritos are pretty good all the same. If you're after a mouthwatering snack packed full of flavor, we recommend these Taco Doritos. 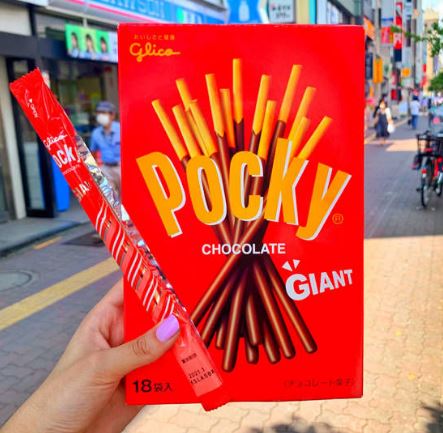 Pocky is a ubiquitous Japanese snack, first introduced in 1966. People like them as they are both sweet and savory and not too much of either. Like other snacks, their flavors are numerous, such as the unique Almond Crush, Creamy Vanilla, and Heart-Shaped Strawberry. Did you know that you can also buy GIANT Pocky? It's like a regular Pocky, only much bigger – double the taste bud pleasure! They come in Sweet Potato, Chocolate, and Strawberry flavors.

After giving these a taste, we can tell you that they taste just like regular Pocky, only significantly thicker. This makes them much more satisfying and you really get a decent helping of chocolate along with the pretzel. 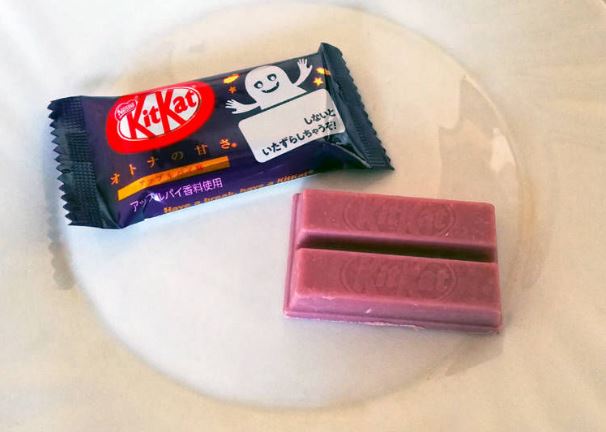 Despite originally being a British invention, KitKat is probably most famous in Japan, where their hundreds of special flavors serve as the perfect souvenir for those completing their Japan voyage. This year, they released an Apple Pie flavor, which we just had to try, being lovers of all things apple (and chocolate for that matter).

Surprisingly, the chocolate was purple – not what you would expect for something that's supposed to taste like apple pie. The aroma, however, really did smell like a mouthwateringly sweet baked apple. It tastes like apple pie indeed, with strong undertones of cinnamon. We highly recommend these Apple Pie KitKat; they're definitely a "hit." 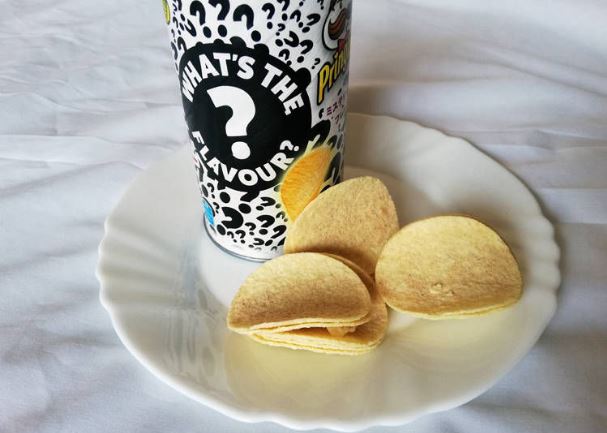 Another American chip brand, Pringles are famous all over the world. Although partial to the sour cream and onion flavor, we couldn't resist trying the latest taste released in Japan, the "Mystery Pringles." The flavor is not specified on the tube, so we had no idea what to expect—which is half the fun!

With trepidation, praying we weren't going to be eating "natto" flavored chips, we slowly took a chip. Appearance-wise they look to be covered in pepper, however the taste was nothing of the sort. We'll say no more as we don't want to spoil the surprise, but rest assured that they are quite appetizing! 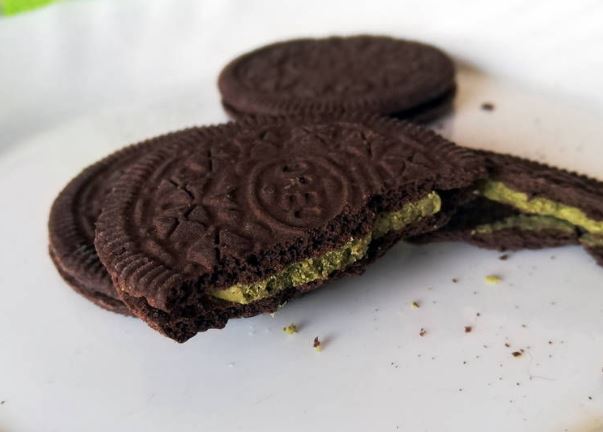 If there is any flavor that simply screams "Japan," it is matcha, or green tea. Therefore it is no surprise that a special edition version of the classic Oreo has been released, featuring "matcha roll cake" on a thin crispy cookie. Made with real green tea powder, the taste is said to be authentic to the real Japanese matcha.

Upon tasting these cookies, we were surprised at just how strong the green tea taste is. They're definitely much less sweet than regular Oreos, and both the biscuit and the cream are thinner. If you are a fan of matcha, you'll definitely love these, even if you don't usually go for Oreos. 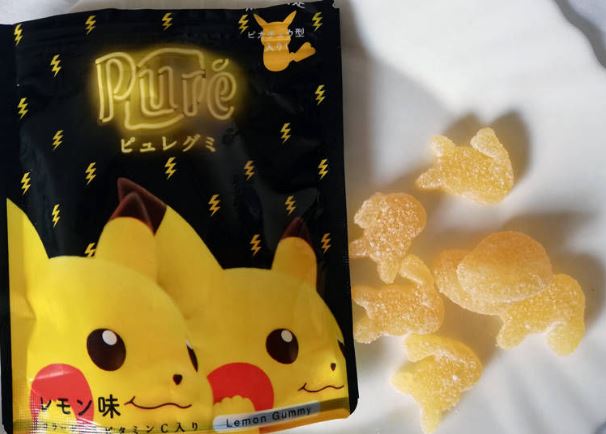 Gummy candy seems to be very popular in Japan. In any convenience store or supermarket, you can find many different tastes and brands. Of course, like everything else in Japan, they have limited edition seasonal varieties. These special Pokemon inspired Pikachu gummies caught our eye, because who doesn't love Pikachu?

The candy inside is shaped like Pikachu and is covered in a tangy sugar coating. It tastes strongly like lemon, with that nice sour kick to it. Basically these are regular lemon sour gummy candies that happen to be shaped like Pikachu, making them that much cooler than the average gummy. If you like Pokemon and lemon, definitely give these a go. 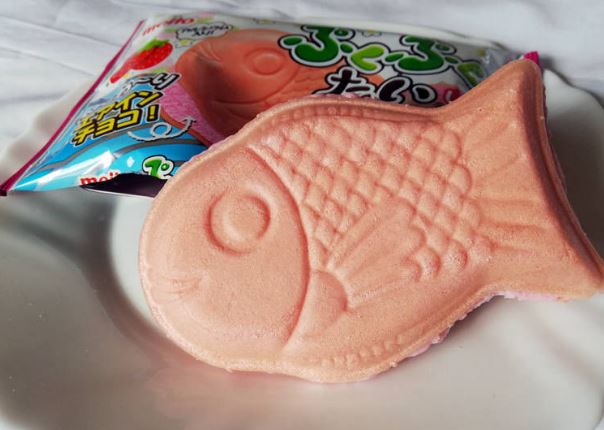 Puku Puku Taiyaki are retro, fish-shaped sweets with an outside biscuit similar to an ice cream cone and a crispy flavored inside. They are said to be a nice and light snack which aren't too sweet. This year, we found Watermelon, Double Berry Chocolate, and Strawberry tastes.

We tried the Strawberry flavor and were pleasantly surprised by how nice it was! Really light while still being sweet. The wafer on the outside is crisp and simple but tasty. The strawberry-flavored inside almost dissolves the second it enters your mouth, giving true meaning to the phrase "melt in your mouth." Together, they make an amazing combination! 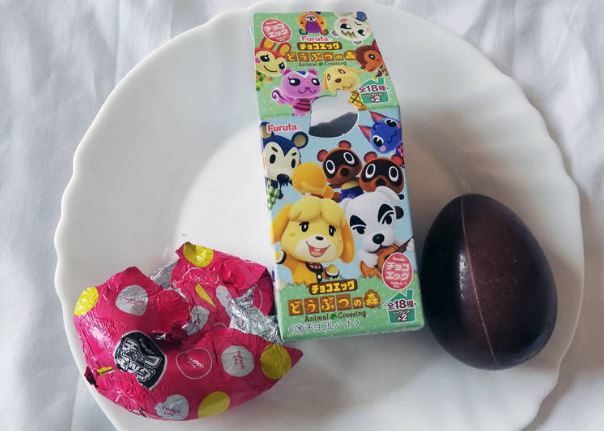 Furuta produces a range of chocolate eggs made with rich and creamy Hokkaido milk. Each egg has a small toy inside, similar to a Kinder Surprise. Japan Crate recommended the Animal Crossing and Pokemon editions to us, promising they are all the rage right now.

Inside the Animal Crossing box was a chocolate the size of an egg, with milk chocolate on the outside and white chocolate on the inside. The shell was nice and crisp, and the chocolate was sufficiently milky. One could see themselves getting addicted to these easily. The toy was an added bonus, in our case, a dog named Caramel. Definitely not for small kids as it is quite a choking hazard.

While some of these snacks are seasonally or promotionally limited, if you wish to try them for yourself, you can most likely find them at most supermarkets, convenience stores, and snack shops. Japan Crate also offers them all. Past crates have included the Apple Pie KitKat flavors, the Pikachu gummies, the Puku Puku Taiyaki, the Wasabi Doritos, and the Demon Slayer Kororo. We wonder what will be inside the next crate!

Give Japan’s chocolate snacks a try!

The quest for the best Autumn conbini snacks in Japan