This year marked the second year of a popular virtual event organized by Sullivans Elementary for the children of CFAY (Command Fleet Activities Yokosuka) called Goodnight School. As the organizer of the event, I wanted to share a first-hand experience. The event was conceived four years ago at Fort Jackson, SC, where I worked as a teacher. As one of the original organizers for the event, I decided to take it with me when I PCS'd to Japan.

Goodnight School is a much-anticipated event that consists of five mystery readers who read bedtime stories for children live on Facebook. The event takes place over Read Across America week, an event created by the National Educators Association. Read Across America typically is celebrated the first week of March.

Goodnight School was conceived to promote literacy at home and involves the participation of Sullivans' school staff as well as members from the community. This year, five educators, a sailor, and world-famous illustrator Jane Chapman participated in the event. 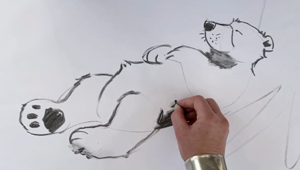 Mr. Jack Childs, a special education teacher at the Sullivans, kicked off the event with Cece Bell's hilarious picture book, I Yam a Donkey. "Reading can be boring or exciting," stated Mr. Childs. "When you read stories with expression and intonation, reading becomes exciting. I hope I was able to do that when reading I Yam a Donkey. It was my distinct honor to read this story to our military-connected students at the Sullivans school."

"I love reading to children, and it is a wonderful opportunity to bring in social skills with a fun story. My book taught the lesson of putting yourself into others' shoes. Kids can relate to that, "stated Lori Hovell, an ESOL (English as a Second Language) specialist at the Sullivans, who was the second Mystery Reader. She read the book, Hey Little Ant by Hannah and Philip Hoose.

Ms. Victoria Kwiatkowski, the school librarian, read The Book with No Pictures by BJ Novak. She stated "I have been consistently impressed with the Sullivans school sticking together through this past year. Goodnight School was another great way to connect the community even while having to remain distant."

For the fourth evening, I was invited to board the USS Milius for our live read. The mystery reader was LTJG Salvatore Borgognone. He read the book Pirate's Perfect Pet live from the ship's pilot house. LTJG Borgognone shared that "reading for Sullivans was a career highlight because military families sacrifice so much for the force. They deserve the attention of ships and sailors." He continued, "I was happy to do my part and contribute via Goodnight School."

Children were delighted to see their teacher, myself, and LTJG Borgongnone joining them live from a real ship. Some even commented that it was their parent's ship. As the daughter of a sailor, I was thrilled to have the opportunity to board a functioning Navy ship for the first time. I am so grateful for the hospitality the sailors of the Milius offered. I enjoyed this experience as much as my students!

The last reader was Ms. Cheryl Wyndham, a first-grade teacher at the Sullivans. She read Bear Snores On and was later joined virtually by world-renowned illustrator, Jane Chapman who shared how she drew one of the book's characters. Due to the time difference, the illustrator submitted a prerecorded video.

Players set to take to the courts, courses again this fall