Twas not the night before Christmas, but it was well before dawn, when a truck-load of gifts and four vans-loads of helpers left the Yokota Base West Gate to celebrate a holiday ritual December 6th. For the seventh straight year, this convoy headed south to Kanagawa Children’s Medical Center where many good boys and girls were struggling with life-threatening illnesses and birth defects. At the trip’s end were children from infant to about age 17 who were receiving care for cancer, cardiovascular problems, and congenital illnesses. Since many patients were tethered by bandages, breathing tubes, or intravenous drips, this party was coming to them. 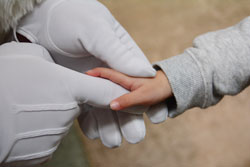 On this special day, volunteers from throughout the Kanto Plain would join the Yokota Sons of Hawaii Club to create a colorful fantasy to chase away the nightmare that illness often brings. 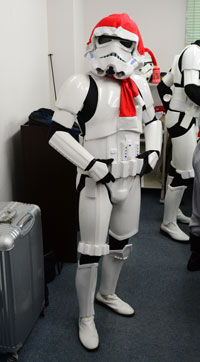 Then there were the reindeer and elves, many of whom were taken from the ranks of young civil engineers at Yokota. They added splashes of green and brown to the moving party as well as helpful hands. In the lobby, an elf trio played island tunes that included a hula performance for the benefit of outpatients. Navy blue and Army green also arrived in two gleaming brass quintets to play holiday favorites such as Rudolf the Red-nose Reindeer and Jingle Bells. These members of the 7th Fleet Shonan Brass Quintet and the USARJ Band of the Pacific Brass Quintet integrated seamlessly to provide quality carols not only in the lobby, but in the cafeteria and in staff areas where workers were anchored to constant administrative tasks. Event organizer Fern Fields said having both branches play together was a first, and the show of fraternity was as impressive as … well … six-foot stormtroopers sauntering down the corridor.

Track and Field: Humphreys runs past the competition