Editor’s note: This is an updated version of a story originally published in Stars and Stripes on Oct. 28, 2015.

Desperately brushing away a spider web, I wondered where the trail went. This isn’t a place where we’d want to get lost.

We’d entered this untamed forest by a path created not by the park service but worn into the ground by the footsteps of those who went in before us — some of whom never came out.

Were there ghosts still restless with the angst that led them to flee Tokyo’s skyscrapers and end their lives amid the twisted trees, volcanic rock and moss in this empty, sprawling forest? Was that fragment of fraying rope tied around a tree the remainder of a noose? A place like this elicits many questions, many of which will never be answered.

To the people of Japan, this is Aokigahara Jukai. To everyone else, this dark place has a dark moniker to match: “Suicide Forest.”

Dozens of Japanese nationals enter this entanglement at the northwest foot of Mount Fuji every year with the intention of ending their lives. Rumors of hanging corpses, skulls and suicide notes swirl online. Volunteers reportedly make regular sweeps to clear out bodies discovered by others.

Installing physical barriers to bar access to the 9,000 acre-plus sprawl is out of the question, officials said. Instead, six people are assigned to suicide prevention patrol 365 days a year.

Local officials and residents worry that the forest’s bad rap is feeding off itself.

“The publicity that Aokigahara has gotten in the past as a suicide spot has created a wrong image of the forest,” said Yoshihiko Maruyama, a spokesman for the Yamanashi Prefectural Police said in 2015. “That has ended up attracting people who have suicidal thoughts to the forest.”

Though officials did not have recent numbers, data from the prefecture’s Mental Health and Welfare Center showed a growing trend. Starting in 2006, reports of both attempted and fatal suicides swelled from 115 to 195 in 2009.

Why people commit suicide varies, but the reason they choose to do it here is credited to a couple of Japanese books, “The Complete Manual of Suicide” and a novel titled “Tower of Waves.” The novel, according to the Japan Times, ends with a romanticized scene in which the heroine kills herself in the forest.

Two Hollywood flicks released in 2015, “The Forest” and Gus Van Sant’s mystery “Sea of Trees,” took advantage of the forest’s disturbing history to spook audiences. And Aokigahara gained even more publicity in 2018 when YouTuber Logan Paul, on a tour in Japan, made a visit to the forest and filmed a corpse he and his friends found. Many decried Paul’s video and his disrespect of the deceased person and surviving family.

If you go into Aokigahara, Ken Fujita of the Yamanashi Prefectural Police said not to touch any belongings or remains and to instead call 110 or the Fuji Yoshida Police Station. And, while hiking in the area is relatively safe, Fujita said via an Oct.15 email to Stripes Japan, he also cautioned against straying from the trails.

“If you go off track, you might get caught in hardened lava or tree roots, get injured or you might lose your sense of direction,” Fujita added.

Even without the reputation, the place is, well, spooky. Stringy trees, looking almost tortured, reach toward the heavens from the hilly terrain. Spider webs grip the crooked branches.

Compasses are rumored to fail here due to the high magnetic charge released from the volcanic rock covering the forest floor. Though my tour group wasn’t able to test this theory, Maruyama said it is a misconception.

Many rely instead on colored tapes and strings to help retrace footsteps in case they get lost or change their minds. Debris from the homemade markers zigzags around moss and trees all over the forest floor. A recent documentary followed some of those strings and found empty campsites, speculating that the people who stayed there had changed their minds. Other strings led to remains. 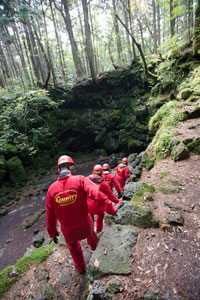 Before diving into the “sea of trees,” our trip started with a less-known, less-scary side of Aokigahara: a guided tour for some spelunking in one of the forest’s many caves.

The tour highlighted a young forest that sprouted from Mount Fuji’s volcanic ash and lava. The caves formed from Fuji’s eruptions — the last about 700 years ago — are popular for tourists and locals alike.

Pon, our guide from adventure company Country Lake Systems, wanted to know: What did we know about the forest?

A woman in our group of eight raised her hand and said “suicide” in Japanese. Pon nodded, adding that while the tour was popular because of the forest’s gloomy reputation, this part was more remote than the area just off a busy road where people went to die. He hoped it would give us a different impression.

As we walked the trail, a forest worthy of a fairy tale surrounded us. This side of Aokigahara was enchanting, not disturbing.

Deep green moss carpeted tree trunks, and wild mushrooms of all shapes and sizes were sprinkled here and there. The lava flow of yesteryear remained untouched under our feet. It would be easy to imagine a princess daydreaming of her Prince Charming under a tree — or a T. rex bursting through the brush on the hunt for his next meal.

An ice cave, marked only by a concrete slab with Kanji characters, was our destination. We approached what can only be described as a hole in the ground draped in moss and ivy. With our helmets secured and headlamps on, we made the slow descent down a handmade bamboo ladder into the cold, dark abyss that makes up the bowels of the Suicide Forest.

We crawled over and squeezed between boulders, our helmets banging into the low ceiling a few times. Through flashes of light, I could see my breath and soon spied a bat silently fly past me. Claustrophobes, steer clear!

After a few minutes of bouldering, we hit ice. I awkwardly shuffled on what Pon said was a frozen lake at the bottom of the cave and entered a wonderland of icicles. 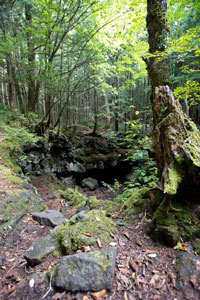 After taking a few photos, we were instructed to turn off our headlamps for a taste of complete and utter darkness. Our group grew quiet as the last light went out. My nerves made my throat dry, but our lights were back on soon enough.

We then crawled back up to the warmth of Aokigahara — the irony that a place so emotionally cold could be so warm only became obvious later.

We eagerly jumped in our car and headed back to the forest — this time to the part that lives in infamy. We stood for a moment in the same parking lot I saw in the documentary, where dust-coated cars — allegedly abandoned by their suicidal owners — sit for weeks at a time.

We stepped into the “sea of trees” without Pon to protect us. We pushed past the Japanese billboards aimed not at morbidly curious thrill-seekers like us but at those with dark thoughts and heavy souls. On we marched, past one pleading with the reader to think twice about the life their parents gave them and past another about debt being repayable. Both offered the same suicide hotline number.

The thin trail curved a foot into the forest beside a two-lane road heavy with late afternoon traffic. We were alone despite a half-full parking lot that left us wondering how many cars belonged to people who might not be returning ever again.

By my phone’s calculations, we were only three miles from where Pon had taken us, yet, in this Aokigahara, we were worlds apart. The low branches of sagging trees stretched in our way, seemingly trying to block us from going further. Soon the trail ended, as though the forest was trying to get us to turn around. We looked at each other to see who would lose their nerve.

None of us did. 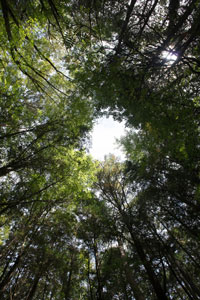 Off the trail, we tramped into the forest, the wonders and enchantment from Pon’s Aokigahara fading into unease. Each step in the soft ground made me more nervous. I felt like we were breaking some unspoken rule by intruding. I felt a million eyes on my back, but when I turned, no one was there.

This forest was messy. Rotting tree trunks covered the floor, breeding grounds for pockets of moss, trash and more mushrooms. Looking back, we spotted a few trunks marked with bright orange tape, but the markers didn’t lead anywhere obvious.

A few steps later, we spotted a plastic string tied at the base of a trunk that led deeper into the forest. We followed until it vanished into thick moss in a small valley.

This was where we called it quits. We made our way back to the trail with a disturbing sense of disappointment. In retrospect, I probably would have fainted at the sight of another person in there, dead or alive.

As we neared the road and once again could hear traffic whizzing by, we had to double back to find the trail. I tried my best to avoid more webs and ended up behind a tree where I spotted a sneaker in a pile of leaves.

Food containers were also strewn about, but the sneaker stood out.

As we stood there staring, we noticed a rope with its end severed on a tree above us.

“This looks like a noose,” one of us said. My eyes had begun to tear from the blinking I had apparently forgotten to do.

There was some debate as to what happened to the owner of the shoe, the person who had gone to so much trouble to put up the rope or whoever left the string that was being swallowed up by the forest.

In here, discarded food containers, wrappers and bags go beyond being everyday litter. They become artifacts that someone with morbid curiosity sees as clues into a possible death.

“Was this someone’s last meal?” I thought as I kicked foliage and empty Cup Noodles packaging out of the way. That’s the thing about Aokigahara — you never know.

Soon after, we found the hidden trail and made our way back to the safety of the car. As we crossed the busy highway, a small truck with a prefecture logo on the door left the parking lot — perhaps marking the suicide patrol shift change, or perhaps we were being watched.

Our attention quickly turned to the arrival of a tour bus and the group it unleashed on the real hiking trail.

Aokigahara is an untamed forest of secrets that draws both the weekend warrior and the broken spirit. It is a paradox that may only frustrate local residents more with the surge in “corpse-hunting” visitors.

Unfortunately for them and the ill-fated forest, it isn’t likely to change anytime soon.

Did you know?: Mt. Fuji is actually an active volcano