YOKOTA AB -- If you went to the Samurai Fitness Center in Yokota this past Sunday, you may have noticed quite a commotion coming from the basketball courts. Noises included the skidding of toe stops, the crashing of pads and helmets, penalty whistles, and of course the yelling of “5 SECONDS!”
Don’t be alarmed Yokota, it’s just the monthly Roller Derby Scrimmage between Camp Zama’s Killer Katanas, Yokosuka’s Sushi Rollers, and Yokota’s own Fuji Flatliners.
The local derby teams were also lucky enough to be joined by current and former professional skaters from Team Tokyo. Daisaku Tashirocchi, former head coach of Women’s Roller Derby Team Japan and Captain of Men’s Roller Derby Team Japan, famously starts each scrimmage with a dancing skate warm-up. Once the skaters loosened up, they received in-depth instruction on roller derby’s most common penalties and how to avoid them. Bethany Dickerson, a 9-year roller derby veteran, gave the teams a thorough refresher before the skaters divided up and began to scrimmage. 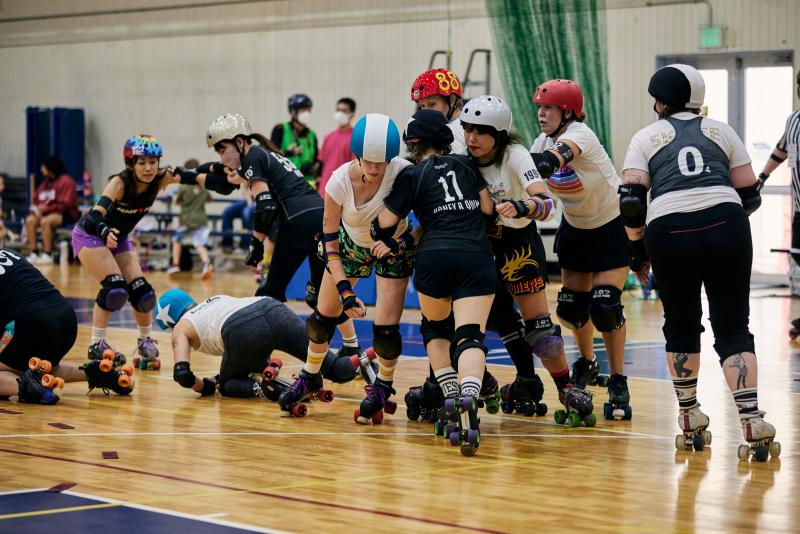 For anyone unfamiliar with the sport, here are the basics: two teams each have 5 players on the track at a time. The object is for the jammer (with a star helmet) to lap and pass the four blockers of the other team. The blocker’s job is to keep the opposing jammer from earning points by stopping them from passing. A game, or bout, is divided into two 30-minute periods, made up of 2-minute jams.
The skaters had a spirited bout with lots of knowledge being passed around from experienced players. Several skaters also learned the ins and outs of refereeing and staffing the penalty box, which is a necessity for any respectable roller derby game. Hannah Howard, roller derby veteran and Fuji Flatliner Head Coach, hosted a fantastic event bringing skaters from all over the peninsula together. The future of roller derby is looking bright on the Kanto Plain as everyone looks forward to the next scrimmage. 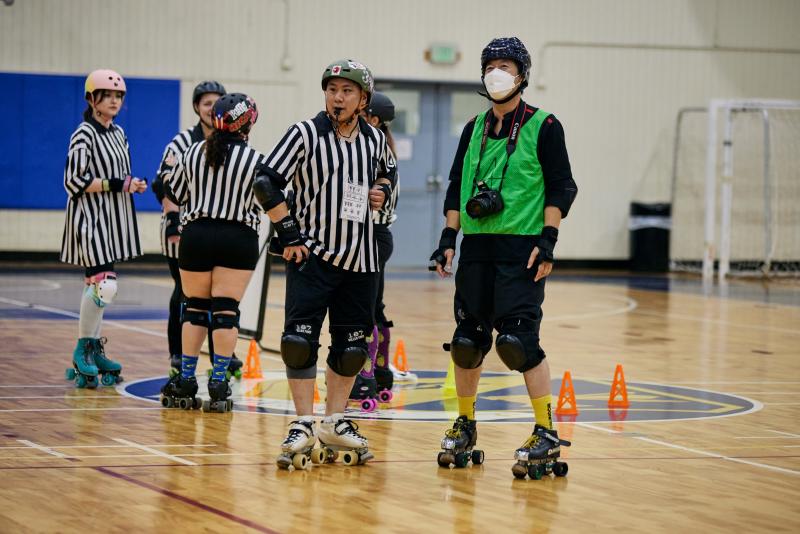 The Spirit Behind the Games