Just like in the States, the holiday season is the most cheerful - and busiest - in Japan. With endless bonenkai celebrations heralding the season in the beginning of December, the party doesn’t end until early the following year. Throw in countless lights, gifts and greeting cards, and The Land of the Rising Sun sure does finish the year with a flurry. Despite the busy schedule, the holidays bring a lot of joy; here are a few of my favorite traditions of the season.

Winter Illuminations
There is nothing more heartwarming than winter illuminations to promote holiday spirit in Japan. From the end of November to Christmas day or throughout the winter, elaborate and colorful light displays throughout the nation amaze with dazzling brilliance. In addition to promoting the holiday spirit, there are more practical reasons for winter illuminations in Japan. There are less daylight hours, the air is becoming drier and clearer, the temperature difference between day and night decreases – are all factors that enhance the illuminations viewing. Check out event listings at Stripes Japan and Okinawa find illumination attractions near you! 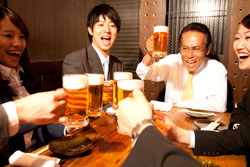 The arrival of the holiday season at the end of November reminds me of Bonenkai – a traditional Japanese year-end party. The party is more of a Japanese ritual, dating back hundreds of years, and is considered as one of the most important parties of the year. bonenkai can be enjoyed with anyone, but typically is done so with coworkers. We can see well-trained entertainment at work-arranged party where we often wear neckties on our heads to show how much we are enjoying or into the party. I’ll usually enjoy bonenkai with at least five or six groups every year. It always provides a good reunion opportunity for friends who many not see each other as often as they’d like, as well. For many of us, the month of December means unlimited bonenkai.

Kurisumasu
Just like in America, Christmas goes together with gifts in Japan. Japanese children will hang up large stockings decorated in green, white, red and gold colors on the wall of their bedroom on Christmas Eve, expecting Santa to deliver a gift while they sleep. Like American children, many write letters to Saint Nick, although you won’t find Japanese children baking cookies for Santa. I remember believing in Santa Claus until sometime in my junior high days, about 45 years ago. When I was a 6th-grader, I wished the Norwegian saint for a guitar. I hung up the largest stocking I could find, although it seemed too small for a guitar, and to my joy, the next morning I found my stocking tied to a shining, brand new guitar! Santa really came through that year. When I became a father, I became Santa to my daughter. Although some of my friends dressed up as Santa and presented a gift to their children by hand, I would hide my daughter’s gift somewhere in the house and put a letter written in old northern European characters into her stocking to tell her where her gifts were. 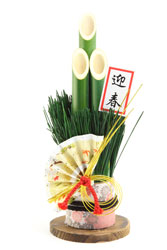 Preparing Nengajo
Even with the recent trend of using email to carry the greetings, exchanging New Year’s cards, called “nengajo” (New Year’s Greeting Card), remains very popular in Japan. Just like Christmas cards in the States, preparing nearly 100 nengajo always reminds me of just how blessed I am. In this time, however, I also often receive “mochu hagaki” (mourning-notification cards) to decline exchanging New Year’s greetings. The cards are sent by someone in mourning as a way to notify others of a significant death in their life, and to politely decline taking part in the tradition for that year. Why not try sending a New Year’s card to your Japanese friends? And when you do, be sure to hand-write names and addresses, even if you used your computer to make the cards. Then, mark the postcard with the word “NENGAJO” in red and send it out before Dec. 25. This way, the postman will be able to deliver them on time. 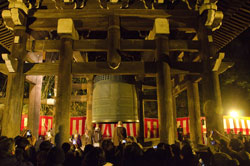 Just like others, I can’t help but get excited when New Year’s Eve arrives. Anticipated for a happier and better New Year, we are usually awake overnight on the day. With my wife and daughter, I usually visit a large market, such as the Ameyoko Street in Ueno, and join the people flocking to buy tuna, lobster, salmon and other expensive foods for New Year’s parties. In the evening, the nation-wide “Red and White” singing contest can’t be missed while sampling “toshikoshi soba” (over-year noodle). When the program has ended just before midnight, we visit a temple to hear the rings of 108 “joyanokene” bells to cleanse humanity of the 108 sins recognized by Buddhism. Our family tradition, which has slowly changed, involved everyone in the family going to a Shinto shrine after the temple visit on Jan. 1 between 1 and 3 a.m. for “hatsumode,” a traditional first temple or shrine visit of the year. After that, we would visit a beach, mountain or tall building, such as Tokyo Skytree, to enjoy the first sunrise of the year.

Did you know?: Wedding tradition in Okinawa

'Mama, What is the Meaning of Christmas?' book signing event on Yokota AB Dec. 7