Every Wednesday evening on Misawa Air Base, you may come across the sound of taiko drums beating in unison, almost as a call to battle. These drumbeats belong to the Ryushu Taiko (also known as Dragon-Eagle Taiko) team.

Consisting of Misawa servicemembers, civilians and families, the group has been practicing even during the shutdowns due to COVID-19 at the Mokuteki Community Center ballroom.

“We are allowed to keep our weekly practice sessions, since we are a small group and can easily keep a social distance,” says Kazuko North, instructor of the team. “We make sure each student wears a face mask and keeps more than 7-feet of distance throughout the practice session.”

The nine members that make up the team are divided into four classes ranging on age and skill for one-hour lessons every week.

North started this class in 1999, when, as a Japanese elementary school teacher and member of a local taiko team, her American friends asked her to teach them. For North, performing and teaching Japanese traditional performance art was a dream, but an expensive one.

A single taiko drum can start at about $6,000, so North invested some money in a few drums to start. but there were also old tires and bath towels to help the students master the technique.

Another challenge for North was finding an appropriate practice space. North said she approached the manager of the Mokuteki Community Center. North told her of the dream to start a taiko group for Americans and the manager was overwhelmed with emotion.

"The manager grabbed my arm and cried,” North recalled. "Then she said, ‘we are waiting for such a Japanese person like you. Right now, let's start.'"

North said the manager promised to provide her with the place to practice and materials (old tires and bath towels) as soon as possible.

To start a taiko team with limited resources and to maintain it for over 20 years is an impressive feat, especially when you consider that half of the team transitions every few months due to PCS or deployment. For North, however, what is important is that the taiko team is giving Misawa Air Base members memories that will last a lifetime.

“There are strict manners and methods in beating traditional drums in Japan, and it is very tough and time-consuming to master,” North said. “But, since our students can practice for only a brief period, I let them to focus on enjoying the art, rather than asking them to follow the rules and manners too strictly.”

Today, North’s taiko team is considered as indispensable to the Misawa community. They are regulars at many events including the Misawa American Day Parade and visits with local schools and other groups. They are currently practicing for a performance at the Air Force Ball tentatively scheduled for Sept. 18.

“Whenever the team performs in public, they always do excellently and impressively, despite only one-hour-per-week practices,” North said. “And I am very, very proud of them. 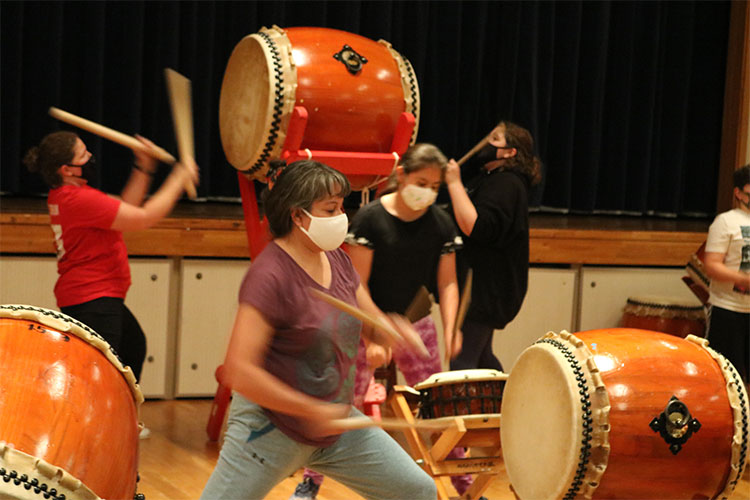