Tampa, Florida — Athens Pellegrino is a 12-year military spouse and works for the United States Air Force as a full-time civilian Budget Analyst. During the summer of 2020, she was pregnant with my daughter Callista and her son Atticus was 17 months. She received Permanent Change of Station Orders (PCS) and was set to move in the midst of a pandemic around the time of her due date.

Daily, Athens would search for bedtime stories regarding PCS for Atticus and realized that there were not many available so she decided to create her own. From this “MISSION: MY FIRST PCS” was born.

She executed the PCS seven days after she gave birth to Callista and would work on the book during her many night feedings. One night while brainstorming, she recognized how many obstacles military families face. It dawned on her that she should create a series of books to serve as resources and tools to help families during these uncertain times. Athens Pellegrino named the series, The Military Child Chronicles.

It was imperative to Athens that she create a product that would showcase the love, complex emotions, and have complimentary illustrations. She chose to self-publish to be able to control the quality, individuals involved, and distribution. Athens Pellegrino created Military Family Life Publishing and launched MISSION: MY FIRST PCS in May 2021. The Military Child Chronicles can be purchased on Amazon, Barnes & Noble, Target, Goodreads, Waterstones, and a few additional major retailors coming soon. 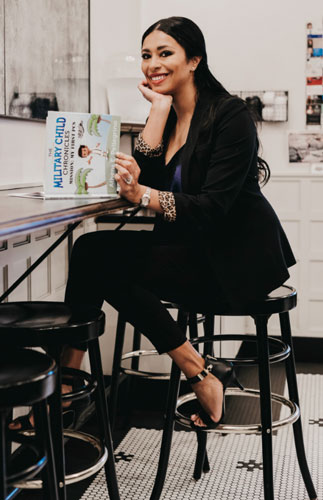 PCSing soon? The Army PCS app is here to help

Military kids are resilient, but far from immune to pandemic effects

They serve too! Camp Zama PX celebrates Month of the Military Child in April