Respect for the Aged Day

Respect for the Aged Day may call to mind Japan’s rapidly aging population, but that only underscores this national holiday’s emphasis on honoring and appreciating the contributions senior citizens have made to society.

Celebrated this year on Sept. 20, this holiday traces its origins back to 1947 when a farming village in Hyogo Prefecture proclaimed Sept. 15 as “Day for the Elderly,” or Toshiyori-no-Hi. They held a meeting to honor seniors and listened to them speak in order to benefit from their words of wisdoms. The idea spread throughout the prefecture, then spread nationwide. 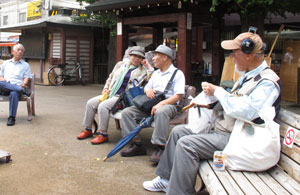 “Respect for the Aged Day (Keiro-no-Hi) was legislated in 1966 according to the National Holidays Act,” said Yukihiro Miura from the holiday section of the National Cabinet Office’s General Affairs Division. “The purpose of this holiday is to express respect for the elderly in our communities and wish them longevity.”

“I think sometime after Japanese society started recovering from the devastation of the war, people began to think of how they could appreciate the elderly who had contributed so much to society, and how to glean from their wisdom,” Miura added.

Although the holiday was originally observed on Sep. 15, the National Holidays Act was amended in 2003, introducing the so-called Happy Monday system which moved several holidays to Mondays to create three-day weekends. Respect for the Aged Day has been celebrated on the third Monday of September ever since.

On this day, many communities honor the elderly with parties or ceremonies and present them with gifts. TV stations usually air senior-related programs such as features on the number of elderly in Japan or the oldest people in the country.

And school children often visit facilities for the elderly to entertain them with song and dance.

How will you honor the elderly in your community on Respect for the Aged Day?

How old is old in Japan 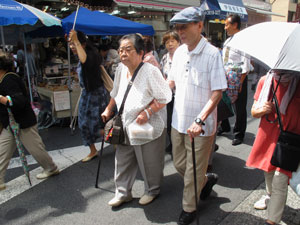 In Japan, people age 65 and older are considered elderly, according to the Act on Assurance of Medical Care for Elderly People. The act defines people 75 and older as “late stage elderly.”

There are 8 centenarians in Japan as of 2020. The number increases by 1 from the previous year.*

The number of the elderly is rapidly increasing in Japan as the number of children being born declines, causing major concerns over how a shrinking workforce will continue to fund healthcare and social security. 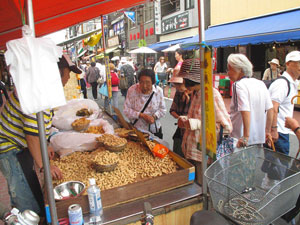 A statue of Arai Kannon (literally, washing deity) at Koganji temple in Sugamo, also known as Togenuki Jizoson, is one of the most popular temples for the elderly to visit in Tokyo.

Many believe that if you pour water on the statue and polish that part of it with a cloth that corresponds to your own bodily ailment, you will be healed. Senior citizens can be seen queuing up to wash the statue in hopes of a healing every day.

The area is not only popular because of the temple’s statue; the street the temple is on is also a well-known shopping district for older patrons. Over 200 shops line a half-mile stretch of Jizo Dori shopping street, featuring all kinds of goods coveted by the elderly such as clothes, health foods and souvenirs.

With Tokyo’s famed shopping district for young hipsters in mind, some locals have even dubbed this street, “Harajuku for old people.”

This is a great place to buy Japanese souvenirs because of variety of traditional goods – and pocketbook-friendly prices. The area is particularly lively on the 4th, 14th and 24th of every month when the temple holds a small festival. 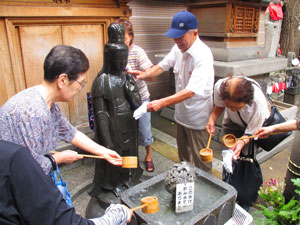 Okinawa Prefecture was once long recognized for having the highest longevity rate out of all 47 prefectures in Japan. But times have changed according to a Ministry of Health, Labor and Welfare study conducted every five years. Apparently, nothing really does last forever.

While a 1995 survey showed that overall there were 22 centenarians for every 100,000 persons in Okinawa – 3.8 times the national average at the time – survey figures show longevity has been declining in Okinawa ever since. By 2005, male Okinawans had dropped from first to 25th place.

Most recently, in 2015, Okinawan women dropped to seventh place in the survey with a life expectancy of 87.44 years, slightly higher than the ministry’s national average of 87.01. Okinawan men, however, plummeted to 36th place at 80.27 years, just shy of the national life expectancy for males of 80.77 years. The results are no surprise to Dr. Makoko Suzuki who predicted the trend a decade ago in an interview with Stars and Stripes in 2013.

Suzuki, now a retired medical doctor, Ryukyu University professor emeritus and co-author of the best-selling “The Okinawa Program: How the World’s Longest Lived People Achieved Everlasting Health,” conducted a 25-year study of the traditional Okinawa diet. He said the prefecture’s claim as a haven for centenarians (once the most per capita in the world) came from an old island lifestyle that literally has been dying out. This has opened the door to diseases associated with obesity – once rare on Okinawa – like diabetes, heart failure and strokes that are now becoming all too common.

“The chief factor is diet,” he said in 2004, pointing a finger at ubiquitous fast-food chains like A&W, McDonald’s and Kentucky Fried Chicken. “Their (younger Okinawans’) eating habits are more westernized, which raises their cholesterol.”

While older Okinawans still take walks, he added, their younger counterparts, “have the tendency to hop into a car.”

“The last two factors are the loss of the Okinawan culture and tradition in our everyday lives,” Suzuki said. “Traditionally, Okinawans were more involved with their community and religious activities, which kept them active.”

You may have heard of Golden Week, Japan’s string of four consecutive holidays from late April to early May, but you probably didn’t know that there is also a “Silver Week” which occurs once every few years in September. Here’s how it works:

Autumnal Equinox Day is a national holiday that falls on Sept. 23 (Sept. 22 during leap years). Japan’s National Holiday Act dictates that when Respect for the Aged Day, celebrated the third Monday in September, falls on Sept. 21, and it is not a leap year, the day between the two holidays becomes another holiday – National People’s Day.

Combined with the weekend that precedes the Monday holiday, you get the five-day aptly named, Silver Week. The last Silver Week occurred in 2015 after 2009. The next Silver Week will be in 2026. In the year 2021, Autumnal Equinox Day is celebrated on Sept. 23. Respect for the Aged Day falls on Sept. 20. It’s a shame that we don’t get a five-day off this year. But it can be named a “Bronze Week”, can’t it?

Kajimayaa a celebration of longevity, childhood

Did you know?: 3 most important Japanese holidays