Exam cram: ‘Tis the season in Japan to study like crazy to ‘make the cut’

Exam cram: ‘Tis the season in Japan to study like crazy to ‘make the cut’

On any given February morning, you might see hundreds of young students – some with parents, or even teachers, in tow – flocking to a nearby high school or university. Chances are they are on their way to take their entrance examinations.

Entrance exams – along with hours upon hours of cram school study – are an annual rite of passage that takes place nationwide in Japan every year. Most people take these rigorous exams at least twice in a lifetime – for high school as well as college, but those trying for private schools might try three or more times.

It seems COVID-19 has had a minor effect on the timehonored tradition of entrance exams as this year 530,367 (4,878 less) students signed up for the Common Test for University Admission, according to officials. Furthermore, schools where the examinations are taking place are making some adjustments to how the tests were taken in the past including shortening testing hours, canceling lengthy portions of the exams like interviews or essays and limiting the number of parents who can sit outside and wait for their student to take the examination. However, one cram school poll found that nearly half of the parents whose children were slated to take the exam this year said they will still go to the exam sites to cheer them on because it is an important milestone that not even a global pandemic will stop them from being a part of.

Some take more than one exam a year just to hedge their bets.

Unlike the United States, free compulsory education in Japan extends only through junior high or middle school. Families typically pay the equivalent of around $4,500 in tuition and fees per student annually for public high school. Private schools cost twice or more. And students vie to get into the best high schools just as they do colleges.

High school and college exams typically cover three to five subjects, such as Japanese, English or another foreign language, math, science and social studies. They usually take the entire day with a break for lunch.

It is widely believed that graduation from a prestigious high school and university virtually guarantees preferential treatment from prospective universities or employers after graduation. And since major universities receive four to eight times as many applicants as available slots, competition is stiff.

Many students don’t make the cut and must decide whether to enter their second or third school of choice. The other option, primarily for university candidates, is to wait until the next year and try again.

Those who do opt to wait are called “ronin,” literally master-less samurai.

To give their children an edge over the competition, many parents turn to “juku,” or cram schools, which have been doing brisk business in Japan for decades. (Industry profits were at one time in the $8.8 billion range according to Bloomberg Business Weekly.)

The Japan Juku Association estimates that there are 55,037 juku in Japan (2016) and that 50-70 percent of students who plan to take entrance exams use them.

These exams tend to focus on the quantity of knowledge rather than deeper comprehension or mastery. To put it simply, the more information from textbooks students can memorize, the better their test scores.

After regular school hours, students go to these cram schools two to five times a week to study for a couple of hours. 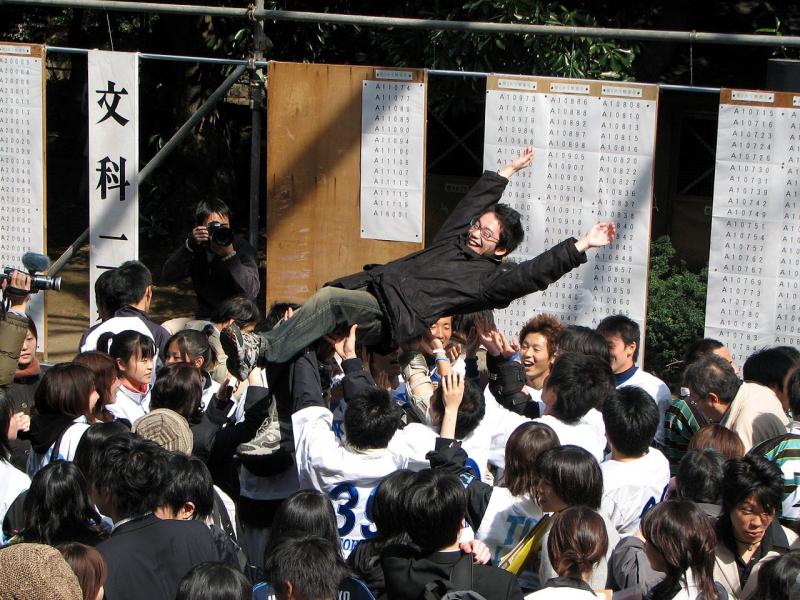 But things are changing and according to a Japan Juku Association official, so is the level of students’ ambitions. Gone are the days when most students viewed Japan’s entrance exam system as if it were a life-or-death matter.

“Many are not setting their goals very high for prestigious schools; instead they tend to be content with schools they can easily get accepted by,” the official said.

To avoid the competition altogether, some students turn to using recommendations from their existing schools to gain admittance.

So, for those who do opt for the traditional cram-and-exam method – with, perhaps, less fervor than their forefathers – how sweet is the taste of success?

Not very, according to a student who entered a private prestigious Tokyo university after cramming like crazy to make the cut.
“Once it’s over, the pressure and motivation to study are gone,” he says. “After having spent so many years studying just for exams, many of us have little sense of what comes next – or how to shape our futures.”

A little luck of the ‘ema’ for exams 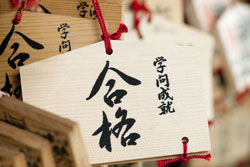 You may be familiar with bunches of small wooden plaques with drawings of horses and Japanese characters written on them that can be found hanging in Shinto Shrines. These “ema,” or horse icons, are used as prayers or wishes for good luck in certain endeavors.

Japanese believe that their wish and prayers will come true if they write them on these plaques and hang them as offerings to the Shinto gods. Some of the common wishes for success include work, family peace, health and (yes, you guessed it) school entrance examinations.

As each shrine is dedicated to certain deities, different shrines are frequented for different types of fortune. Tenjin is the Shinto god of scholars, and his shrines are called “tenmangu.”

Many students who are going to take entrance exams visit Futenmangu in Futenma, Okinawa; Dazaifu Tenmangu in Fukuoka Prefecture; and Yushima Tenjin in Tokyo to offer ema for success. There are many others elsewhere throughout the nation.

In February, you will likely see many students offering these ema at shrines near you.

7 tips for teens going to college

Where to start college?