The U.S. Army Japan Band performs during a holiday concert, titled “An American Holiday Festival,” Dec. 17 at Zama Harmony Hall in Zama City, Japan. This year marked the return of an annual collaborative holiday concert, the first to be held at the venue since 2019 due to its cancellation last year because of COVID-19. (Photos by Noriko Kudo)

CAMP ZAMA, Japan (Dec. 21, 2021) – This year marked the return of an annual collaborative holiday concert held in Zama City and featuring a performance from the U.S. Army Japan Band.

Held Dec. 17 and 18 at Zama Harmony Hall, the concert, titled “An American Holiday Festival,” was the first to be held at the venue since 2019 due to its cancellation last year because of COVID-19. Apart from the canceled show, the concert has been an annual event at Harmony Hall since 2013.

Chief Warrant Officer 3 Richard Chapman, commander of the USARJ Band, introduced the Kanagawa Prefectural Police Band and the Zama City Music Association, both of which collaborated with his band onstage during the show.

Chapman said he and all the musicians were happy to return to Harmony Hall for the first time in two years, and “to share that celebration once again with [our] friends and neighbors from Zama City.”

“We look forward to continuing to build the important relationship between USARJ and our host town [of] Zama City,” Chapman said.

Staff Sgt. Harrison Reed, a trombonist assigned to the USARJ Band, said he and the band members were all very excited to be performing in front of audience again. Most of the band’s performances in the two years since the COVID-19 pandemic began had been canceled or changed to “virtual” online performances.

“There is nothing like the feeling of being in front of a real audience in a real concert hall,” Reed said. “This is what the USARJ Band loves to do.”

Reed said he hopes the audience got to experience “that ‘wow’ moment” of getting a chill from hearing a beautiful chord, feeling nostalgic, or getting into the Christmas spirit while enjoying a show with their loved ones. He also hopes traditions like the Christmas concert can remain a part of the local pulse.

“Listening to music together and feeling the emotions that stirs up can help you see what is so great about this world,” Reed said. “It is the shared experience we all need right now.” 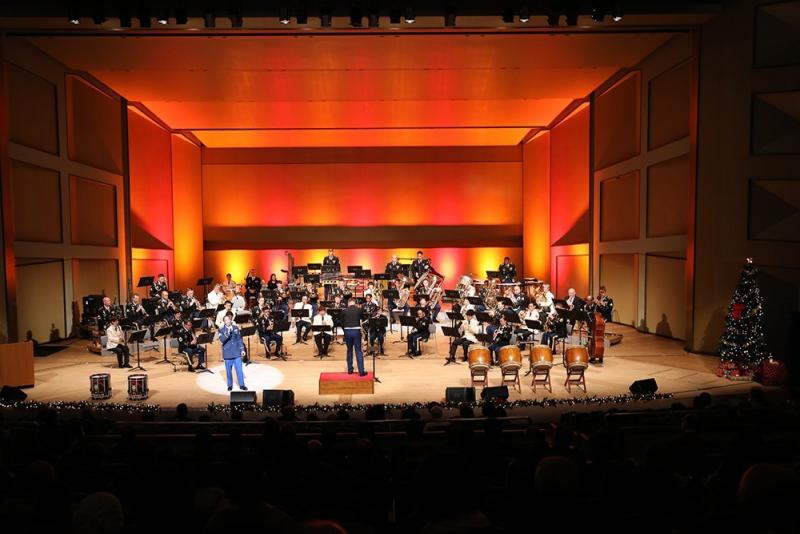 Mariko Maejima, a first-time attendee at the concert, said, “I enjoyed every single musical performance tonight, so the two-hour concert seemed to go by in the blink of an eye.”

Maejima said she attends the USARJ Band’s mini concerts at local festivals and events every chance she gets, but she noted that the holiday concert was exceptional.

Zama City Mayor Mito Sato said the concert has become so popular that the city has to hold a lottery every year for the tickets. This year, there were nearly 3,500 lottery entrants for the two performance dates.

The Zama City Office continues to receive great feedback from the audience about the holiday concert, and the desire for tickets grows more every year, Sato said.

“The USARJ Band’s holiday concert is definitely one of the highlights of our local events,” Sato said.

Having both Japanese citizens and U.S. Army Soldiers and civilians residing together in Zama City, and being able to share in events like the holiday concert, gives both communities an opportunity to learn about each other’s culture and to consider different perspectives in order to enhance the bilateral relationship between the two, Sato said.

“I believe heart-to-heart communication is a small step toward fostering a harmonious relationship,” Sato said.