For the past six years, retired gunnery sergeant Bruce Merritt brought smiles to children and their parents visiting Yokota Air Base’s Commissary. Wednesday was the 61-year-old cashier’s final day checking groceries, much to the chagrin of commissary patrons.

“Mr. Bruce was the highlight of our commissary trips,” said Yokota spouse Patricia Brandon. “He always made us smile and took care of us, we will definitely miss seeing him at the commissary.” 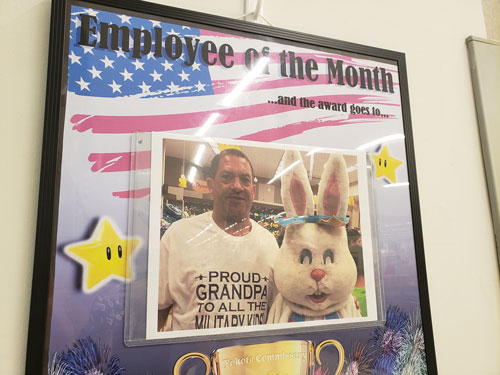 Merritt, who was quick with smiles and kind words, had to leave his job at the commissary due to the Department of Defense’s Five-Year Rule.

Established in 1966, the rule limits civilian DOD employees hired in the United States to five years of continuous overseas service before they must return to the U.S.

Merritt came to Yokota in July 2014 because the C-130’s reminded him of his younger brother, who had died in a plane crash.

“I chose Yokota because of that airplane, the C-130, I just feel like every time I see that plane,” the Lynch Station, Va., native said. “I’m closer to my brother.”

During his first year at the commissary, Merritt said he was relatively reserved until a little girl came through his checkout line with her mother, sparking a friendship.

“I just said something to this little girl, and she took a liking to me,” he recalled fondly. “After that, every time the family would come into the Commissary, she would look for me and we just built a bond.”

In 2015, Merritt saw that the Commissary didn’t have anything special set up for April’s Month of the Military Child, so he made room in his checkout line for a little helper. 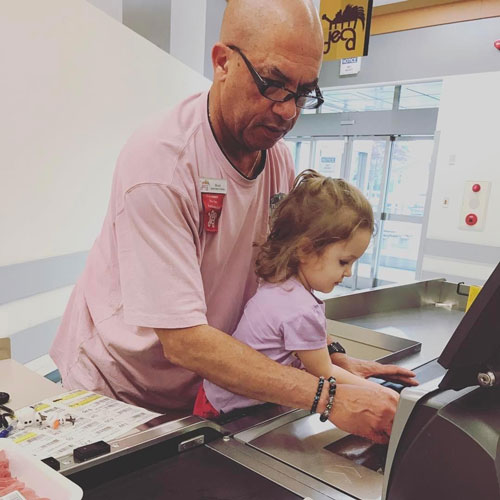 “This little girl came in with her family and she was kind of upset, so I asked the family if I could have her help scan the items,” he said. “It was the happiest I had ever seen the little girl.”

The child’s mother took a video and posted it to a local Facebook group.  After that, Merritt said he  often noticed that his line would be the longest because kids wanted help him ring up the groceries or just talk to him.

“Many military kids don’t have relatives or loved ones near, and he became the surrogate ‘Commissary Grandpa’ to them all,”  said Jaclyn Escalera. “He was someone who took the time to teach them and show them that they are important.”

Merritt isn’t done with Yokota. He might not be able to work for the commissary anymore as a DOD civilian, but he is currently looking for a job on base as a contractor or as a non-appropriated funds employee.

“This is my family,” Merritt said matter-of-factly. “They’ll see me again.”

Happy 73rd birthday to the USAF!